Since the outbreak of COVID19, our attention to the epidemic has been increasingly drawn. The prevailing view is that our understanding of monkeypox is not as ignorant as in the early stage of SARS-CoV-2, which strongly advanced our studies in overcoming this obstacle. In addition, smallpox vaccines have demonstrated approximately 85% protection effectiveness against the infection of monkeypox viruses, which is far lower than coronavirus in terms of transmission.

Monkeypox, a "close relative" of smallpox that has left terrible memories on humankind, was recently diagnosed with over 100 cases in the non-endemic areas outside Central and West Africa. As of May 21, the World Health Organization (WHO) has received a total of 92 laboratory-confirmed cases and 28 suspected cases of monkeypox under investigation in 12 countries and regions, including the United Kingdom, United States, Portugal, Spain, Italy, and Sweden. All cases have been found to include young males predominantly, with no associated deaths reported yet. 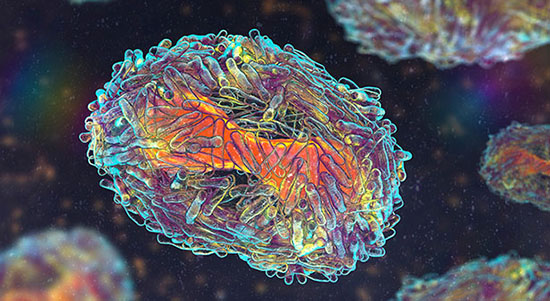 Monkeypox virus belongs to the genus Orthopoxvirus of the Poxviridae family and is a zoonotic infectious disease. Since the global eradication of smallpox in 1980, monkeypox has become a major epidemic of human orthopoxvirus infection. Infection with the monkeypox virus is often accompanied by clinical features such as fever, severe headache, swollen lymph nodes, myalgia, and weakness, among which lymphatic symptoms are a distinguishing feature of monkeypox.

In 2018, the WHO included monkeypox in the priority list of diseases to control, that is, a rapid assessment of monkeypox is needed to formulate countermeasures. Moreover, it is also mentioned that smallpox vaccines and related treatment methods provide good references for the treatment and prevention of monkeypox.

The transmission route of the virus has an important impact on the spreading and growth of the epidemic. As a zoonotic disease, monkeypox was transmitted to humans through direct contact with the blood, body fluids, lesions of skins, or mucous membranes of infected animals. Human-to-human transmission of monkeypox is caused by close contact with respiratory secretions, skin lesions, or recently contaminated objects of the infected person.

Currently, there is no dedicated monkeypox vaccine, but the WHO has revealed data indicating that smallpox vaccines are 85% effective against monkeypox viruses. Moreover, the United Kingdom has started offering smallpox vaccines to healthcare workers or personnel at risk of monkeypox viruses, with mainly symptomatic and supportive clinical observations. (The US FDA approved Siga Technologies' Tecovirimat capsules for the treatment of smallpox on July 13, 2018. Tecovirimat targets the orthopoxvirus VP37 protein and inhibits its activity, blocking its interaction with cellular GTPase and TIP47.)

In order to provide better services for scientific researchers, Creative BioMart designed proteins according to the gene sequence of Monkeypox viruses. We have successfully developed various recombinant proteins related to Monkeypox viruses, and you're more than welcome to contact us for more information.