Nature: Fighting Alzheimer's Disease from the Perspective of Immune Transmitter

Nature: Fighting Alzheimer's Disease from the Perspective of Immune Transmitter 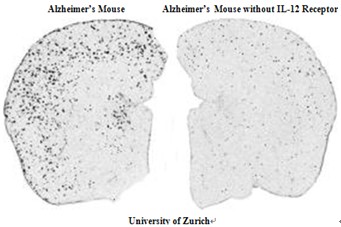 Nov. is the national Alzheimer’s disease (AD) Awareness Month for America. And it widely affects old people around the world. It is one of the common forms of dementia. According to some statistics, every seven second, there will be one people suffer AD. In Germany and Switzerland alone, around 1.5 million people are affected. And forecasts predict a doubling of the number of patients worldwide within the next 20 years. Thus how to prevent and treat this disease is becoming more and more important.

There is no clear reason for AD. We have known it is a primary degenerative brain disease. The accumulation of particular abnormal proteins, including amyloid-ß (Aβ) among others, in patients' brains plays a central role in this disease. Some studies from American colleagues have found that AD patients have increased level of p40 in blood plasma, which is a component of the cytokines IL-12 and IL-23.

Recently, a research team from Charité -- Universitätsmedizin Berlin and the University of Zurich has just published a new therapeutic approach in fighting Alzheimer's disease on Nature Medicine. But this research has proceeded for 6 years. And this new approach brings hope for the prevention and treatment of AD on humans.

They did the experiment by blockade of an immune system transmitter resulting in reduced pathological Alzheimer's disease changes in mice. Their research showed that turning off particular cytokines reduced the Alzheimer's typical amyloid-ß deposits in mice with the disease. As a result, the strongest effects were demonstrated after reducing amyloid-ß by approximately 65 percent, when the immune molecule p40 was affected.

Then they did further experiments and results showed that substantial improvements in behavioral testing resulted when mice were given the antibody blocking the immune molecule p40. This effect was also achieved when the mice were already showing symptoms of the disease.

Based on the current study, they also found a higher level of p40 molecules in Alzheimer's patients' brain fluid as the previous study showed.

In overall consideration, Prof. Heppner and Prof. Becher suspect that cytokines IL-12 and IL-23 are not causative in the pathology, and the mechanism of p40 in Alzheimer's requires additional clarification. However, since some medications that suppress p40 in humans have been applied and showed safe effect, they believe their results justify the step toward clinical studies in humans. As a result, they plan to collaborate with a suitable industrial partner.

Now, the goal is to bring the new therapeutic approach to Alzheimer patients quickly.