Members of basic helix loop-helix (bHLH) transcription factors have two highly conserved domains that together make up 60 amino acid residues. The amino-terminal end of the bHLH structure contains the basic domain and binds hexanucleotide DNA sequences called E-boxes; different bHLH subfamilies bind different E-box consensus sequences. The carboxy-terminal end of the bHLH contains the HLH domain, which is responsible for binding to other protein subunits to form homodimeric and heterodimeric complexes. bHLH transcription factors are involved in the regulation of the cell cycle and many developmental processes including cardiovascular development, hematopoiesis, stem cell maintenance, skeletal muscle development, neurogenesis, and embryogenesis. Finally, some bHLH transcription factors induce tumorigenesis-related epithelial-mesenchymal transition (EMT). The basic helix- loo p-helix (bHLH) protein constitutes a family of transcription factors that play an important role in the regulation of eukaryotic growth and development. Since the first bHLH protein structure was analyzed in 1989, more than 1000 bHLH sequences have been identified in different organisms. 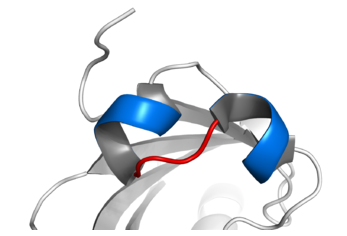 AHR is a 110 kDa member of the bHLH/PAS transcription factor family. It is widely expressed (breast, lung, liver), and serves many functions. First, it binds multiple xenobiotic chemicals in the cytoplasm. This induces dimerization with ARNT, translocation to the nucleus, and activation of P450 genes such as CYP1A1 and UGT1A6. Second, it appears to block cell cycle progression, possibly via a down-regulation of CDK proteins. And third, it blocks apoptosis by interacting with E2F1, thus silencing TP73 and Apaf1 genes.

Animal bHLH is divided into 45 family members due to the different functions of the genes it regulates; At the same time, according to their target gene and their structural characteristics, they are divided into six groups. The study found that bHLH plays an important regulatory role in animal growth and development, and A and E are key factors in the regulation of nervous system differentiation and development.

The family A of bHLH transcription factors

The E-group bHLH transcription factor family, including the Hes and He y families, participates in the regulation of neuronal differentiation and development, and their common feature is that they contain the Orang e domain. The Hes family has eight members that are expressed at different stages of the development of the nervous system and co-regulate the development of the nervous system with other members of the bHLH transcription factor family, as well as the sonic hedgehog and Notch signaling pathways.

Since many bHLH transcription factors are heterodimers, their activity is generally highly regulated by subunit dimerization. The expression or availability of one subunit is usually controlled, while the other subunit is constitutive. Many known regulatory proteins, such as the Drosophila melanogaster, have a helix-loop-helical structure but lack a basic region, thereby rendering themselves incapable of binding to DNA. However, they are capable of forming heterodimers with proteins having a bHLH structure and inactivating their ability to act as transcription factors.