Cytoskeletal proteins are proteins that make up the cytoskeleton, flagella or cilia of cells. Generally, cytoskeletal proteins are polymers, and include tubulin (the protein component of microtubules), actin (the component of microfilaments) and lamin (the component of intermediate filaments. The cytoskeleton is a dynamic 3-dimensional structure that fills the cytoplasm, and is present in both eukaryotic and prokaryotic cells. The cytoskeleton acts as both muscle and skeleton, and plays a role in cell protection, cell motility (migration), cytokinesis, intracellular transport, cell division and the organization of the organelles within the cell.

The elements of the cytoskeleton are not independent. Different filaments are connected to one another, and to the surface of the cell. Motor proteins, which not only connect to the cytoskeleton but drive up and down filaments, are a special case. Crawling cells need to attach to surfaces, tissues in multicellular organisms must be attached to one another, and it is obviously important to connect the cytoskeleton to sites of attachment. A number of proteins are responsible for connecting the actin cytoskeleton to the plasma membrane. The best characterized system is in red blood cells (erythrocytes), which need to maintain a large surface area for maximal gas exchange but remain flexible enough to travel through capillaries. The characteristic biconcave shape is generated using tension from a network of F-actin, attached to the membrane through large complexes of several proteins. Two proteins, band III and glycophorin, are integral membrane-spanning proteins, and join the complexes to the membrane itself. Actin is bound by a large protein called spectrin, which is in turn connected to band III through ankyrin and to glycophorin. The net result is a compact crosslinked array of protein connecting multiple actin filaments to the whole area of the membrane. 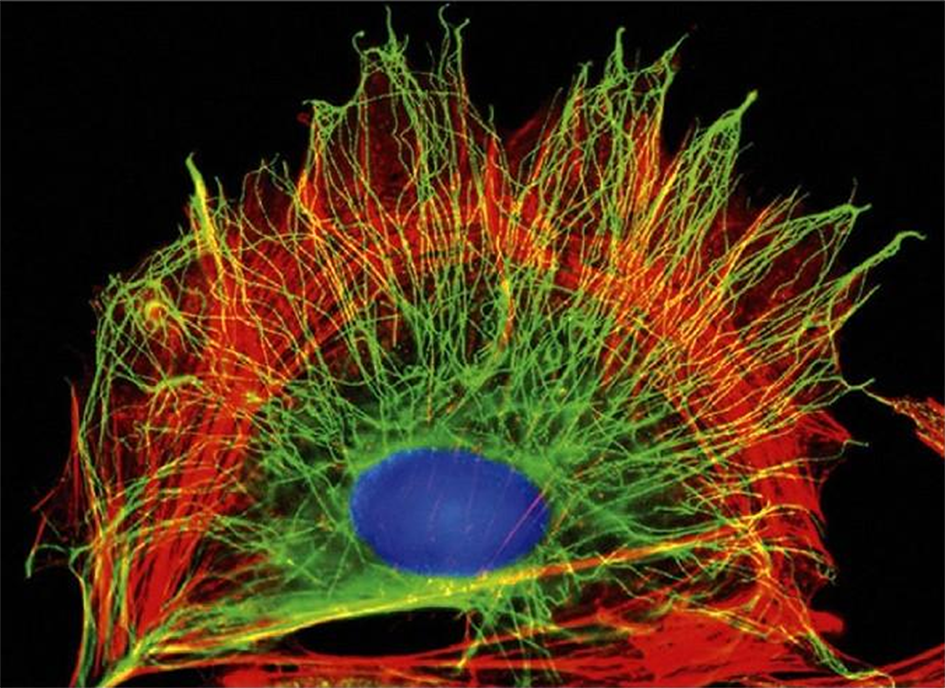 Figure 1. The cytoskeleton. Actin filaments are shown in red, microtubules in green, and the nuclei are in blue.

Since the cytoskeleton is central to the lives of cells, it is hardly surprising to find that it is highly relevant to modern medicine. Several pathogens (for example, the bacterium Shigella and Vaccinia virus) make use of the host cytoskeleton to gain entry into and to infect neighbouring cells. Other organisms (e.g. the death cap toadstool Amanita phalloides and the meadow saffron Colchicum) make toxins that interfere with particular aspects of cytoskeletal function. Conversely, an increasing number of medicines work by attacking the cytoskeleton of disease-causing cells, for example paclitaxel for cancer and fluconazole for yeast infections.