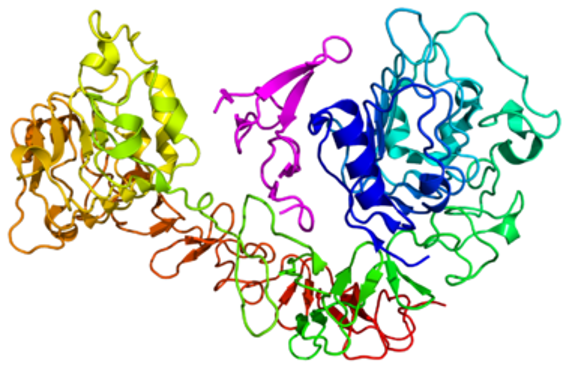 Epidermal cell growth factor receptor (EGFR) is a huge transmembrane glycoprotein, with a molecular weight of about 180 kDa, and has ligand-induced tyrosine protein kinase activity. It is a member of the conserved receptor family of ErbB. T Other members of this family include HER2/Neu/ErbB2, HER3/ErbB3 and HER4/ErbB4. The common feature of ErbB receptor is that it contains an extracellular (EC) ligand binding region, is a single transmembrane region composed of two repeated cysteine-rich regions, and contains tyrosine protein kinase and autophosphate intracellular sequence of the site. When bound to a ligand, the receptor dimerizes, which is essential for changing the high affinity state between the ligand and the receptor and for the receptor to transmit phosphorylation signals between molecules. The formation of homodimers or heterodimers depends on the relative levels of the four receptors and the activated ligands.

Epidermal growth factor receptors can be activated by binding to their specific ligands, including epidermal growth factor and transforming growth factor alpha (TGFα). ErbB2 has no known direct activation ligand and may be in an activated state heterodimerized or active with other family members (eg, EGFR). After being activated by its growth factor ligand, EGFR transitions from an inactive monomeric form to an active homodimer. Although there is evidence that pre-formed inactive dimers may exist before ligand binding. In addition to forming a homodimer in vitro after ligand binding, EGFR may pair with another member of the ErbB receptor family, such as ErbB2/Her2/ Ne, to create an activated heterodimer. 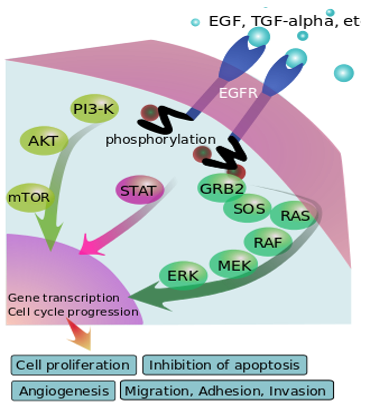 EGFR dimerization stimulates its intrinsic intracellular protein tyrosine kinase activity. As a result, several tyrosine (Y) residues were autophosphorylated in the C-terminal domain of EGFR. These include Y992, Y1045, Y1068, Y1148, and Y1173, as shown below. This autophosphorylation causes downstream activation and signaling of several other proteins that bind to phosphorylated tyrosine through their own phosphotyrosine-binding SH2 domain. These downstream signaling proteins initiate multiple signal transduction cascades, mainly the MAPK, Akt, and JNK pathways, leading to DNA synthesis and cell proliferation. Such proteins regulate phenotypes, such as cell migration, adhesion, and proliferation. Receptor activation is important for the innate immune response in human skin. The kinase domain of EGFR can also cross phosphorylate tyrosine residues of other receptors that it aggregates with, and can activate itself in this way.\ 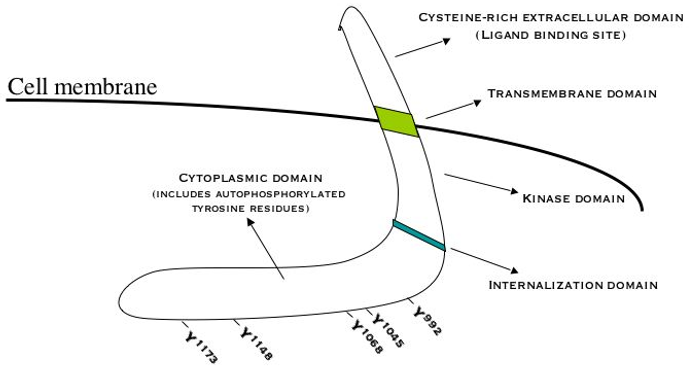 HER2 is a member of the human epidermal growth factor receptor (HER / EGFR / ERBB) family. Amplification or overexpression of this oncogene has been shown to play an important role in the occurrence and development of certain aggressive breast cancers. In recent years, the protein has become an important biomarker and therapeutic target for about 30% of breast cancer patients. 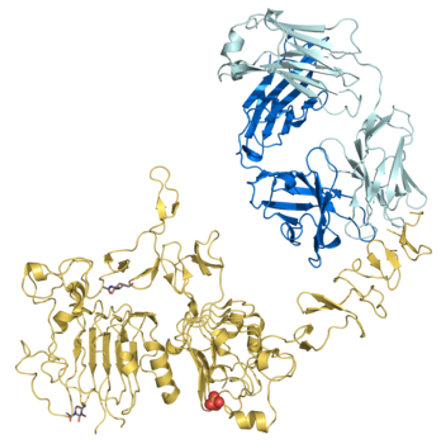 Figure 4. Ribbon diagram of the Fab fragment of trastuzumab, a monoclonal antibody, bound to the extracellular domain of HER2.

HER3 (human epidermal growth factor receptor 3) is a membrane-bound protein that is encoded by the ERBB3 gene in the human body. HER3 is a member of the epidermal growth factor receptor (EGFR/ERBB) family of receptor tyrosine kinases. It is known that the kinase-impaired ErbB3 forms active heterodimers with other members of the ErbB family, most notably ErbB2 with impaired ligand binding. ErbB3 has been shown to bind to heregulin and NRG-2. Ligand binding results in conformational changes that allow for dimerization, phosphorylation, and activation of signal transduction. ErbB3 can heterodimerize with any of the other three ErbB family members. Theoretically, ErbB3 homodimer will not work, because the kinase-impaired protein needs its binding partner to be phosphorylated to become active. Unlike other ErbB receptor tyrosine kinase family members, which are activated by autophosphorylation during ligand binding, ErbB3 was found to be destroyed by the kinase and only has 1/1000 of the autophosphorylation activity of EGFR, and cannot phosphorylate other proteins. Therefore, ErbB3 must act as an allosteric activator.

Figure 5. Structure of the ERBB3 protein.

HER4 an enzyme encoded by the human ERBB4 gene. Alternative splicing variants encoding different protein isoforms have been described. However, not all variants have been fully characterized. The receptor tyrosine protein kinase erbB-4 is a receptor tyrosine kinase and is a member of the epidermal growth factor receptor family. ERBB4 is a single-channel type I transmembrane protein with multiple furin-rich cysteine domains, tyrosine kinase domains, phosphoinositide 3-kinase binding sites, and PDZ domain binding motifs. This protein binds to and is activated by neuroregulins 2 and -3, heparin-bound EGF-like growth factor, and beta cellulose. Ligand binding induces a variety of cellular responses, including mitosis and differentiation. A variety of proteolytic events can release cytoplasmic and extracellular fragments.

Figure 6. Structure of the ERBB4 protein.