Fibroblast growth factor receptors consist of extracellular ligand domains that bind to fibroblast growth factor, which is the largest member of the growth factor ligand family, including 22 members. The extracellular ligand domain consists of three immunoglobulin-like domains, a single transmembrane helix domain, and an intracellular domain with tyrosine kinase activity. Natural alternative splicing of four fibroblast growth factor receptor (FGFR) genes has resulted in the production of more than 48 different FGFR isoforms. These isoforms have different ligand binding properties and kinase domains, but all share a common extracellular region composed of three immunoglobulin (Ig) -like domains (D1-D3), and therefore belong to the immune Globulin superfamily. The three immunoglobulin (Ig) -like domains-D1, D2 and D3- represent an acidic amino acid segment ("acid box") between D1 and D2. The "acid box" can be involved in regulating the binding of FGF and FGFR. The immunoglobulin-like domains D2 and D3 are sufficient to bind FGF. Each receptor can be activated by several FGFs. In many cases, FGF itself can also activate more than one receptor. However, FGF7 can only activate FGFR2b, and it has recently been found that FGF18 can activate FGFR3. The fifth FGFR protein gene FGFR5 has also been identified. In contrast to FGFR 1-4, it lacks a cytoplasmic tyrosine kinase domain and an isoform FGFR5γ, and contains only extracellular domains D1 and D2. FGFR is known to dimerize into heterodimers and homodimers.

Fibroblast growth factor receptors are related proteins that are involved in important processes such as cell growth and division (proliferation), cell maturation (differentiation), angiogenesis (angiogenesis), wound healing and embryo development. The FGFR2 protein spans the outer membrane around the cell, so one end of the protein remains in the cell and the other end protrudes from the outer surface of the cell. This localization allows the FGFR2 protein to interact with specific growth factors outside the cell and receive signals that help the cell respond to its environment. When growth factors are attached to the FGFR2 protein, the receptor triggers a series of chemical reactions within the cell, instructing the cell to make certain changes, such as maturation to perform special functions. FGFR2 protein plays an important role in bone growth, especially during prenatal development (embryonic development). For example, this protein signals that certain immature cells in developing embryos become bone cells and form head, hands, feet, and other tissues. There are several slightly different versions of the FGFR2 protein (isoforms). Specific patterns of these isoforms exist in human tissues, and these patterns may change throughout growth and development. 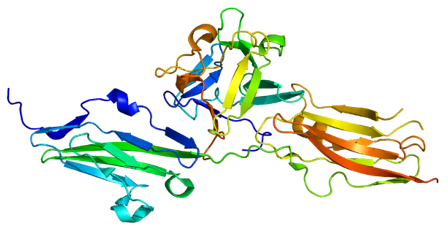 Figure 1. Structure of the FGFR2 protein.

FGFR3 is also called CD333 (differentiation cluster 333). The gene is located on chromosome 4 and is expressed in tissues such as cartilage, brain, intestine and kidney. The FGFR3 gene can produce various forms of FGFR3 protein. This position varies depending on the isoform of the FGFR3 protein. The functional mutation of FGFR3 was obtained to inhibit chondrocyte proliferation and became the basis of cartilage dysplasia and cartilage dysplasia. The full-length representative protein will consist of an extracellular region consisting of three immunoglobulin-like domains, a single hydrophobic transmembrane segment, and a cytoplasmic tyrosine kinase domain. The extracellular part of the protein interacts with fibroblast growth factors to move a series of downstream signals, which ultimately affects the cell's mitosis and differentiation. This particular family member combines acidic and basic fibroblast growth factors and plays a role in bone development and maintenance.

Figure 2. Structure of the FGFR3 protein.

In 2016, a gene sequencing study involving 4,853 cancer patients showed that 7.1% of cancer patients had abnormal FGFR genes, the most common being FGFR1 gene amplification, accounting for 50%. Patients with bladder cancer had the highest percentage of FGFR gene abnormalities at 32%, breast cancer at 18%, endometrial cancer at 13%, lung squamous cell carcinoma at 13%, and ovarian cancer at 9%. details as follows. The FGFR gene family has four siblings, including FGFR1/2/3/4, and common types of mutations include gene amplification/fusion/deletion mutations. 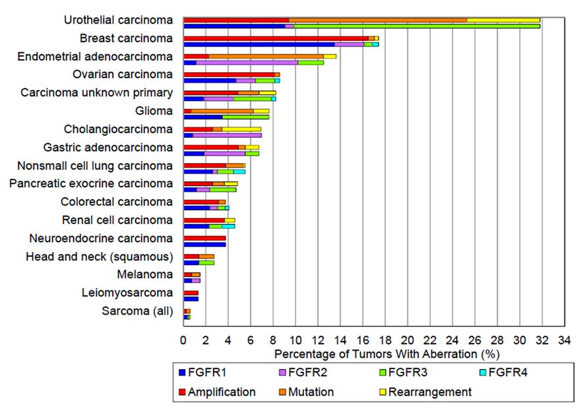