Fibronectin is a large molecular extracellular membrane protein that exists on the surface of various animal cells and is the main non-collagenous glycoprotein in the extracellular matrix and basement membrane. It plays a central role in cell adhesion and can regulate cell polarity, differentiation and growth. After limited proteolysis, it can be cleaved into several domains, which can bind to fibrin, heparin, collagen, DNA, and cell surface receptors. 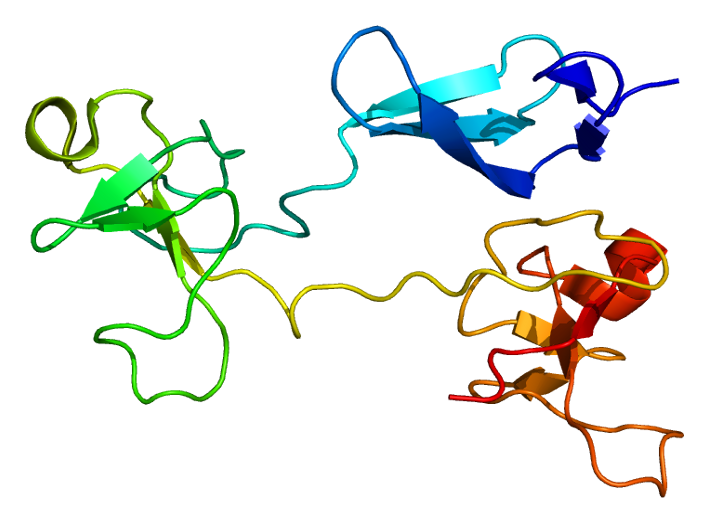 Figure 1. Structure of the FN1 protein.

Form and structure of fibronectin

Figure 2. The modular structure of fibronectin and its binding domains.

Fibronectin is widely involved in processes such as cell migration, adhesion, proliferation, hemostasis, and tissue repair. It mobilizes the mononuclear phagocytic system to remove harmful substances from damaged tissues and has the role of growth factor. Fibronectin, as a matrix for cell culture, can improve the adherence and confluence of a variety of cells, shorten the confluence time of cells, make the cell morphological structure good, enhance the metabolic rate, and significantly increase the speed of DNA, RNA and protein synthesis; As the rate increases, the survival rate of the primary culture increases. Coating fibronectin on the microsphere carrier as a medium for mass production of cells can save space and raw materials, and become a basic substance for the production of new drugs by applying large-scale cell culture technology.

The role of fibronectin in some aspects

Fibronectin is released from platelets in the coagulation stage of the early stage of trauma, and through the cross-linking of plasma transglutaminase and fibrin, it exerts adhesion, chemotaxis, conditioning and phagocytosis. Fibronectin activates neutrophils, enhances their adhesion, and accelerates their accumulation into the wound area. Fibronectin is an important chemokine in fibroblasts in the middle of wound repair. When fibronectin and fibrin are crosslinked, they adhere to the blood clot, which helps the fibroblasts to move on it and quickly enter the injury area. Fibroblasts that enter the injury area can secrete a large amount of fibronectin and are deposited in the intercellular substance together with type III collagen. During the formation and maturation of granulation tissue, fibroblasts and keratinocytes have a phagocytosis effect on fibronectin-coated collagen or tissue fragments. Fibronectin-attached fibroblasts are present at the wound edges and in granulation tissue. As a matrix factor with important biological functions, fibronectin plays an important role in various stages of wound repair.

As extracellular matrix, fibronectin is closely related to the occurrence, development and prognosis of laryngeal, bladder and gastric cancers. Interstitial changes of laryngeal squamous cell carcinoma are mainly affected by interstitial fibronectin. The detection of fibronectin, ColⅠ and Col Ⅳ has certain significance for predicting cervical lymph node metastasis, determining the timing of selective neck dissection, determining the scope of the primary tumor, and estimating the prognosis of patients. Urinary fibronectin and urinary fibronectin / CR can be used as effective indicators for prognosis evaluation of bladder cancer patients. The degree of changes in basement membrane fibronectin and interstitial fibronectin is closely related to tumor development and malignancy. Therefore, changes in fibronectin expression in gastric cancer tissue can be used as one of the indicators for judging the prognosis, and fibronectin is used as a tumor. The new goals of treatment provide a theoretical basis.

As an extracellular matrix protein, fetal fibronectin (FFN) mediates the interaction between the fetal membrane and the uterine decidua. In early pregnancy, FFN appears in cervical and vaginal secretions, but after 20 weeks of pregnancy, FFN positive indicates that the adhesion of placenta to uterine decidua is damaged.