Gap junctions are specialized intercellular connections between a variety of animal cell types that directly connect the cytoplasm of two cells, allowing various molecules, ions, and electrical impulses to pass directly through the regulatory gates between cells. A gap junction channel consists of two linkers (or half channels) that connect the intercellular spaces. The gap junction is similar to the cytoplasmic bacteria that connect plant cells. Gap junctions occur almost in all tissues of the body, except for fully developed skeletal muscles and active cells such as sperm or red blood cells. However, gap junctions are not found in simpler organisms such as sponges and slime molds. Gap connections can also be referred to as gums or macula. There are some similarities between ephapse and gap connections, but according to modern definitions, the two are different. 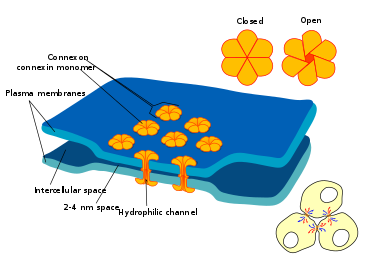 1. DNA to RNA to Connexin protein.

3. 6 Connexins create one Connexon (hemichannel). When different connexins join together to form one connexon, it is called a heteromeric connexon.

In vertebrates, the gap junction hemichannel is primarily a homohexamer or heterohexamer of connexin. The gap junction of invertebrates contains proteins of the innexin family. Innexins have no apparent sequence homology to connexin. Although connexins differ in sequence, the similarity of connexins to connexins is sufficient to indicate that connexins form gap junctions in vivo in the same manner as connexins. The recently characterized Pannexin family was originally thought to form intercellular channels (whose amino acid sequence is similar to Innexins), actually acting as a single-membrane channel in communication with the extracellular environment, and was shown to pass calcium and ATP: in the gap At the junction, the intercellular gap is between 2 and 4 nm, the unit connections in each cell membrane are aligned with each other, and the gap junction channels formed by two identical hemi channels are called isotypes, and gap junction channels with different hemichannels It is called a heterotypic. Conversely, a hemichannel with a homogeneous connexin is called a homomer, and a hemichannel with a different connexin is called a heteromer. It is thought that the channel composition affects the function of the gap junction channel, and the connexin is well characterized. Prior to ubiquitin, genes encoding connexin gap junction pathways are classified into one of three categories based on gene mapping and sequence similarity: A, B, and C. However, the connexin gene does not directly encode the expression of gap junction channels; rather, it is expressed by connexins. Genes can only produce proteins that make up gap junction channels. Alternative nomenclature systems based on the molecular weight of the protein are also popular (eg, connexin43 = GJA1, connexin30.3 = GJB4).

Ensures that the molecules and currents connected through the gap do not leak into the intercellular space.

To date, five different functions have been attributed to gap junction proteins:

Electrical and metabolic coupling between cells.

Electrical and metabolic exchange through a half channel.

Role of the carboxy terminus in the signaling cytoplasmic pathway (Cx43).

Figure 2. Light microscope images do not allow us to see connexons themselves but do let us see the fluorescing dye injected into one cell moving into neighboring cells when gap junctions are known to be present.