The Golgi apparatus is an organelle composed of a number of flat vesicles with secretion as a primary function. The Golgi is a highly polar organelle formed by the stacking of several flat vesicles. It is often distributed between the endoplasmic reticulum and the cell membrane, and is arcuate or hemispherical. The convex one facing the endoplasmic reticulum is called a forming face or a cis face. The concave one facing the plasma membrane is called a mature face or a trans face. There are some large or small transport vesicles on both the cis and the back. In polar cells, the Golgi is often distributed in a large amount in the cytoplasm at the secretory end. Because it looks very like the smooth endoplasmic reticulum, some scientists believe that it evolved from the smooth endoplasmic reticulum. 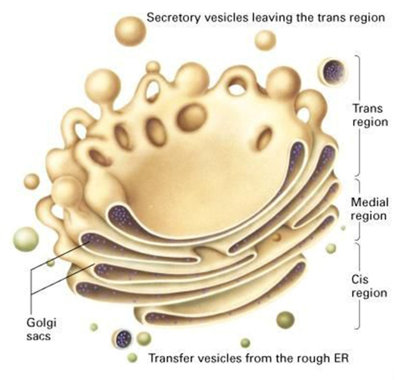 N-linked sugar chain synthesis begins in the endoplasmic reticulum and is completed in the Golgi apparatus. Glycoproteins formed in the endoplasmic reticulum have similar sugar chains. After entering the Golgi apparatus from the Cis surface, a series of orderly processing and modification occurred during the transport between the membrane sacs. Part of the mannose was removed, but different types of sugar molecules were sequentially added by various glycosyltransferases to form oligosaccharide chains with different structures. The spatial structure of a glycoprotein determines which glycosyltransferase it can bind to and undergoes specific glycosylation modifications.

Responsible for processing, classifying, and exporting proteins synthesized by cells. The process is to synthesize proteins on the RER → enter the ER cavity → form vesicles by budding → enter CGN → process in media Gdgi → form cysts on TGN Vesicle → Vesicle fuses with plasma membrane and is discharged.

3. Transformation of the membrane

The Golgi membrane is between the endoplasmic reticulum and the plasma membrane in both thickness and chemical composition. Therefore, the Golgi apparatus performs the function of membrane transformation, and the new membrane synthesized on the endoplasmic reticulum is transferred to the Golgi apparatus and modified And processing to form a fusion with the transport membrane, so that the newly formed membrane is integrated on the plasma membrane.

For example, the N- or C-terminus of a protein is excised to become an active substance (insulin C-terminus) or a precursor containing multiple identical amino sequences is hydrolyzed into an active polypeptide, such as a neuropeptide.

5. Participate in the formation of lysosomes

It is generally believed that the formation of primary lysosomes is similar to the formation of secreted granules and also originates from Golgi vesicles. Primary lysosomes and secretory particles (mainly refer to some zymogen particles) are essentially identical because lysosomes contain multiple enzymes (mainly various hydrolytic enzymes). Participate in the role of catabolites. The difference is that the zymogen granules are excreted outside the cell to play a role, while the enzymes in the lysosome mainly function inside the cell.