Heparan sulfate proteoglycan (HSPG) is a cell surface and extracellular matrix macromolecule composed of a core protein modified with a covalently linked glycosaminoglycan (GAG) chain. In vitro studies have demonstrated the role of these molecules in many cellular functions, and recent in vivo studies have begun to elucidate their basic functions in development. In particular, HSPG plays a key role in the regulation of key developmental signaling pathways, such as Wnt, Hedgehog, transforming growth factor-β and the fibroblast growth factor pathway.

HSPG is a cell surface and extracellular matrix (ECM) macromolecule comprising a core protein linked to a heparan sulfate (HS) glycosaminoglycan (GAG) chain. HSPGs are divided into several families based on their core protein structure (Figure. 1). Glypicans and Syndecans are the two major cell surface HSPGs that are linked to the plasma membrane via glycosylphosphatidylinositol (GPI) junctions or transmembrane domains, respectively. Perlecans are secreted HSPGs that are mainly distributed in ECM. Although Glypicans and Perlecans only carry the HS GAG chain, Syndecans are decorated with HS and chondroitin sulfate (CS). From vertebrate to Drosophila and Caenorhabditis elegans, all three HSPG families are evolutionarily conserved. The Drosophila genome encodes four HSPG homologs: a single Syndecan (Sdc), two Glypicans disruption delay (Dally) and Dally-like protein (Dlp)) and Perlecan extremely reduced optic nerve splint (Trol).

To date, most HSPG studies have demonstrated the importance of their HS chains. The HS chain is a polysaccharide synthesized in the Golgi and contains repeating uronic disaccharide units linked to glucosamine. HS chain biosynthesis begins at the GAG attachment site of the core protein, which contains 2-4 Ser-Gly sequences. as the picture shows. As shown in Figure 2, various glycosyltransferases and modifying enzymes are involved in the polymerization and modification processes of HSPG biosynthesis. These enzymes are conserved in Drosophila and vertebrates. In recent years, some of these enzymes have genetic and biochemical characteristics in Drosophila. 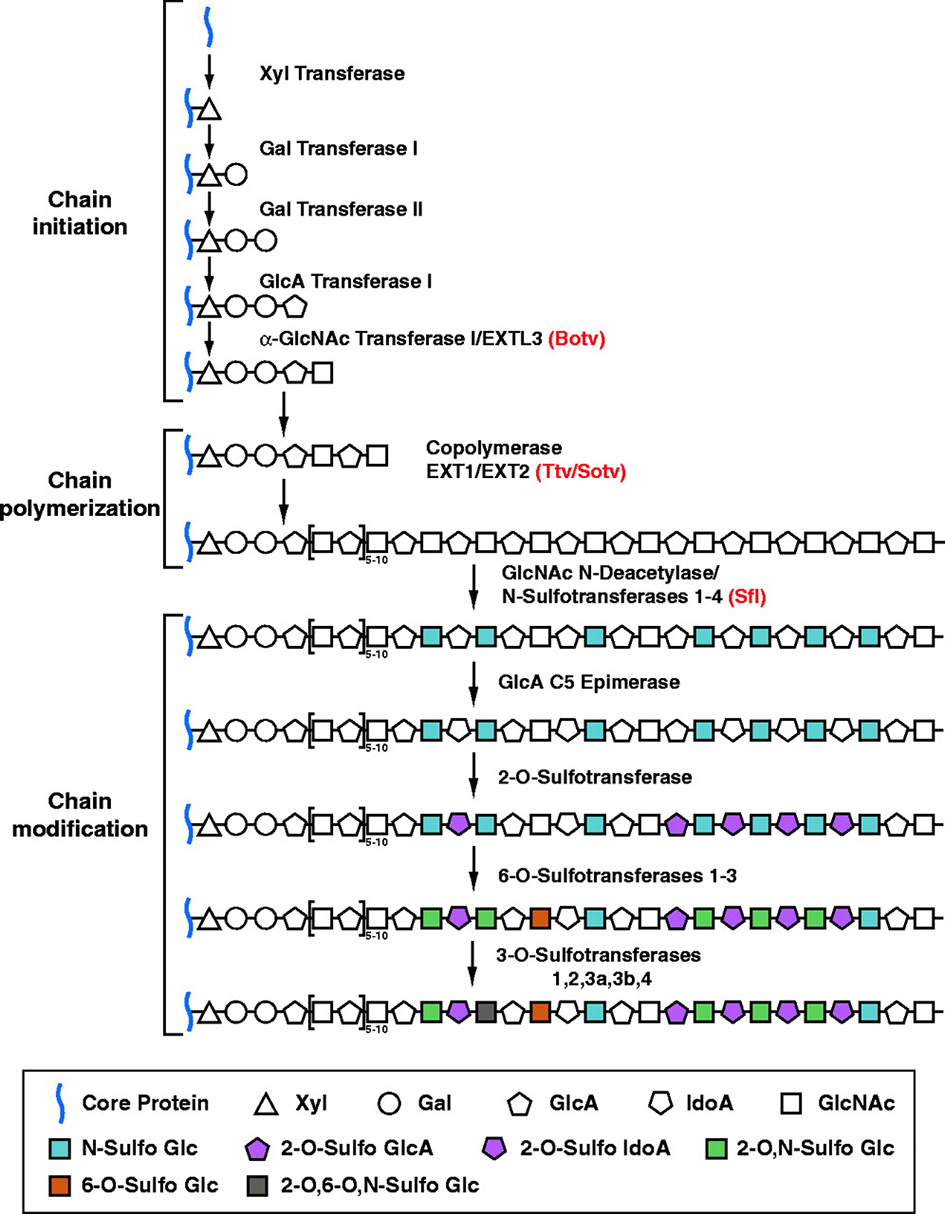 Wnt is a secreted signaling molecule that plays a role in many developmental processes in vertebrates and invertebrates. Through the receptors of the Frizzled (Fz) family, Wnts can transduce their signals through the β-catenin/purine-dependent pathway, termed the "classical" Wnt pathway. Wnt can also transmit their signals via the planar cell polarity (PCP) pathway or the Wnt/Ca2+ pathway (the so-called "non-normative" pathway). Wnt proteins are lipid-modified and bind tightly to the cell surface and EC. Therefore, how Wnt proteins move from cells to cells to initiate intercellular signaling is of particular interest. Drosophila wg encodes a homolog of Wnt1 in vertebrate, and its function is well explored in the patterning of flying embryonic epidermis and larval wing imaging, where Wg acts both as a short-range inducer and as a remote morphogen.

HSPG2 is a 466kDa multi-domain heparan sulfate proteoglycan (HSPG) with a diverse tissue distribution and various biological functions, including cell adhesion, growth factor binding, and modulation of apoptosis. HSPG2 is a molecule that contains two to three GAG side chains at its N-terminus and sometimes one at its C-terminus. Both HSPG2 transcript and protein are highly expressed in cartilaginous regions of developing mouse embryos. Initially, HSPG2 is detected at low levels in precartilaginous areas of embryonic day 12.5. HSPG2 protein accumulates through embryonic day 15.5 a stage at which high levels are detected in cartilage primordia. Elevated levels of HSPG2 transcript at embryonic day 14.5 and decreased to initial levels by embryonic day 15.5 suggesting that HSPG2 may provide a source of HS chains for growth factors (GFs) to bind to during chondrogenesis. It is important to note that HS-bound GFs first must be liberated from the pericellular matrix of cartilage in order to interact with their receptors, and mediate downstream signaling events. Since HPSE has the ability to enzymatically release HS chains, HPSE may be a regulator of efficient growth factor delivery. Numerous studies within the Carson/Farach-Carson laboratory demonstrate the essential role of HSPG2 domain I, decorated with three glycosaminoglycan (GAG) chains, in aggregate formation, early chondrogenesis, and growth factor delivery.

2. Baeg, G. H.; et al. Heparan sulfate proteoglycans are critical for the organization of the extracellular distribution of Wingless. Development. 2001.128,87 -94.