Apoptosis is a normal physiological process by which the body eliminates harmful cells and prevents excessive cell proliferation. The regulation of apoptosis is the key to the body's maintenance of normal cell renewal and proliferation. The occurrence of tumor is often the result of abnormal cell apoptosis leading to excessive cell proliferation. Researchers first discovered that IAP protein is a neuronal apoptotic inhibitor protein (NAIP) from spinal muscular atrophy research in 1995, and then people have successively discovered cell apoptosis inhibitory proteins (cellular IAP, c -IAP l and c-IAP 2), X-linked IAP (XIAP), Survivin, melanoma-IAP, ML-IAP/Livin), testis-specific IAL (Ts-IAP/hILP), and baculoviral IAP repeat containing ubiquitin conjugating enzyme, eight human IAPs family protein members have been found. Inhibitors of apoptotic proteins (IAPs) play a role in blocking apoptosis by inhibiting the activity of enzymes such as Caspase 3, 7, 9 and so on. 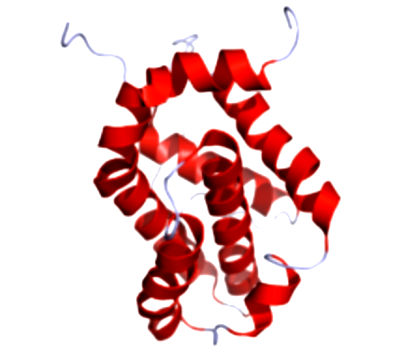 Figure 1. Inhibitor of apoptosis (From Wikipedia)

Apoptosis is a highly regulated programmed cell death. The main executors of apoptosis are a group of aspartic acid-specific cysteine proteases, including two types: initiating Caspase and effector Caspase. Apoptosis occurs mainly through two pathways: the death receptor pathway induced by Fas/caspase8 and the cytochrome C/caspase 9 mitochondrial pathway. Because activated Caspase enzymes can cause serious consequences, Caspase activity is tightly regulated, including two levels of regulation. Among them, the primary regulation of Caspase activation has strict catalytic specificity and high efficiency. Under physiological conditions, Caspase exists in the cytoplasm in the form of zymogens. When cells are stimulated by apoptosis signals, Caspase is activated by an enzymatic cascade to form activated tetramers, which regulates programmed cell death. Caspase secondary regulation is that the intracellular IAP protein rapidly binds to activated Caspase. IAPs proteins directly bind to Caspase's IBM via the BIR domain, inhibiting the catalytic activity of Caspase3/7/9, and blocking the apoptosis process. IAPs proteins regulate the endogenous apoptosis-inhibiting protein family of initiating Caspase and effector Caspase. Among the members of the IAPs family of proteins, the carboxy terminus of five IAP proteins contains a ring domain with E3 ubiquitin ligase activity. c-IAP1 binds to IBM that activates Caspase-3/7 via BIR2, relies on the activity of E3 ubiquitin ligase, and mediates Caspase-3/7 protease via ubiquitin. 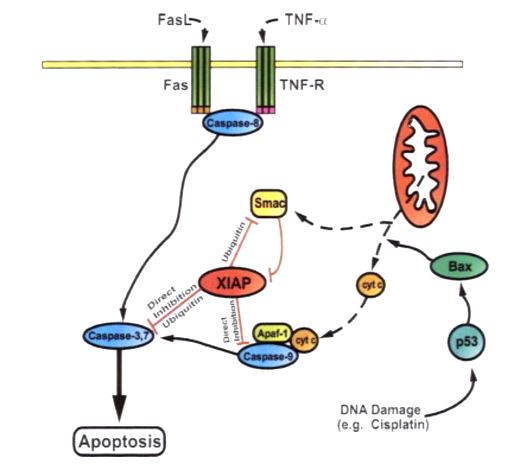 Apoptotic disorders play a very important role in tumorigenesis and development. The abnormal expression of IAPs protein in tumor cells is closely related to the resistance of tumor cells to apoptosis. Apoptotic disorders cause excessive cell proliferation and lead to tumorigenesis and development. The results show that IAPs protein inhibits apoptosis and plays an important role in tumorigenesis, invasion and metastasis. It is possible to improve tumor efficacy by regulating the level of IAP protein. In tumor treatment, most chemotherapeutic drugs activate apoptosis through the mitochondrial pathway. At the same time, dysregulation of tumor cell apoptosis is one of the main reasons leading to resistance to chemotherapeutic drugs, and apoptosis inhibitory proteins IAPs play an important role in inhibiting apoptosis. IAP family protein expression levels are associated with drug resistance in lung, pancreatic, and renal cancers. Although tumor chemotherapy resistance is a complex process involving multiple genes. These studies show that IAPs family proteins not only play an important role in the regulation of apoptosis, but also have a close relationship with the drug resistance of tumor cells. Due to the important role of IAP family proteins in apoptosis, IAPs family proteins are highly expressed in tumor tissue cells. In view of the fact that IAP protein molecules are the target of tumor therapy, how to effectively improve the sensitivity of tumor cells to apoptosis has become a focus of tumor targeted therapy research. People are using RNA interference, antisense nucleic acid, ribozyme, gene therapy and other technologies to inhibit the expression of IAP protein in tumor cells. By targeting single genes, they have effectively promoted the decay of tumor cells, and research has been conducted to increase the sensitivity to radiation therapy and chemotherapy. 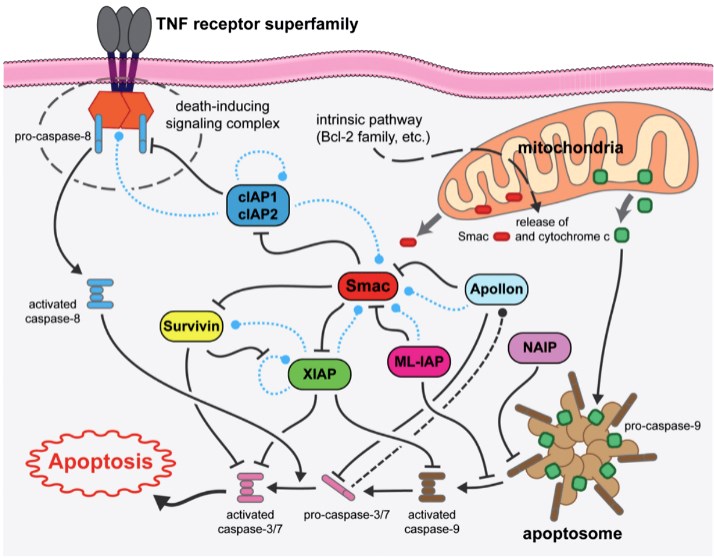 Ubiquitination is one of the major post-translational protein modifications found in eukaryotic cells. In addition to effective control of protein degradation and turnover, ubiquitination can modify the enzymatic activity of many important cellular regulators and alter the cellular localization of substrate proteins. Ubiquitination involves the covalent attachment of a 76 amino acid protein ubiquitin to the lysine of the target protein. This process is performed by E1 ubiquitin activating enzyme, E2 ubiquitin conjugating enzyme and E3 ubiquitin ligase, where E3 enzyme provides substrate specificity. There are two E1, about 50 E2 and more than 600 E3. Two types of RING E3 ligase can be found: one forms a multiprotein complex with a substrate binding protein, and the E2 binding and substrate binding domains are encoded by the same polypeptide [60]. IAP proteins fall into the latter category because they primarily use their BIR domain for substrate binding, and RING for interaction with the E2 enzyme. Ubiquitin may cause the transfer of a single ubiquitin molecule to the assembly of the target protein-monoubiquitin or polyubiquitin chain. Since ubiquitin has 7 lysines and one N-terminal methionine, there may be 8 different ubiquitin chains: linear (through the N-terminal), K6, K11, K27, K29, K33, K48, K63, this is the most common research is the best K48 and K63 chains. In most cases, the K48 chain of more than four ubiquitin labels proteins degraded by the 26S proteasome, and the chain connected to K63 can provide signals for changes in functional activity or cell distribution. c-IAP protein can promote the assembly of various ubiquitin chains on its substrate and itself. The most well-known substrates for c-IAP protein E3 ligase activity are RIP1 and NIK. c-IAP1 / 2-mediated ubiquitination of RIP1 is a key signal required to activate the typical NF-κB signaling pathway. In the non-classical NF-κB pathway, c-IAP1 and c-IAP2 promote the polyubiquitination of K48-linked NIKs, thereby blocking non-classical NF-κB activity. In addition to RIP1 and NIK, c-IAP1 and c-IAP2 promote the ubiquitination of a variety of signaling molecules including TRAF2, TRAF3, Ask and Smac, which may directly affect cell survival. XIAP ubiquitination activity does not seem to be necessary for its anti-apoptotic activity, but it can still affect caspase stability and cell survival. 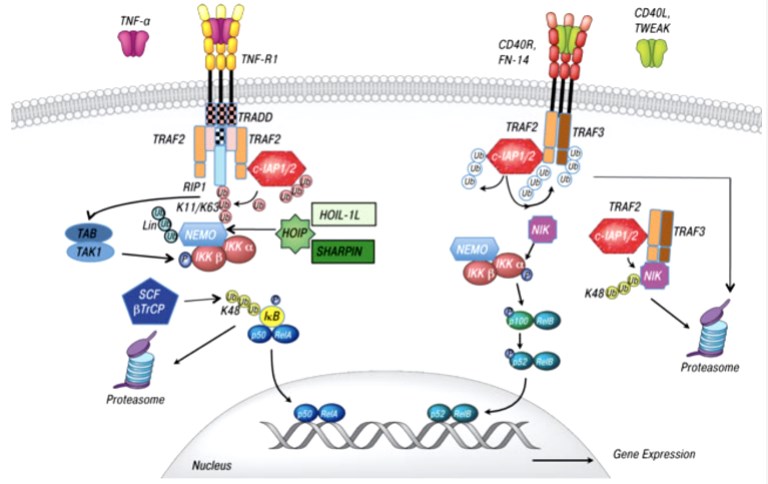 Studies from multiple groups have shown that the single-agent proapoptotic activity of Imac antagonists mimicking Smac is caused by c-IAP1 / 2 antagonistic effects and TNFα-dependent cell death. Treatment with IAP antagonists results in c-IAP1 and c-IAP2 degradation within minutes. For a long time, the knowledge of this rapidly lost c-IAP protein has not been known. However, recent biochemical and structural studies have solved this mystery and provided molecular explanations. Binding of IAP antagonists to c-IAP1 causes conformational changes, opening the c-IAP1 structure and allowing the c-IAP RING domain to dimerize. RING-mediated dimerization activates c-IAP1 / 2 E3 ligase activity, resulting in autologous ubiquitination and subsequent proteasome degradation.