The cyclin-dependent kinase inhibitors (CKIs) include two distinct families. One is the CIP/KIP family, whose three members (p21CIP1/WAF1, p27KIP1, p57KIP2) are able to inhibit the activity of all CDKs. Another is the inhibitors of CDK4 (INK4) family, which includes four members, p16INK4a, p15INK4b, p18INK4c, and p19INK4d, and can exclusively bind to and inhibit the D-type cyclin-dependent kinases (CDK4 and CDK6). INK4 proteins share a similar structure dominated by several ankyrin repeats, and have cell lineage-specific or tissue-specific functions due to the expression pattern of INK4 genes. INK4 proteins have the capacity to arrest cells in the G1-phase of the cell cycle and participate in an increasing number of cellular processes. The INK4 proteins are commonly lost or inactivated by mutations in diverse types of cancer, and they represent established or candidate tumor suppressors. 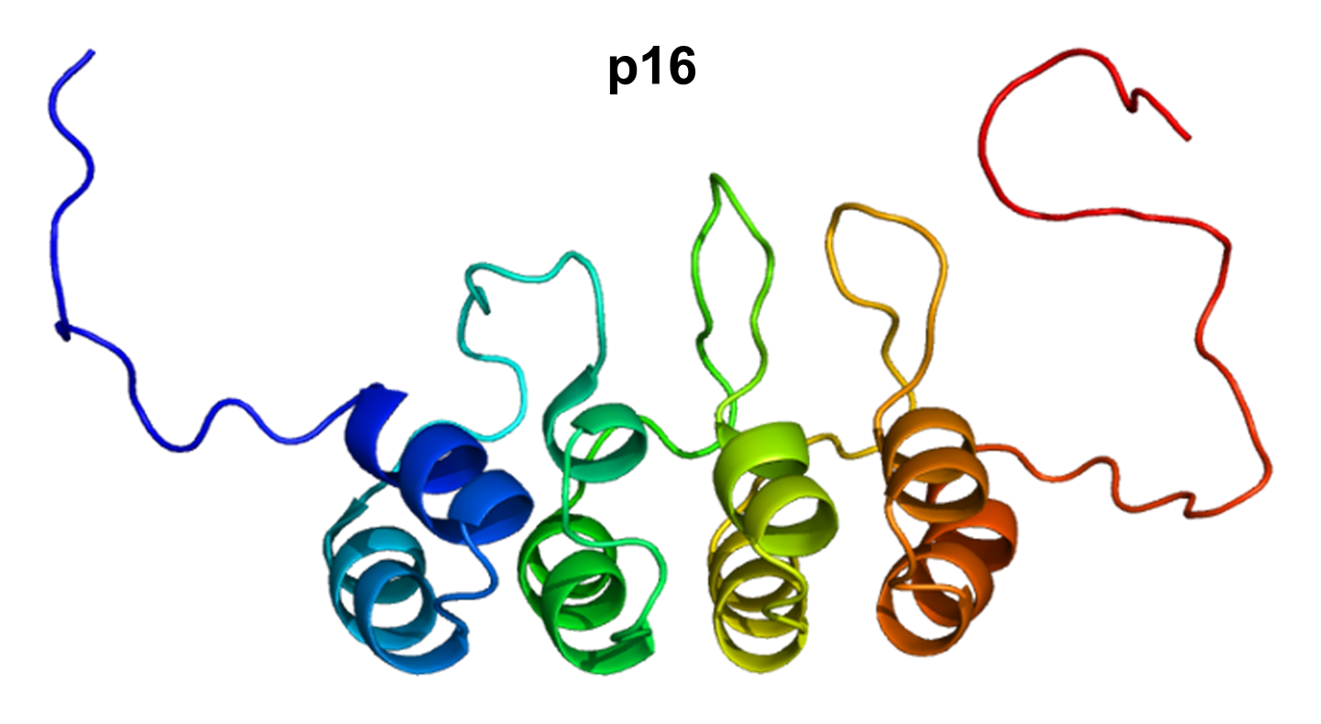 The p16 protein was first discovered in a study that was targeted at identifying differences in the cell cycle regulators of normal and transformed cells. It slows down the cell cycle by prohibiting progression from G1 phase to S phase. The p16 gene encodes a polypeptide of 156 amino acids in humans. The most striking feature of the p16 sequence is that it is composed almost entirely of four ankyrin repeat units, suggesting that the protein might be folded from helix-β-turn-helix motifs. p16 proteins bind specifically to CDK4 and CDK6 with a 1:1 stoichiometry. The result of this binding is loss of CDK4 kinase activity toward its physiological substrate, Rb. p16 binds CDK4 and CDK6 in the absence of cyclin D, and purified p16 protein can promote dissociation of the CDK4-cyclin D1 complex.

As an inhibitor of CDK4, p16 is also a growth suppressor, and the key target of CDK4, Rb, is a tumor suppressor in its own right. Thus, p16 is a negative regulator of a protein that functions to inactivate a tumor/growth suppressor in proliferating cells. The p16 gene is altered in a high percentage of human tumors of many different varieties. p16 can be inactivated by a variety of mechanisms including deletion, point mutation, and silencing by methylation. The generation of p16-null mice have confirmed that p16 is a tumor suppressor. Deletions of INK4a/ARF are frequent in children with acute lymphoblastic leukemia.

The gene encoding p15 was first noted by KAMB et al. during their cytogenetically-based cloning of p16. p15 and p16 share a high degree of identity in their C-terminal segments, while the N-terminal portions of these proteins are much more diverged. However, the four-ankyrin repeat structure that is characteristic of the INK4 family is maintained. p15 and p16 are biochemically indistinguishable in vitro. Both bind to and inhibit CDK4 and CDK6 kinases with similar affinities. The genes encoding these proteins are closely linked on chromosome 9 at p21, suggesting that these homologs arose from a gene duplication event.

The gene expression of p15 was found to be induced by TGF-β, which suggested its role in the TGF-β induced growth inhibition. p15 can form a complex with CDK4 or CDK6, and prevents the activation of the CDK kinases by cyclin D, thus the protein functions as a cell growth regulator that inhibits cell cycle G1 progression.

The p18 and p19 genes were first noted in yeast two-hybrid screens that were designed to search for proteins that interact with CDK4 or CDK6. p18 and p19 are approximately 40% identical and have similar degrees of protein homology with p16 and p15. As is characteristic of the INK4 family, p18 and p19 are composed of four tandem ankyrin motifs, each about 32 amino acids in length.

p18 and p19 specifically bind to the cyclin D-dependent catalytic subunits, CDK4 and CDK6, and are unable to interact with other CDKs or directly with D-cyclins. In contrast with other members of the INK4, p18 and p19 do not displace cyclin D from CDK4 and CDK6. In vitro reconstitution of the complexes demonstrates that recombinant p18 and p19 proteins can bind to CDK4-cyclin D complexes without displacing the cyclin. However, p18 or p19 do not co-immunoprecipitate with cyclin D in vivo. This suggests that p18 and p19 also prevent the binding of cyclin D to the catalytic subunit in vivo.

As with p15 and p16, the result of p18 or p19 binding to CDKs or CDK cyclin D complexes is the inhibition of CDK. However, none of these proteins inhibit the pRb kinase activity of cyclin E-CDK2 complexes. Despite evidence of inhibition of CDK4/6 by cyclin D displacement, another mechanism for the inhibition of CDKs by p18 has also been proposed. p18 can efficiently block CDK6 phosphorylation by CAK but has no effect on the phosphorylation and activation of CDK2. Since p18 can not bind directly to CDK7 or cyclin H (CAK subunits), it has been suggested that p18 blocks CDK6 activation by rendering this protein inaccessible to CAK.

It has been just over a decade since the discovery of the INK4 family of CDK inhibitors. The extensive studies during these last few years have contributed significantly to our current understanding of mammalian G1 control at the cellular and biochemical levels. Recent evidence support that in addition to their role as cell cycle regulators, the individual INK4 family members would perform diverse and distinct cellular tasks. Inevitably, various cellular pathways, such as cell growth, differentiation, senescence, DNA repair, apoptosis and various checkpoint controls, must interact with the pathways that regulate the progression through the G1 phase of the cell cycle.