What is Ion Channel Protein?

Ion channels are pore-forming multimeric proteins on membrane that allow ions to pass through the channel pore, either plasma membranes or the membranes of intracellular organelles. These proteins arrange themselves to form a passageway or pore extending from one side of the membrane to the other. Excitable cells, which have the ability to generate electrical signals, including neurons, muscle cells, and touch receptor cells, convert chemical or mechanical messages into electrical signals using ion channel receptors. Some ion channels (most Na+, K+ Ca2+ and some Cl- channels) are gated by voltage and other ion channels (certain K+ and Cl- channels, TRP channels, ryanodine receptors and IP3 receptors) are voltage-insensitive and are gated by second messengers and other intracellular or extracellular mediators. Ion channels are expressed in many cancers and contribute to disease progression. A number of ion channels are well established as clinical targets for a range of (noncancer) pathologies.

Bacterial K+ channel protein is usually chosen for analysis because the channel proteins needed for crystallography could be obtained by growing a great number of bacteria. Potassium (K+) channels are located in cell membranes and control transportation of K+ ions efflux from and influx into cells. They play essential roles in both excitable and non-excitable cells and can be found in almost all species, except for some parasites. The channel is formed by several subunits. Each subunit crosses the plasma membrane twice.  A loop that inserts into the plasma membrane exists between these two membrane-spanning structures (Figure 1A). Four of these subunits are assembled together and the channel formed (Figure 1B). In the center of the assembled channel is a narrow opening through the protein that allows K+ to flow across the membrane.

Figure 1. Structure of K+ channel. (A) Structure of one subunit of the channel, which composed of two membrane-spanning domains and a pore loop that inserts into the membrane. (B) Three-dimensional arrangement of four subunits (in four different colors) to form a K+ channel. The top view illustrates a K+ ion (green) in the channel pore.

In the center of the assembled channel is a narrow opening through the protein that allows K+ to flow across the membrane. The pore, also called tunnel, is formed by the protein loop, as well as by the membrane-spanning domains. The structure of the pore is suitable for shultling K+ ions (Figure 2). The narrowest part is near the outside mouth of the channel and only a nonhydrated K+ can fit through this bottleneck. 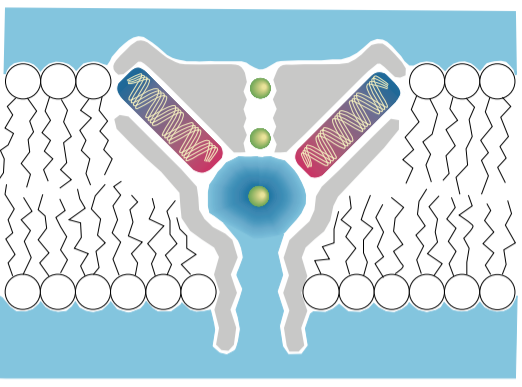 Figure 2. The permeation pathway of the K+ channel. The channel consists of a large aqueous cavity connected to a narrow selectivity filter. Helical domains of the channel point negative charges toward this cavity, allowing K+ ions to become dehydrated and then move through the selectivity filter.

The opening of ion channels changes the charge distribution on the plasma membrane. The composition of ion in the cytoplasm is different from the extracellular environment. For example, the concentration of sodium ions in the cytoplasm is lower than outside. On the contrary, concentration of potassium ions in a cell is higher than outside. The differences create an electrochemical gradient (a combination of a chemical gradient and a charge gradient). The opening of ion channels allows the ions to flow down this dual gradient on both side of the plasma membrane. The direction of flow is determined by the ion type, the concentration difference and the voltage difference. This ion flow generates an electrical signal. Very small number of ions can change the voltage across the membrane. During the short times when an ion channel is open, the concentration of a particular ion in the cytoplasm does not change significantly over all, the concentration changes only in the immediate vicinity of the channel. Because of the opening of other ion channels that are sensitive to the voltage change caused by the initial channel opening. Therefore, the electrical signal initiated by ion channel receptor activity moves rapidly over the surface of the excitable cell.

Interaction of Ion Channels with the Cytoskeleton

The physiological activity of many types of cells depend on their ability to organize integral membrane proteins (particularly ion channels) into functionally specialized domains of the plasma membrane. This organization is the base of a wide range of cellular functions including the propagation and integration of electrical signals in the nervous and muscular system by excitable membranes. The mechanism of ion channels being organized into these membrane domains (Figure 3) reflects an interaction between the ion channel and the cellular cytoskeleton. 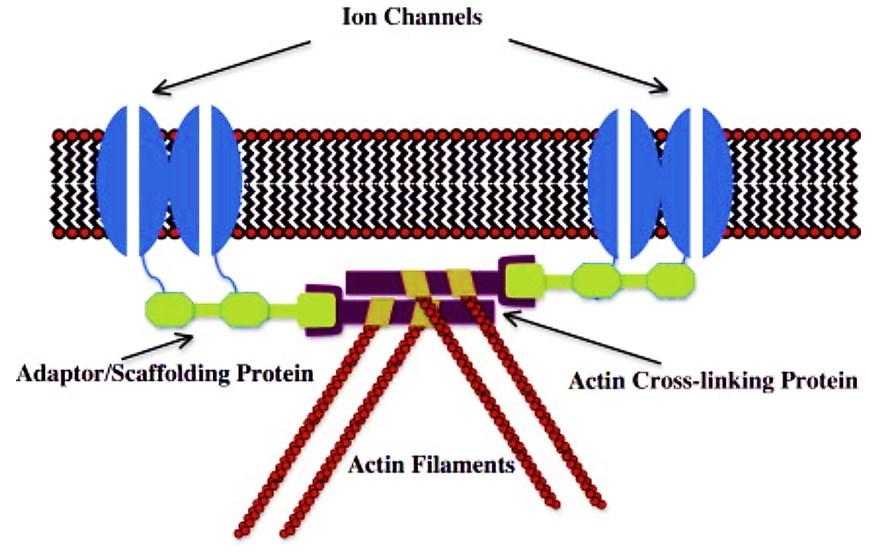