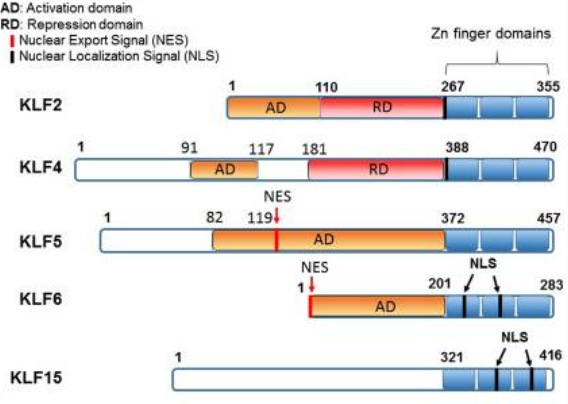 KLF4 is expressed in podocytes and is a critical regulator of proteinuria. In proteinuric animals and humans, decreased KLF4 expression contributes to proteinuria. Gene transfer by tail vein injections or podocyte-specific transgenic restoration of KLF4 in diseased glomeruli, induced recovery of podocyte epithelial marker nephrin with a concurrent decrease in albuminuria. Moreover, adriamycin-induced proteinuria was found to be significantly exacerbated in podocyte-specific KLF4 KO mice. The mechanism by which KLF4 regulated expression of nephrin gene and other epithelial and mesenchymal genes was shown to involve epigenetic modification of promoters of these genes.

Various KLF proteins regulate different aspects of kidney disease. Specific KLF proteins could serve as therapeutic targets and agents that increase or decrease expression and/or function of specific KLF proteins, could serve as drugs to ameliorate kidney injury and/or slow down or halt progression to fibrosis and CKD. Epigenetic modifications of genes play a critical role in renal fibrosis and CKD. In the future epigenetic modification drugs that induce KLF4 expression could serve as good candidate for treatment of CKD. KLF4 and KLF6 expression is decreased in renal cell carcinoma, there by promoting cellular proliferation and metastasis.

In addition to cells of the vessels themselves, circulating immune cells and their infiltration into the vascular wall are paramount to the initiation and propagation of vascular inflammation. There is ample research implicating both innate and adaptive immune cells in the progression of atherosclerosis. Comparable with their role in vascular cells, KLFs have divergent functions in myeloid cell-derived inflammation, capable of either repressing or promoting inflammatory processes. 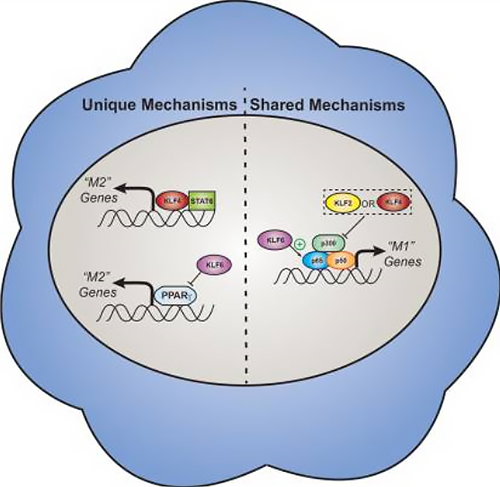 In addition to regulating differentiation, activation, and polarization of monocytes, KLFs also shape lymphocyte and DC function. While there is a paucity of studies investigating KLF-driven lymphocyte processes in vascular inflammation, there is extensive evidence demonstrating the importance of KLFs in lymphocyte biology that can be extrapolated to the context of vascular disease.

Current therapies for atherosclerosis largely target mechanisms known to activate vascular inflammatory cascades such as dyslipidemia (statins), disturbed flow (anti-hypertensives), and activated circulating inflammatory cells (aspirin). Given the importance of these stimuli in the pathogenesis of atherosclerosis and thrombosis, understanding molecular mediators of vascular inflammation is imperative in developing novel agents against cardiovascular disease. While accomplishing specificity in targeting KLFs will likely be difficult, multiple compounds act upstream of KLFs, thereby modulating their expression and function.