There is a kind of safety guarantee system in human cells that can repair DNA base mismatch, called DNA mis-match repair (MMR) system, to maintain the integrity and stability of genetic material and avoid genetic mutation. The production has an important role, the main MMR genes are hMSH1-6 and hMLH1-5.

The process of mismatch repair requires the distinction between the parent and daughter strands, so that only the wrong nucleotides on the daughter strand are cleaved, and the nucleotides that are normally normal on the parent strand are not removed. Mismatch repair belongs to DNA repair and is repaired when copied. The process of repair is mainly to identify the correct strand, cut off the incorrect part, and then synthesize the correctly paired double-stranded DNA by the action of DNA polymerase III and DNA ligase.

Mismatch repair system begins to correct the DNA duplex just replicated during the replication process. During DNA replication, the N6 position of A in the GATC sequence of the template strand is methylated, while the newly synthesized strand has a methylation gradient with minimal methylation near the replication fork. Therefore, the newly synthesized DNA double-stranded molecule is in a half-methylated state, and the mismatch repair system is utilizing this principle, with the base position template of the template strand, and the mismatched nucleotide of the exon strand.

Mismatch repair in prokaryotes and eukaryotes

Mismatch repair system of prokaryotes such as E. coli is the Mut S, Mut H and Mut L proteins encoded by the Mut gene, in which Mut S and Mut L, each protein is repeated once to form a tetrameric Mut SL, which slides on the DNA. If you encounter a bulge caused by a base pair mismatch, you will stop and start pulling the DNA double strands on both sides to form a loop until the GATC sequence is recognized. If the N6 of A is methylated, it is a parent chain. Excision, and if GATC A is not methylated, it is a sub-chain, Mut H will be bound to Mut SL. Mut H has endonuclease activity, which is cleaved at the 5' end of the GATC sequence, that is, to the left of G, and then exonuclease activity is carried out by DNase I. The loop of the Mut SL tetramer is completely excised, and then the DNA is removed. POL III and DNA ligase were refilled.

Mismatch repair is a study of many genes from S. pneumoniae (hexA and hexB genes) and E. coli. These genes, when inactivated by mutations, result in highly variant strains whose gene products are called "mutant" proteins. Three of these proteins are critical for detecting mismatch and repair mechanisms: MutS, MutH and MutL (MutS is a homolog of HexA and MutL of HexB). 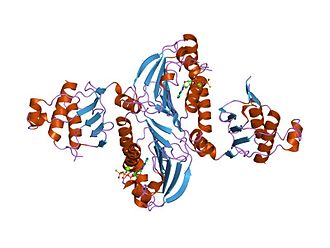 MutS is a modular protein with a complex structure consisting of an N-terminal mismatch recognition domain, a linker domain, and a core domain. MutS homologue has weak ATPase activity and forms lead ATP bonds on the surface of molecules of tertiary structure. In eukaryotes, MutS homologs form two major heterodimers: Msh2/Msh6 (MutSα) and Msh2 / Msh3 (MutSβ). The MutSα pathway is mainly involved in base substitution and small loop mismatch repair, and MutSβ cannot repair base substitution. 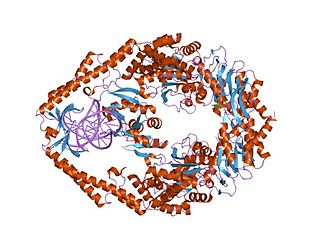 Figure 2. The crystal structure of E. coli MutS binding to DNA with an a:a mismatch.

MutL also has a weak ATPase activity (it uses ATP for exercise purposes). It forms a complex with MutS and MutH, increasing the footprint of MutS on DNA. However, UvrD's continuous synthesis capability is low, and with the help of MutL, the speed of UvrD loading is greatly improved. Although the synthesis capacity (and ATP utilization) of each UvrD molecule remains unchanged, the overall effect on DNA is greatly enhanced. DNA did not have the opportunity to reanneal because each UvrD untwisted 40-50 bp of DNA, dissociated, and was immediately replaced by another UvrD, repeating the process. This exposes large areas of DNA to exonuclease digestion, allowing rapid removal (and subsequent replacement) of incorrect DNA.

DNA mismatch can affect genomic stability and is associated with certain human cancers. Specifically, hereditary non-polyposis colorectal cancer is classified as a tumor suppressor gene due to the harmful germline variation in the genes encoding the MutS and MutL analogs MSH2 and MLH1, respectively.