Mitochondrion is a two-layer membrane organelle that exists in most cells. It is the structure that makes energy in cells. It is the main place for cells to perform aerobic respiration. It is called "power house". Its diameter is around 0.5 to 1.0 microns. Except for E. histolytica, Giardia lamblia and several microsporidia, most eukaryotic cells have mitochondria more or less, but their respective mitochondria are in size, quantity and appearance. It's all different. Mitochondria have its own genetic material and genetic system, but its genome size is limited and it is a semi-autonomous organelle. In addition to energizing cells, mitochondria are involved in processes such as cell differentiation, cell signaling, and apoptosis, and have the ability to regulate cell growth and cell cycle.

Figure 1. Number 9 in the figure is mitochondria.

The direction of mitochondria distribution is consistent with that of microtubules, usually distributed in areas with strong cell functions: in the kidney cells, close to the microvessels, arranged in parallel or grid; in the epithelial cells of the intestinal epithelium, it is distributed in the poles and concentrated in the apex and base; Distributed in the middle of the flagella. In the in vitro culture of oocytes, as the cells mature, the mitochondria will develop into a uniform distribution from the periphery of the cells. Mitochondria can move from microtubules in the cytoplasm and are powered by motor proteins to migrate to functional areas. 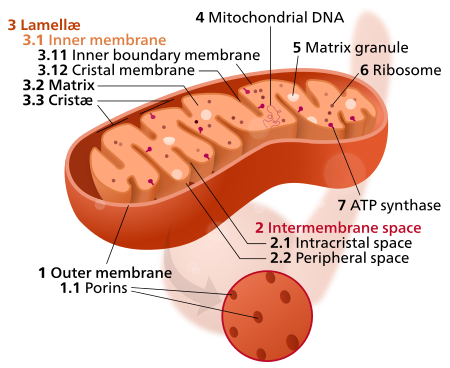 Mitochondria are the sites of oxidative metabolism of eukaryotes, and are the sites where sugars, fats, and amino acids ultimately oxidize to release energy. The common pathway responsible for the ultimate oxidation of mitochondria is the tricarboxylic acid cycle and oxidative phosphorylation, corresponding to the second and third phases of aerobic respiration, respectively. Complete glycolysis in the cytoplasmic matrix and the completed tricarboxylic acid cycle in the mitochondrial matrix produce reduced nicotinarnide adenine dinucleotide (NADH) and reduced flavin adenine dinucleoside High-energy molecules such as reduced flavin adenosine dinucleotide (FADH2), and the step of oxidative phosphorylation is the use of these substances to reduce oxygen release energy to synthesize ATP. During aerobic respiration, one molecule of glucose releases 30-32 molecules of ATP after glycolysis, tricarboxylic acid cycle, and oxidative phosphorylation (considering that it may take 2 molecules of ATP to transport NADH into mitochondria). If the cell is in an oxygen-deficient environment, it will turn to anaerobic respiration. At this time, the pyruvic acid produced by glycolysis no longer enters the carboxylic acid cycle in the mitochondria, but continues to react in the cytoplasmic matrix (reduced by NADH into a fermentation product such as ethanol or lactic acid), but does not produce ATP. Therefore, in the process of anaerobic respiration, 1 molecule of glucose can only produce 2 molecules of ATP in the first stage.