Members of the kinetic family of median mitochondrial division and fusion 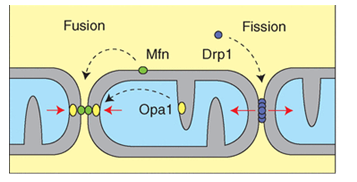 The Drp1 homologs have a domain structure that is characteristic of the Dynamin family (Figure. 2). Each one has a GTPase domain followed by a middle domain, a variable domain, and a GTPase effector domain (GED). The variable domain, also referred to as insert B, is generally required for binding to the target membrane. In the fission Dynamins, this domain binds to adaptor proteins on the mitochondrial surface. The lipid-binding domain in the fusion proteins, Mgm1 and Opa1, is specific for cardiolipin, whereas the outer membrane fusion proteins, Fzo1 and Mitofusins, each have two trans-membrane segments that serve as membrane anchors.

Regulation of mitochondrial fission through phosphorylation and ubiquitination

Other effects of fusion Mitophagy proteins

The phenotypic effects of mutations in the mitochondrial inner and outer membrane fusion proteins are significantly different. Yeasts Fzo1 and Mgm1 noticed this, with Mgm1 appearing to have other functions in helping to preserve mtDNA and ista morphology. Mutations in similar C. elegans and Drosophila proteins have also noted differences in viability and tissue-specific effects. Although homozygous mutations in mice are fatal, there are differences in the most affected stages and in heterozygous animals. Humans with pathogenic mutations in mitochondrial fusion proteins or Opa1 are usually heterozygous, but the diseases caused by these mutations are different: Opa1 mutations cause optic nerve atrophy through the gradual loss of retinal ganglion cells, while Mfn2 mutations cause Forms of peripheral neuropathy.