What is Nuclear Hormone Receptor Proteins？

Nuclear hormone receptor proteins refer to a class of ligand-activating proteins. When they bind to specific sequences of DNA, they become transcription switches in the nucleus of the cell. These switches control the development and differentiation of skin, bone, and behavioral centers in the brain, as well as regulating reproductive tissue. Nuclear hormone receptors are ligand-activated transcription factors, which are trans-acting factors that regulate gene expression by interacting with specific DNA sequences upstream of the target gene. It works through a two-step mechanism. The first step is activation, which is achieved through hormone binding; the second step is receptor binding to DNA and transcriptional regulation. 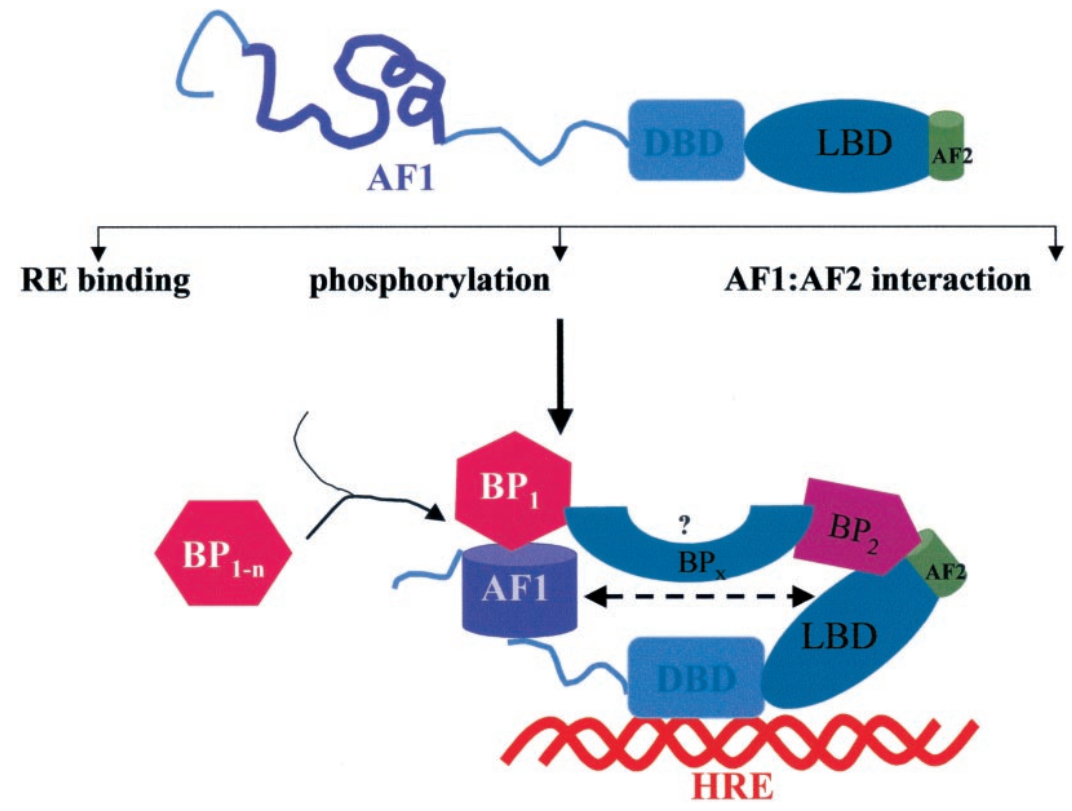 Nuclear hormone receptor protein is composed of multiple domains. These domains are conserved and have different roles in different receptors. Including variable N-terminal region, conserved DNA binding domain (DBD), A variable hinge region (shows little homology within the nuclear receptor superfamily, has no known function), a conserved ligand binding domain (LBD), and a variable C-terminal region (has no known function). The general regulation process of NHR is shown in Fig. 1. However, NHRs may be tethered to DNA sites by way of other transcription factors, it is possible that additional configurational changes in the NTD AFs could be occurring by way of those connections (Fig. 2).

Figure 2. Regulation of NHR through other transcription factors (TFS)

The N-terminal domains (NTDs) have strong transcription-activating functions (AFs). Recombinant NTD-AFs can be folded by applying certain osmotic cells or by binding DNA binding regions to DNA response elements. The sequence of the DNA binding site may affect the functional status of the AFs domain. If properly folded, NTD-AFs can bind certain cofactors and primary transcription factors. Through these and / or direct interactions, NTD-AFs can interact with ligand binding of the NHRs, and interact with the AF2 domain in the carboxy-terminal portion.

Central DBD plays a role in localizing the receptor to its hormone response element (HRE). The DNA-binding domain is a type II zinc finger motif and includes two subdomains, each containing a zinc ion, coordinated by four cysteine ​​residues, and then an alpha helix. DBD binds as a dimer to each monomer that recognizes a six base pair sequence of DNA. The read helix of each monomer makes sequence-specific contacts in the main DNA groove at each half-site. These allow the dimer to distinguish the sequence by reading the sequence, spacing, and orientation of the half-sites within its response element. These proteins show flexibility in recognizing DNA sequences and can also be replaced by various amino acids in their reading helix without affecting binding.

LBD is involved in a variety of activities including hormone binding, formation of homodimers and heterodimers, formation of heat shock protein complexes, and transcriptional activation and suppression. The combination of hormones causes conformational changes that control these properties and affect gene expression. The conformational changes that accompany the transition between linked and unlinked forms of nuclear hormone receptors greatly affect their affinity for other proteins.