Nuclear transport refers to the mechanism by which molecules move across the nuclear membrane of a cell. The entry and exit of macromolecules from the nucleus is strictly controlled by the nuclear pore complex (NPC). Although small molecules can enter the nucleus unregulated, large molecules (such as RNA and proteins) still need to bind to transport factors called nuclear transport receptors, such as a nuclear transporter called importin that enters the nucleus, and exportin exits. Proteins that must be introduced into the nucleus from the cytoplasm carry nuclear localization signals (NLS) bound by importins. NLS is an amino acid sequence that acts as a tag. Their composition varies, and the most common is hydrophilic, although there are reports of hydrophobic sequences in the literature. Proteins, transfer RNAs, and assembled ribosomal subunits are exported from the nucleus by binding to export proteins, which bind to a signal sequence called the nuclear export signal (NES). The ability of imported and exported proteins to transport cargo is regulated by Ras-related small GTPase Ran. GTPases are an enzyme that binds to a molecule called guanosine triphosphate (GTP), which then hydrolyzes to produce guanine diphosphate (GDP) and releases energy. Ran's configuration is different depending on whether it is tied to GTP or GDP. In its GTP-bound state, Ran is able to bind nuclear proteins (importins and exportins). Importins release goods after combining with RanGTP, and Exportins must combine with RanGTP to form a ternary complex with its export goods. Ran's major nucleotide binding status depends on whether it is located in the nucleus (RanGTP) or cytoplasm (RanGDP). 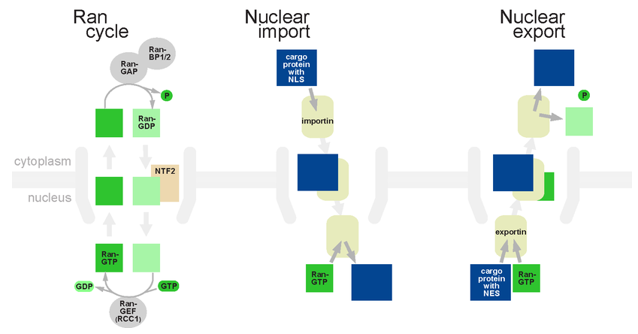 Figure 1. Macromolecules are actively transported across the nuclear membrane during the Ran-GTP nuclear transport cycle.

Importin proteins bind their cargo in the cytoplasm, and they are then able to interact with and pass through the nuclear pore complex. Once inside the nucleus, the interaction with Ran-GTP causes a conformational change in the importin, which separates it from the cargo. As a result, the complex of importin and Ran-GTP is transported to the cytoplasm, where a protein called Ran-binding protein (RanBP) separates Ran-GTP from importin. Isolation allows access to GTPase activating protein (GAP) that binds Ran-GTP and induces the hydrolysis of GTP to GDP. Now, the Ran-GDP generated by this process is combined with the nuclear transport factor NUTF2, which returns it to the cytoplasm. Now in the nucleus, Ran-GDP interacts with the guanine nucleotide exchange factor (GEF), which replaces GDP with GTP, thereby generating Ran-GTP again and restarting the cycle.

The nuclear exit roughly reverses the import process; in the nucleus, the export protein binds to the cargo and Ran-GTP and diffuses through the pores into the cytoplasm where the complex dissociates. Ran-GTP binds GAP and hydrolyzes GTP, and the resulting Ran-GDP complex is reduced to the nucleus, where it exchanges its bound ligand for GTP. Therefore, although imported proteins rely on RanGTP to separate from cargo, export proteins require RanGTP to bind to their cargo. After post-transcriptional modification is complete, specialized mRNA export proteins move mature mRNA to the cytoplasm. Although the specific mechanism is not fully understood, the translocation process is actively dependent on the Ran protein. Some particularly commonly transcribed genes are physically located near the nuclear pore to facilitate the transport process. The output of tRNA also depends on the various modifications it undergoes, thus preventing the output of tRNAs that are not functioning properly. Since tRNA plays an important role in translation, this quality control mechanism is important because tRNA involves adding amino acids to a growing peptide chain. The tRNA exporter in vertebrates is called exportin-t. Exportin-t binds directly to the tRNA cargo in its nucleus, which is facilitated by the presence of RanGTP. Mutations affecting the structure of tRNA will inhibit its ability to bind exportin-t, thereby inhibiting its binding to export proteins, thus providing another quality control step for cells. As mentioned above, once the complex crosses the envelope, it dissociates and releases the tRNA cargo into the cytoplasm.