Cyclins Proteins is a synchronous and periodic concentration of protein, which is first isolated from sea urchin embryos. It is a large family of relative molecular mass of 50,000 proteins, including: periodic proteins A, B, D, E, G and H. They bind to key protein kinases (cyclin-dependent kinases, CDKs) and regulate their enzymatic activity, helping to advance and coordinate the cell cycle. We can artificially divide the cell cycle into several periods. At the beginning, people divide the cells into two phases according to the morphological changes of the cells. The Howard theory divides the cell cycle by the replication and division of the nuclear material DNA as the main boundary—that is, according to time. The sequence determines the cell cycle as four phases: pre-DNA synthesis (G1 phase), DNA synthesis phase (S phase), late DNA synthesis (G2 phase), and cleavage phase (M phase). Throughout the cell cycle, the morphological changes of cells are consistent with various biochemical and physiological cycle changes in cells, but the cell lengths of different cells are inconsistent, ranging from a few hours to a few hours, and a long time of several decades. This is mainly determined by the G1 period. 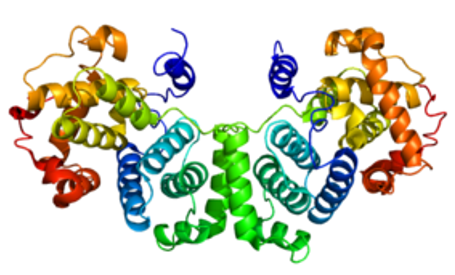 Figure 1. Structure of Cyclin B.

Cyclin B is required for cells to enter and exit the M phase of the cell cycle. At the end of S phase, the phosphatase cdc25c dephosphorylates tyrosine 15 to activate the cyclin B/CDK1 complex. Upon activation, the complex is shuttled to the nucleus to trigger entry into mitosis. However, if DNA damage is detected, other proteins are activated, which leads to inhibition of phosphorylation of cdc25c and therefore does not activate cyclinB/CDK1. In order to detach cells from mitosis, degradation of cyclin B is necessary. The cyclin B/CDK1 complex also interacts with a variety of other key proteins and pathways that regulate cell growth and mitosis processes. Crosstalk between many of these pathways indirectly links the level of cyclin B to the induction of apoptosis. The cyclin B/CDK1 complex plays a key role in the expression of survival signal survivin. Survivin is essential for the correct creation of the mitotic spindle, and the mitotic spindle can severely affect cell viability, so when cyclin B levels are disrupted, cells will be difficult to polarize. Decreased levels of survivin and related mitotic disorders trigger apoptosis through a caspase 3 mediated pathway.

Cyclin-C is a protein encoded by the CCNC gene in humans, and the protein encoded by this gene is a member of the cyclin protein family. The encoded protein interacts with cyclin-dependent kinase 8 and induces phosphorylation of the carboxy-terminal domain of the RNA polymerase II large subunit. The mRNA level of this gene peaks in the G1 phase of the cell cycle. Two transcript variants encoding different isoforms of this gene have been found.

Cyclin F is a protein that in humans is encoded by the CCNF gene. This gene encodes a member of the cyclin family. Cyclin is an important regulator of cell cycle transition through its ability to bind and activate cyclin-dependent protein kinases. This member also belongs to the F-box protein family and is characterized by a motif of about 40 amino acids F-box. The F-box protein forms one of the four subunits of the ubiquitin ligase complex called SCF (SKP1-cullin-F-box), which are part of the ubiquitin-protein body system (UPS). F-box proteins are classified into three classes: Fbws containing the WD-40 domain, Fbl containing a leucine-rich repeat, and Fbx containing different protein-protein interaction modules or unrecognizable motifs. The protein encoded by this gene belongs to the Fbxs class, which is one of the first proteins to discover the F-box motif.