A metabolome is a collection of small molecule metabolites in an organ or cell that is used to identify biomarkers that can diagnose and predict disease. However, the value of metabolomics analysis has been redefined from a simple biomarker identification tool to a technique for discovering activity drivers of biological processes. Metabolites are not only markers of the body's phenotype, they can also affect the physiological functions of cells by regulating the levels of other omics (genomics, epigenomes, transcriptomes, and proteomes). 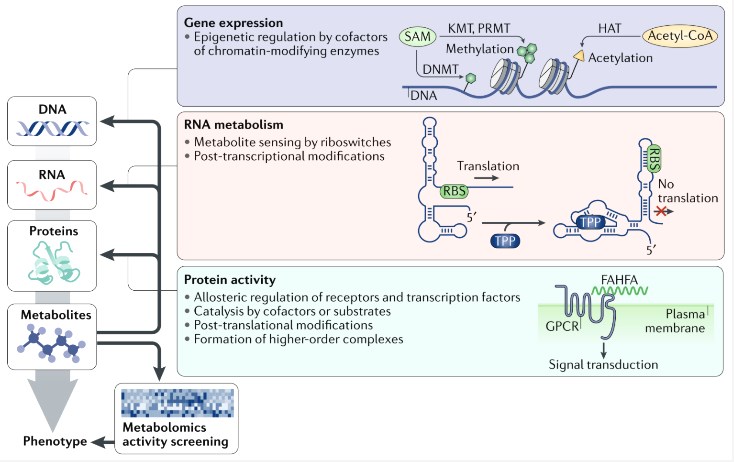 Metabolomes represent the most downstream stage in the entire dynamic system. Within the gene-protein-metabolite-phenotype framework, metabolites have been used as a dynamic and sensitive measurement method for phenotypes at the molecular level. It is widely accepted, making metabolomics the forefront of exploring biomarkers and mechanisms related to pathophysiological processes. In addition, metabolites have far-reaching regulatory activities. In fact, metabolites can interact with and play a positive regulatory role at all other omics levels. Through this interaction, metabolites can directly regulate physiological processes and phenotypes as regulators. Much research has been done on the regulatory functions of metabolites in the past few decades, and some pioneering results have been achieved, such as the lactose operon theory in bacteria; glucose, fatty acids and other lipids can be regulators of insulin secretion and sensitivity; mTOR Kinases act as nutrition and energy sensors. Thanks to the development of metabolomics technology, the discovery of physiologically active metabolites has grown rapidly, such as NAD+ promotes deacetylase activity and combats age-related changes; lactic acid regulates neural excitability and plasticity; α-ketoglutarate Macrophage activation and immunity; malonyl-CoA controls adult neural regeneration; taurine induces myelin basic protein expression. Cancer cell metabolism studies have found that the accumulation of carcinogenic metabolites such as fumaric acid, 2-hydroxyglutaric acid, and succinic acid causes abnormal signal regulation and forms a carcinogenic environment. Therefore, metabolites have a great impact on cell physiology, supporting their important role as biologically active substances.

Metabolites can drive key covalent chemical modification processes of DNA and RNA (such as methylation) and proteins (post-translational modifications). The dynamic characteristics of these chemical modifications have been shown to have a huge impact on cell function.The post-translational modification process of proteins contains at least dozens of different small molecules, enabling different amino acids to be combined in the enzymatic reaction, such as lysine acetylation, cysteine ​​palmitoylation or acylation. It is worth noting that acetylation can also occur under non-enzymatic catalysis. At this time, the stoichiometry is relatively low and the function is unclear. Other post-translational modified metabolites include succinyl-CoA and active sugar molecules such as UDP-glucose. Some active metabolites also exist to regulate anti-inflammatory responses, protein homeostasis, or enzyme activity. The bioactive metabolites involved in these three processes are itaconic acid, ATP-ribose, and glutaryl coenzyme A, respectively. Many proteins can also be methylated by accepting the methyl groups of S-adenosylmethionine (SAM) through their own lysine residues. It is worth noting that the strength of many metabolite-induced protein modifications depends directly on the metabolic state of the cell, so active metabolites represent a powerful phenotypic regulation. The most critical modification of DNA is methylation, which transfers the SAM methyl group to cytosine. This modification was originally established during embryonic development and persists throughout the life cycle, and it exhibits a high degree of dynamics in different cell types, tissues and developmental stages, and during aging. SAM and other metabolites, such as glycine, pyruvate, galactose, and threonine, can be used as cofactors for post-transcriptional RNA modifying enzymes. These RNA modifications serve as sensors and transducers of information to control metabolic rates (such as oxygen consumption) and protein synthesis. However, their role has not been fully revealed. In addition, enzymatic histone modifications such as lysine acetylation, lysine and arginine methylation, and serine phosphorylation are key regulators of epigenetics, which directly affect gene expression, chromosome packaging, and DNA repair.

Metabolite-macromolecule non-covalent interaction is the second mode of cell activity regulation. Typical examples are competitive binding of metabolites to the active site of an enzyme, and binding of metabolites to sites other than the active site to alter enzyme activity. These cognitions apply not only to enzymes, but also to a variety of regulatory rRNAs (metabolically controlled ribosome switches), proteins and various other molecules.

G protein-coupled receptors (GPCRs) are the best examples in the study of metabolite activation signal molecules, and this protein is also one of the earliest proteins identified as drug targets. Mouse G protein-coupled receptor 91 (GPR91, also known as succinate receptor 1) is activated by succinate to control blood pressure. GPR40 (also known as free fatty acid receptor 1) is activated by several fatty acids, including palmitic hydroxystearic acid (PAHSA), which is an endogenous lipid. Binding of metabolites to these receptors triggers a highly specific signaling response, which leads to the activation of specific cells in the signaling network. The same is true for the regulation of transcription factors and gene expression. For example, food-derived phytoestrogens cause atypical activation of estrogen receptors, regulate cell metabolism and negatively affect breast cancer cells' response to treatment. At the level of transcription and translation, metabolites can function by regulating ribosome switches, including lysine, glutamine, cobalamin, thiamine pyrophosphate, and purine. In this process, metabolites bind to different regions of the mRNA, alter the conformation of the mRNA, and ultimately regulate protein translation. Metabolites can also facilitate the assembly of higher molecular proteins, such as the bacterial glucose-1-phosphate uridine transferase galF assembled into multimers in the presence of ATP. In addition, active metabolites can also control the absorption and utilization of other essential nutrients, such as the absorption of iron by plants depends on the presence of local reducing agents in the root system.