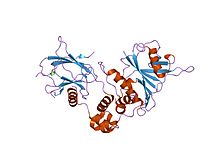 Under aerobic conditions, it can catalyze the hydroxylation of human HIF-α specific proline residues. Taylor named it HIF prolyl hydroxylase3,2,1 (HPH3.2.1) according to this function. 2002 also found that fourth HIF prolyl hydroxylase PHD4, PHD4 only play its regulatory role in the over-expression of HIF-1α. Three kinds of prolyl hydroxylase were expressed but the amount of the differences in various tissues. PHD1 mRNA is expressed in a variety of tissues, especially in the placenta and testis; PHD2 mRNA is also widely expressed, and PHD3 is expressed at higher levels in the heart and placenta. 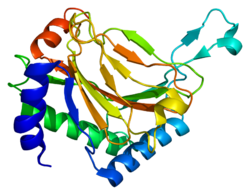 Figure 2. Structure of the PHD2 protein.

The physiological function of PHD

All three enzymes of the PHDs family can hydroxylate proline residues in the ODD region of the HIF-1α amino terminal, but in vitro studies have found that their activities are not the same. The order of activity intensity is: PHD2> PHD3> PHD. In a mammal, PHD2 end having a unique catalytic -N end zinc finger structure, which are conserved in the structure of the nematode EGL-9. However, PHD1 and PHD3 do not exist in this structure, indicating that PHD2 has the highest homology to EGL-9 of the nematode, and HIF-1 was found to be stably present in Egl-9 mutant nematodes. It has been proved that Egl-9 is an important factor affecting HIF activity, which also indicates that PHD2 in mammals is an important factor affecting HIF-1α activity. The change of PHDs expression before and after hypoxia determines its ability to regulate HIF-1α. It was found that the expression of PHD3 and PHD1 in MDA-435 breast cancer cells was almost unchanged during hypoxia, while the expression of PHD2 was significantly increased.

Most solid tumors have different levels of hypoxia. PHD activity decreases during hypoxia, HIF degradation is hindered, and it accumulates intracellularly. HIF is expressed in most human tumors, such as gastric cancer, colon cancer, prostate cancer, breast cancer, etc. HIF promotes the transcription of hypoxic response genes. Hypoxic genes are involved in tumor angiogenesis, cell energy metabolism, tumor metastasis, and ion metabolism. Mainly encodes the following products: erythropoietin (EPO), vascular endothelial growth factor (VEGF), hemoglobin oxygenase (HO)-1, inducible NO synthase (iNOS), glucose carrier protein (Glut)-1, insulin Like growth factor (IGF) -2, endothelin-1, transferrin, tyrosine hydroxylase. These products are highly expressed in tumor tissues and are involved in tumor cell metabolism, vasodilation, neovascularization, and tumor metastasis. It can be seen that HIF-1 plays a key role in the malignant progression of tumors. HIF overexpression and enhanced activity can promote tumor development and metastasis, and are closely related to tumor drug resistance and apoptosis of tumor cells. As an important regulator of HIF, PHD can influence the occurrence and development of tumors with the help of HIF.