Small G-proteins (Figure 1), also known as Small GTPases, are a family of hydrolase enzymes that can bind and hydrolyze guanosine triphosphate (GTP). They are a type of G-protein found in the cytosol that are homologous to the alpha subunit of heterotrimeric G-proteins, but unlike the alpha subunit of G proteins, a small GTPase can function independently as a hydrolase enzyme to bind to and hydrolyze a guanosine triphosphate (GTP) to form guanosine diphosphate (GDP). The best-known members are the Ras GTPases and hence they are sometimes called Ras subfamily GTPases. A typical G-protein is active when bound to GTP and inactive when bound to GDP (i.e. when the GTP is hydrolyzed to GDP). The GDP can be then replaced by free GTP. Therefore, a G-protein can be switched on and off. GTP hydrolysis is accelerated by GTPase activating proteins (GAPs), while GTP exchange is catalyzed by guanine nucleotide exchange factors (GEFs). Activation of a GEF typically activates its cognate G-protein, while activation of a GAP results in inactivation of the cognate G-protein. Guanosine nucleotide dissociation inhibitors (GDI) maintain small GTP-ases in the inactive state. Small GTPases regulate a wide variety of processes in the cell, including growth, cellular differentiation, cell movement and lipid vesicle transport. 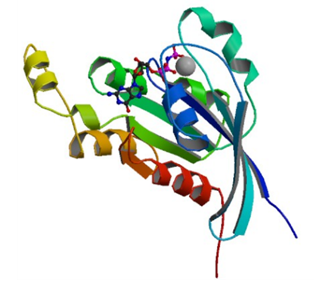 There are more than a hundred proteins in the Ras superfamily. Based on structure, sequence and function, the Ras superfamily is divided into five main families, (Ras, Rho, Ran, Rab and Arf GTPases). The Ras family itself is further divided into 6 subfamilies: Ras, Ral, Rit, Rap, Rheb, and Rad. Each subfamily shares the common core G domain, which provides essential GTPase and nucleotide exchange activity. The surrounding sequence helps determine the functional specificity of the small GTPase, for example the 'Insert Loop', common to the Rho subfamily, specifically contributes to binding to effector proteins such as IQGAP and WASP. The Ras family is generally responsible for cell proliferation, Rho for cell morphology, Ran for nuclear transport and Rab and Arf for vesicle transport.

The Ras superfamily of small GTPases consist of more than 150 members, which based on their sequence homology, are divided into several subfamilies such as Rho, Ras, Ran, Rab, Arf and Rad/Rem/Gem/Kir. This group of small GTPases serve as binary switches cycling between GDP-bound inactive and GTP-bound active state. The regulatory proteins for this switch include guanine nucleotide exchange factors (GEFs), GTPase activating proteins (GAPs) and guanine nucleotide dissociation inhibitors (GDIs).

The Rho family of small GTPases consists of at least 20 members, the most extensively characterized of which are the Rac1, RhoA and Cdc42 proteins. In common with all other small GTPases, the Rho proteins act as molecular switches that transmit cellular signals through an array of effector proteins. This family is involved in a wide range of cellular responses, including cytoskeletal reorganization, regulation of transcription, cell migration, cellular transformation and metastasis.

There are approximately 10 members of this subfamily split between Ras, Ral and Rap proteins. Ras proteins function in the Raf/ERK signaling pathway which controls proliferation and differentiation. Ral proteins function in the early steps of endocytosis, whereas Rap’s function as antagonist of Ras and they are located to the late endosomal and early lysosomal compartments.

The Ran proteins regulate nuclear transport of macromolecules, and in the cell cycle checkpoint from DNA replication to entry into mitosis.

One of the largest subfamilies of small G-proteins, the Rab proteins regulate the flow of vesicles from the ER to the Golgi and onto the plasma membrane. They are ubiquitously expressed and are highly abundant.

Members of this subfamily (RGK subfamily) have wide ranging functions such as controlling cardiac hypertrophy, inhibiting insulin-stimulated glucose uptake in myocyte and adipocyte cell lines, as well as inhibiting voltage dependent calcium channels by binding to the b-subunit.

The Arf family consists of Arf proteins and Arf-like proteins (Arl’s). As a general rule the Arf proteins help regulate vesicle trafficking and membrane fusion in functions such as nuclear membrane fusion, negative regulation of Golgi vesicle transport, and plasma membrane invagination. This family is the most divergent of the small G-proteins being equally related to heterotrimeric G-protein family.