A coactivator is a transcriptional co-regulator that binds to an activator (transcription factor) to increase the rate of transcription of a gene or genome. Activators contain a DNA binding domain that binds to a DNA promoter site or a specific DNA regulatory sequence called an enhancer. The binding of the activator-coactivator complex increases the rate of transcription by recruiting a general transcriptional machinery to the promoter, thus increasing gene expression. The use of activators and coactivators allows for highly specific expression of certain genes, depending on cell type and developmental stage. Some coactivators also have histone acetyltransferase (HAT) activity. HAT forms a large polyprotein complex that attenuates histone-DNA binding by acetylating the N-terminal histone tail. This provides more space for the transcription machinery to combine with the promoter, thus increasing gene expression. Activators are present in all organisms, but coactivators are usually found only in eukaryotes because they are more complex and require more complex gene regulation mechanisms. In eukaryotes, coactivators are usually proteins located in the nucleus. 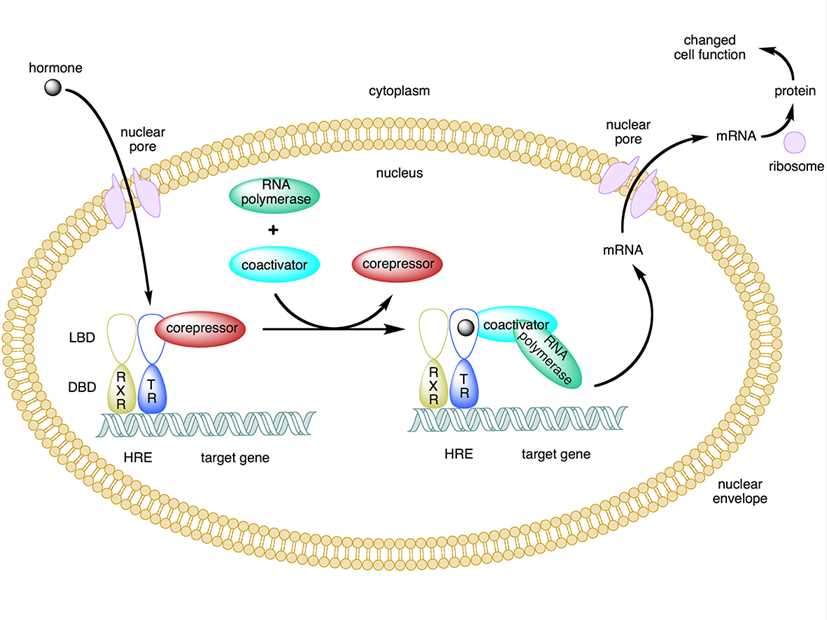 Figure 1. The activator, thyroid hormone receptor (TR), is bound to a corepressor preventing transcription of the target gene. Binding of a ligand hormone causes the corepressor to dissociate and a coactivator is recruited. The activator bound coactivator recruit RNA polymerase and other transcription machinery that then begins transcribing the target gene.

Some coactivators indirectly regulate gene expression by binding to an activator and inducing a conformational change, and then allowing the activator to bind to a DNA enhancer or promoter sequence. Once the activator-coactivator complex binds to the enhancer, RNA polymerase II and other general transcriptional mechanisms are recruited to the DNA and begin to transcribe.

Transcriptional regulation is one of the most common ways in which organisms alter gene expression. The use of activation and co-activation allows for better control over the timing, location and amount of protein production. This allows each cell to respond quickly to environmental or physiological changes and helps mitigate any damage that may otherwise occur when unregulated.

Mutations in coactivator genes that result in loss of protein function or are associated with diseases and conditions such as birth defects, cancer (especially hormone-dependent cancer), neurodevelopmental disorders, and intellectual disability (ID). Disorders that result in overexpression or under-expression of coactivators may be adversely associated with many drugs, particularly antihormonal drugs, and are associated with cancer, fertility problems, and neurodevelopmental and neuropsychiatric disorders. For a specific example, the CREB-binding protein (CBP) is dysregulated - it acts as a co-activator of many transcription factors in the central nervous system (CNS), reproductive system, thymus and kidney - associated with Huntington's disease, leukemia, Rubinstein-Taybi syndrome, neurodevelopmental disorders and immune system defects, hematopoietic function and skeletal muscle function.