The Hippo signaling pathway is a conserved regulator of proliferation and cell survival in metazoans. The core of the pathway consists of a kinase cascade with the tumor suppressor Hippo (and its mammalian orthologues, MST1 and MST2) as the upstream kinase. Hippo activation is coupled to diverse stimuli, including cell contact, cell stress, and growth factor receptor signaling. These stimuli engage the Hippo pathway via multiple different signaling mechanisms that are cell type and cell context dependent. Notably, distinct mechanisms that control Hippo signaling have been uncovered in hematopoietic, epithelial, and mesenchymal lineages, and in cells exposed to strong inducers of apoptosis. 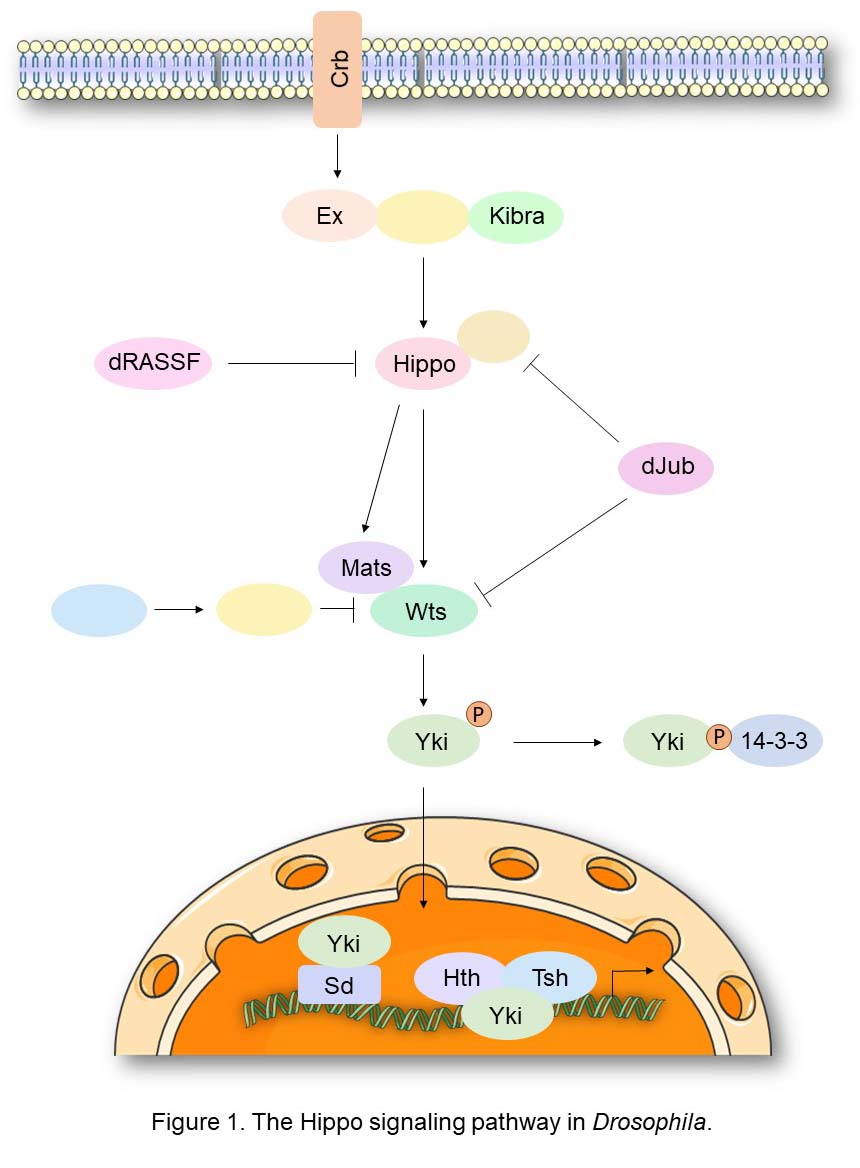 The Hippo signaling pathway was first identified in Drosophila through genetic screens for genes controlling of tissue growth. At the core of this signaling cascade is the Hippo kinase, which functions as a tumor suppressor and regulator of organ size. Hippo binds and phosphorylates the non-catalytic scaffold protein Salvador (Sav), facilitating Hippo-mediated phosphorylation and activation of the Warts (Wts) kinase. The latter acts with the adaptor protein Mats by direct binding. This cascade culminates in the Wts-mediated phosphorylation of the oncogenic transcriptional coactivator Yorkie (Yki). As a result, Yki is bound by 14-3-3 proteins leading its cytoplasmic retention and consequent inactivation. Yki is the critical downstream target of Hippo signaling as the overgrowth phenotypes observed in the Hippo, Sav, or Wts loss-of-function mutants are associated with the constitutive nuclear localization of Yki, and correspondingly Yki inactivation rescues these phenotypes. Yki’s function requires association with TEA-domain (TEAD) family DNA-binding transcription factors, including Scalloped (Sd), Homothorax (Hth), and Teashirt (Tsh). Key target genes activated by Yki include Cyclin E, DIAP1, and the microRNA bantam, which confer increased proliferation and defects in developmental apoptosis. 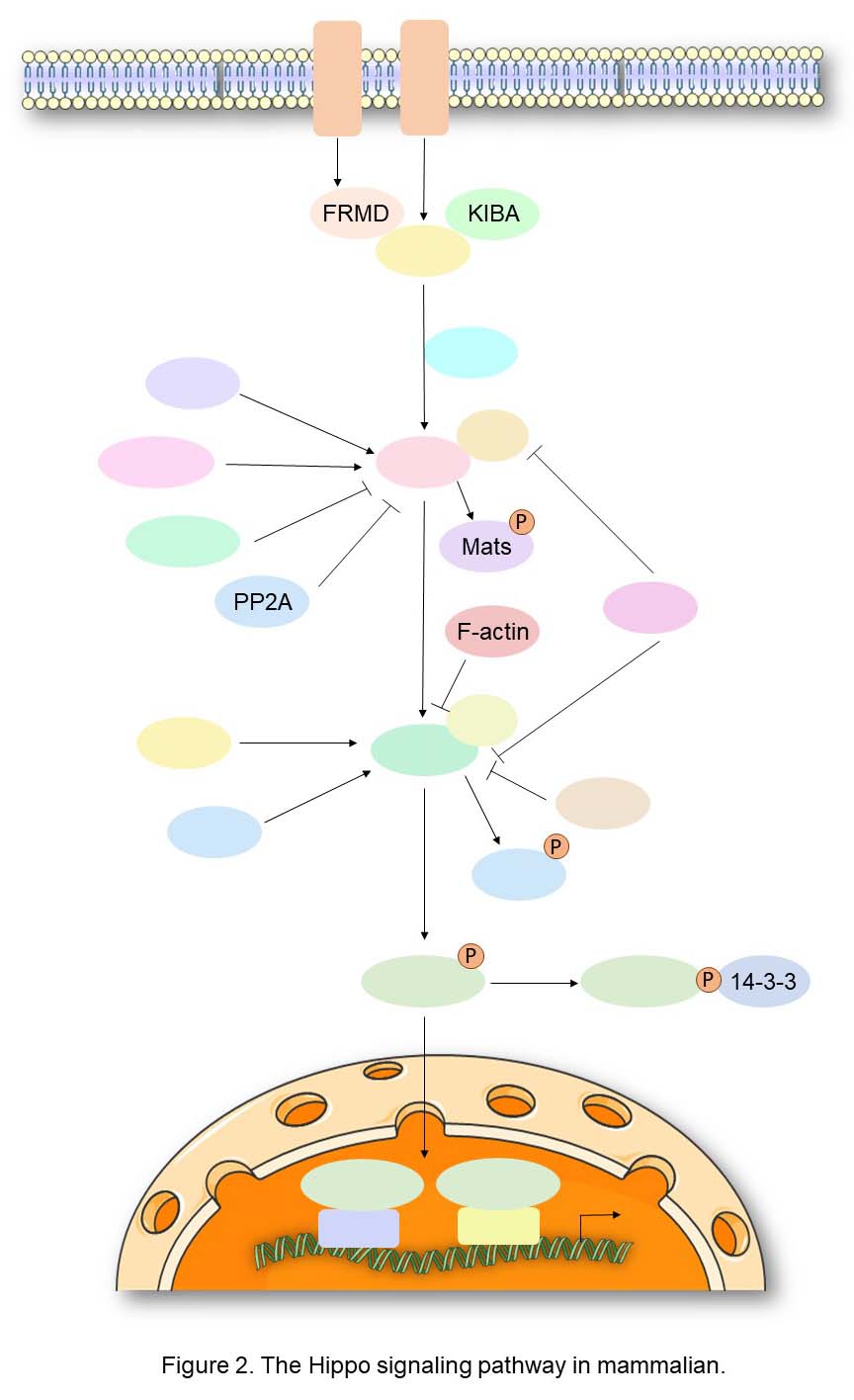 All of the core components of the Hippo signaling pathway are conserved and duplicated in mammalian genomes, except for Sav and Yki that are present as single orthologues in vertebrates, (SAV1/WW45 and YAP, respectively), although YAP has a paralogue, TAZ, which is also negatively regulated by this pathway. These components in mammals form a kinase cascade similar to that observed in flies, and several loss-of-function mutant phenotypes observed in Drosophila can be rescued by the expression of their human counterparts. Indeed, the sterile 20-like kinases MST1/STK4 and MST2/STK3, orthologues of the Drosophila Hippo kinase, interact with their regulatory subunit SAV1 to form an active complex that can phosphorylate and activate the kinases LATS1 and LATS2, the direct orthologues of Warts. LATS1, 2 are regulated by the Mats orthologues, MOBKL1A/B (collectively referred to as MOB1), which are also phosphorylated by MST1/MST2 to enhance binding in the LATS1, 2-MOB1 complex. Activated LATS1, 2 phosphorylates the transcriptional coactivator YAP on five different consensus HXRXXS motifs. As for Yki in Drosophila, the phosphorylation of YAP at Ser127 (Ser89 for TAZ) promotes their cytoplasmic retention through 14-3-3 binding. Moreover, phosphorylation of Ser381 primes YAP for subsequent phosphorylation by CK1 in a phosphodegron, thereby promoting the recruitment of the SCFβ-TRCP E3 ubiquitin ligase which catalyzes YAP ubiquitination, ultimately leading to proteosomal degradation of YAP. Unphosphorylated YAP/TAZ primarily localize in the nucleus, where they interact with DNA-binding transcription factors such as TEAD1-4 or SMAD proteins, in order to regulate a transcriptional program that promotes cell survival and proliferation. 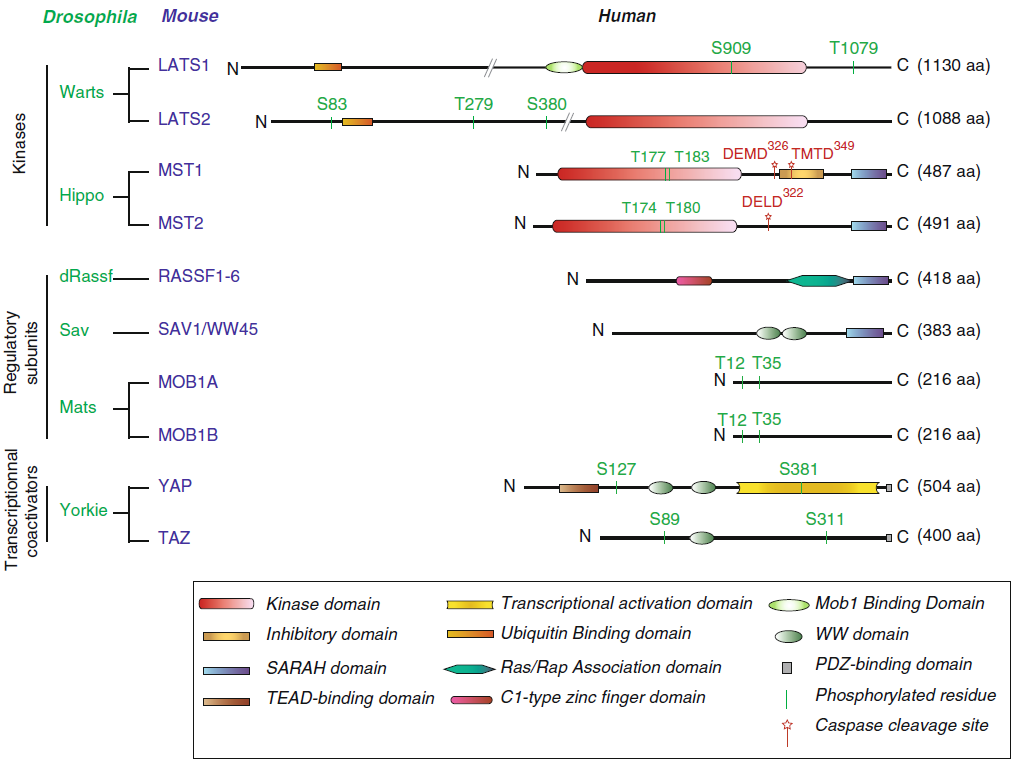 Merlin contains an N-terminal FERM domain that comprises three subdomains organized into a cloverleaf-like structure, followed by a coiled-coil domain and a charged C-terminal tail. The NF2 allele is alternatively spliced resulting in two predominate forms of the Merlin protein (isoform 1 and 2) that differ at the extreme C-terminus. Merlin and another FERM domain protein, Expanded, were first identified as upstream regulators of Hippo signaling through genetic screens in Drosophila. Merlin regulates the expression and localization of YAP in mammalian cells in a manner similar to what has been observed in flies. In Drosophila, Merlin was shown to form an apical complex with Kibra and together they activate Sav and Wts, leading to Yki phosphorylation and inactivation. Yeast two hybrid and biochemical studies indicated that Merlin directly binds to Sav through its N-terminal FERM domain and Kibra through its C-terminal half.

As members of the Motin protein family, Angiomotin (Amot), Angiomotin-like 1 (AmotL1), and Angiomotin-like 2 (Amotl2) are characterized by a conserved N-terminal glutamine-rich domain, followed by a coiled-coil domain and a C-terminal PDZ-binding motif. Recent work has implicated the Angiomotin family members in the regulation of Hippo-YAP signaling. At least under conditions used for immunoprecipitation, the Angiomotins are arguably one of the strongest binding partners for YAP, as evidenced by four independent studies identifying them as major YAP-associated proteins. The interactions between the Angiomotins and YAP are mediated through PPXY motifs within the N-terminal regions of the Angiomotins and the conserved WW domains of YAP. The Angiomotins function as negative regulators of YAP and its paralog TAZ by sequestering them in the cytoplasm. Loss of function studies by knocking down members of the Motin family in cells that express endogenously at least one of three members of the family demonstrated that silencing of AmotL2 but not AmotL1 increased the localization of YAP and Taz to the nucleus and induced cellular transformation in MDCK and MCF10A cells. In addition to controlling YAP subcellular localization, the Angiomotins have been reported to promote YAP phosphorylation and diminish transcription of two known YAP target genes, CTGF and Cyr61. One study suggested that the Angiomotins bind to and enhance the kinase activity of LATS1/2, thereby increasing YAP phosphorylation. Given that other studies have shown that the Angiomotins can regulate YAP activity independent of Hippo signaling, the precise functions of the Motin family members in Hippo signaling remain to be defined.

MST1/2 proteins have long been the subject of intense study because of their involvement in stress-induced apoptosis. In this context, MST1/2 are activated by autophosphorylation and caspase-dependent cleavage, which liberates the ~35 KDa N-terminal kinase domain from a C-terminal autoinhibitory domain; active kinase then translocates the nucleus and promotes apoptosis by phosphorylating relevant substrates such as Histone H2B. However, the caspase cleavage site of MST1/2 is not conserved in Hpo, and mutant alleles of hpo that encode an analogous ~35 KDa product lead to loss- rather than gain-of-function mutations in Drosophila. Indeed, the 35 KDa MST1/2 cleavage products lack the C-terminal SARAH domain that is required for MST/Hpo-WW45/SAV binding in Drosophila. It, therefore, appears that at least in some contexts, MST1/2 are regulated differently and connect to their downstream effectors via different mechanisms compared to their Drosophila counterpart.

MST1/2 activity is also regulated by heterodimerization with RASSF family proteins. The human genome encodes six distinct RASSF family members (RASSF1 to -6), each of which contains a Ras association (RA) domain and a C-terminal SARAH domain. Most RASSF family members have been implicated as tumor suppressors, and their expression is frequently inactivated through epigenetic silencing in human cancers. Their tumor suppressor activity can often be attributed, at least in part, to SARAH domain-mediated heter-odimerization with MST1/2. This interaction may activate MST1/2 by targeting MST1/2 to their endogenous activators and substrates or by liberating MST1/2 from their inhibitors (such as the kinase Raf-1).

Accompanying the complex mechanisms of MST1/2 regulation is the complexity of known MST1/2 substrates. Besides the core Hippo pathway components WW45, MOB1 and LATS1/2, MST1/2 have been shown to phosphorylate a diverse array of substrates, such as Histone H2B, transcription factors FOXO1 and FOXO3, and the LATS1/2-related kinases Ndr1/Ndr2, mostly in response to apoptotic stimuli. It will be important to define the contribution of these pathways to the overall tumor suppressor function of MST1/2, especially in the context of intact mammalian tissues. 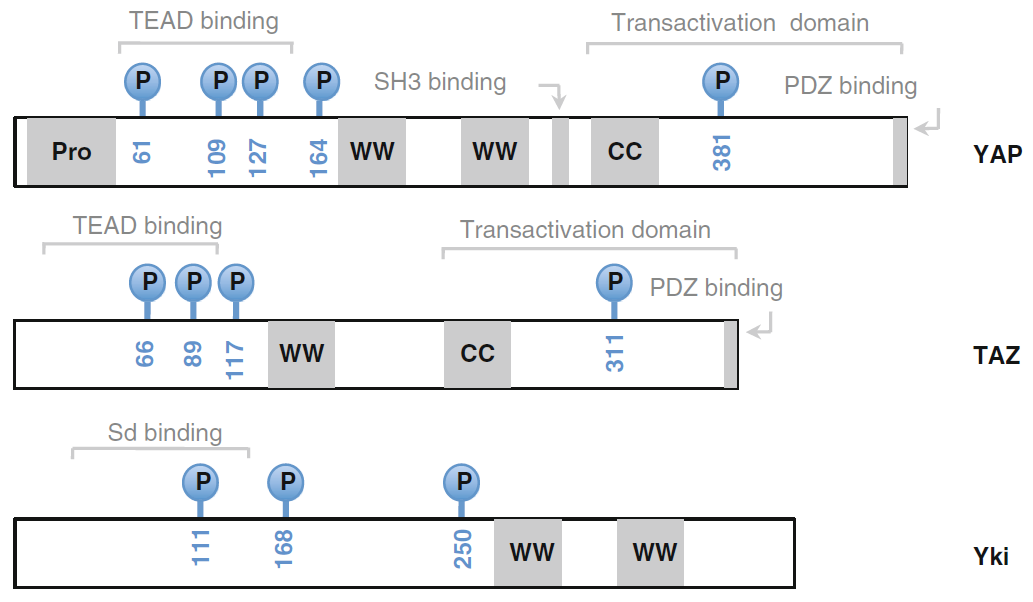 The Yes-associated protein (YAP) and WW domain-containing transcription regulator 1 (WWTR1, also known as TAZ) are two transcription co-activators that act downstream of the Hippo tumor suppressor pathway. YAP/TAZ regulate expression of a large number of genes that are important in controlling organ size, tumorigenesis, and stem cell functions. The activity of YAP/TAZ is mainly inhibited by LATS kinases of the Hippo pathway. Upon phosphorylation by LATS kinases, YAP/TAZ are sequestered in the cytoplasm and undergo ubiquitination mediated degradation. YAP/TAZ are also inhibited by interaction with cell junction proteins including angiomotin and a -catenin. Moreover, as transcription co-activators, YAP/TAZ need to associate with DNA-binding proteins such as TEAD family transcription factors to induce gene expression. Hence, the activity and specificity of YAP/TAZ in gene expression is also dependent on their nuclear partners.

The Hippo signaling pathway involves a kinase cascade involving the Salvador (Sav), Warts (Wts) and Hippo (Hpo) protein kinases. Many of the genes involved in the Hippo signaling pathway are recognized as tumor suppressors, while Yki/YAP/TAZ is identified as an oncogene. Many of the pathway components recognized as tumor suppressor genes are mutated in human cancers. For example, mutations in Fat4 have been found in breast cancer, while NF2 is mutated in familial and sporadic schwannomas. Additionally, several human cancer cell lines invoke mutations of the WW45 and MOBK1B proteins. YAP/TAZ can reprogram cancer cells into cancer stem cells. YAP has been found to be elevated in some human cancers, including breast cancer, colorectal cancer, and liver cancer. This may be explained by YAP’s recently defined role in overcoming contact inhibition, a fundamental growth control property of normal cells in vitro and in vivo, in which proliferation stops after cells reach confluence (in culture) or occupy maximum available space inside the body and touch one another. This property is typically lost in cancerous cells, allowing them to proliferate in an uncontrolled manner. In fact, YAP overexpression antagonizes contact inhibition.