The mammalian target of rapamycin (mTOR) signaling pathway integrates both intracellular and extracellular signals and serves as a central regulator for cell metabolism, growth, proliferation, and survival.

mTOR links with other proteins and is a core component of two distinct protein complexes, mTOR complex 1 and mTOR complex 2. Both regulate different cellular processes.

mTORC1 has five components: mTOR is the catalytic subunit of the complex; Raptor, the regulatory-associated protein of mTOR, affects mTORC1 activity by regulating the assembly of the complex and by recruiting substrates for mTOR; mammalian lethal with Sec13 protein 8 (mLST8); prolinerich AKT substrate 40 kDa (PRAS40); and DEP-domain-containing mTOR-interacting protein (Deptor). PRAS40 and Deptor have been characterized as distinct negative regulators of mTORC1.

mTORC1 controls protein synthesis by phosphorylating the eukaryotic initiation factor 4E (eIF4E)-binding protein 1 (4E-BP1) and the p70 ribosomal S6 kinase 1 (S6K1). The phosphorylation of 4E-BP1 prevents its binding to eIF4E, enabling eIF4E to promote cap-dependent translation. The stimulation of S6K1 activity leads to increases in mRNA biogenesis, cap-dependent translation and elongation, and the translation of ribosomal proteins through regulation of the activity of many proteins.

Autophagy is a catabolic process that is important in organelle degradation and protein turnover. Studies have shown that mTORC1 inhibition increases autophagy, whereas the stimulation of mTORC1 reduces this process.

Mitochondrial metabolism and biogenesis are both regulated by mTORC1. Inhibition of mTORC1 by rapamycin lowers mitochondrial membrane potential, oxygen consumption, and cellular ATP levels, and profoundly alters the mitochondrial phosphoproteome.

mTORC1 can be activated by various stimuli such as growth factors, nutrients, energy, and stress signals.

Studies on rapamycin revealed that mTORC1 is a downstream mediator of several growth factors and mitogen-dependent signaling pathways, all of which inhibit a key negative regulator of mTORC1 signaling known as the Tuberous Sclerosis Complex (TSC) complex. TSC is a heterotrimeric complex comprised of TSC1, TSC2, and TBC1D7, and functions as a GTPase activating protein (GAP) for the small GTPase Rheb that directly binds and activates mTORC1.

mTORC1 also responds to intracellular and environmental stresses that are incompatible with growth such as low ATP levels, hypoxia, or DNA damage. Amino acids represent a strong signal that

positively regulates mTORC1. As amino acids are not only essential building blocks of proteins but also sources of energy and carbon for many other metabolic pathways, mTORC1 activation is tightly coupled to diet-induced changes in amino acid concentrations. 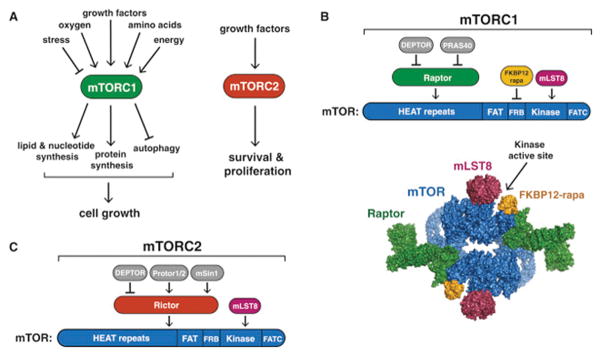 The mTORC2 complex regulates cell survival and cytoskeletal organization and can be activated by growth factor binding.

mTORC2 controls proliferation and survival primarily by phosphorylating several members of the AGC (PKA/PKG/PKC) family of protein kinases. The first mTORC2 substrate identified was PKCα, a regulator of the actin cytoskeleton. mTORC2 has also been shown to phosphorylate several other members of the PKC family, including PKCδ, PKCζ, as well as PKCγ and PKCε, all of which regulate various aspects of cytoskeletal remodeling and cell migration.

The most important role of mTORC2 is likely the phosphorylation and activation of Akt, a key effector of insulin/PI3K signaling. Once active, Akt promotes cell survival, proliferation, and growth through the phosphorylation and inhibition of several key substrates including the FoxO1/3a transcription factors, the metabolic regulator GSK3β, and the mTORC1 inhibitor TSC2.

mTORC2 primarily functions as an effector of insulin/PI3K signaling. Like most PI3K regulated proteins, the mTORC2 subunit mSin1 contains a phosphoinositide-binding PH domain that is critical for the insulin-dependent regulation of mTORC2 activity.

mTORC1 signaling plays an important role in glucose homeostasis by regulating pancreatic β-cell function. Studies show that mTORC1 hyperactivation from genetic or dietary manipulation results in insulin resistance has led many to speculate that mTORC1 inhibitors could improve glucose tolerance and protect against type 2 diabetes.

mTORC1 functions as a downstream effector for many frequently mutated oncogenic pathways, such as the PI3K/Akt pathway and the Ras/Raf/Mek/Erk (MAPK) pathway, resulting in mTORC1 hyperactivation in a high percentage of human cancers. Furthermore, the common tumor suppressors TP53 and LKB1 are negative regulators of mTORC1 upstream of TSC1 and TSC2, which are also tumor suppressors originally identified through genetic analysis of the familial cancer syndrome TSC. mTORC2 signaling is also implicated in cancer largely due to its role in activating Akt, which drives pro-proliferative processes such as glucose uptake and glycolysis while also inhibiting apoptosis.

We have compiled key proteins involved in the mTOR signaling pathway into one handbook for your reference.