In 1917, Morgan and colleagues found a gene in Drosophila, which is named Notch because of a loss of function that leads to a gap in the edge of wings. Subsequent studies found that Notch is expressed in many species from invertebrates to vertebrates. The structure of Notch families is highly conserved and plays a key role in cell differentiation and development. Up to now, studies have elucidated the major members and core transduction of Notch signaling pathway. However, as the research progresses, it is gradually realized that this pathway is actually in a very complicated regulatory network, which is consistent with its multiple function in development.

Notch receptor is a type I membrane protein with the relative molecular weight of about 30,000. There are four types of human Notch receptors: Notch1~4. It consists of extracellular and transmembrane subunits, and the two subunits form heterodimers via Ca2+ dependent non-covalent bonds. The extracellular subunit contains a set of tandemly arranged EGFR (epidermal growth factor receptor) and 3 family-specific LNR (Lin-12/Notch repeat) repeats. EGFR plays a pivotal role in the binding of Notch receptors to ligands. In Drosophila, the 11th and 12th EGFR of Notch receptors mediate their binding to ligands. LNR, located downstream of EGFR, is rich in cysteine and mediates a Ca2+ dependent interaction between the two subunits. Transmembrane subunits include transmembrane regions, RAM sequences, ankyrin (ANK) repeats, nuclear localization sequences, polyglutamine sequences, and PEST sequences (a peptide sequence that is rich in proline (P), glutamic acid (E), serine (S), and threonine (T)). The RAM domain is the major binding site for the Notch signaling effector CBF1 / RBPJκ. The ANK repeat domain is the binding site of Deltex and Mastermind. These proteins have a function of modification to the Notch signaling pathway. The PEST domain is associated with ubiquitin-mediated degradation of the Notch intracellular domain.

So far, it has been found that there are 6 signaling pathways that play key roles in the growth of multicellular organisms: hedgehog, bone morphogenetic protein, wingless, steroid hormone receptors, Notch and receptor tyrosine kinases signaling. Notch signaling is relatively simple compared with other signal pathway because there is no second messenger participation. The existing research proposed the "three-step proteolytic model" of Notch signaling activation. First, Notch is synthesized in the endoplasmic reticulum in a single-stranded precursor pattern, and then is cleaved in the Golgi apparatus by furin-like invertase into large fragments with a molecular mass of 180,000 extracellular regions, and a molecular mass of 120,000 transmembrane domains and small fragments of the intracellular region. These two fragments are combined to become heterodimers via Ca2+ dependent non-covalent bonds and then transported to the cell membrane. When Notch ligand binds to receptor, Notch receptor undergoes proteolysis twice. For the first time, Notch receptors were cut into two fragments by the ADAM metalloprotease family ADAM10 / Kuz or ADAM17 / TACE. The N-terminal cleavage product (extracellular region) is endocytosed by the ligand-expressing cells and the C-terminal cleavage product (active Notch receptor NICD) is subsequently enzymatically released by the γ-secretase complex consisting of presenilin 1/2, Pen-2, Aphl and Nicastrin. 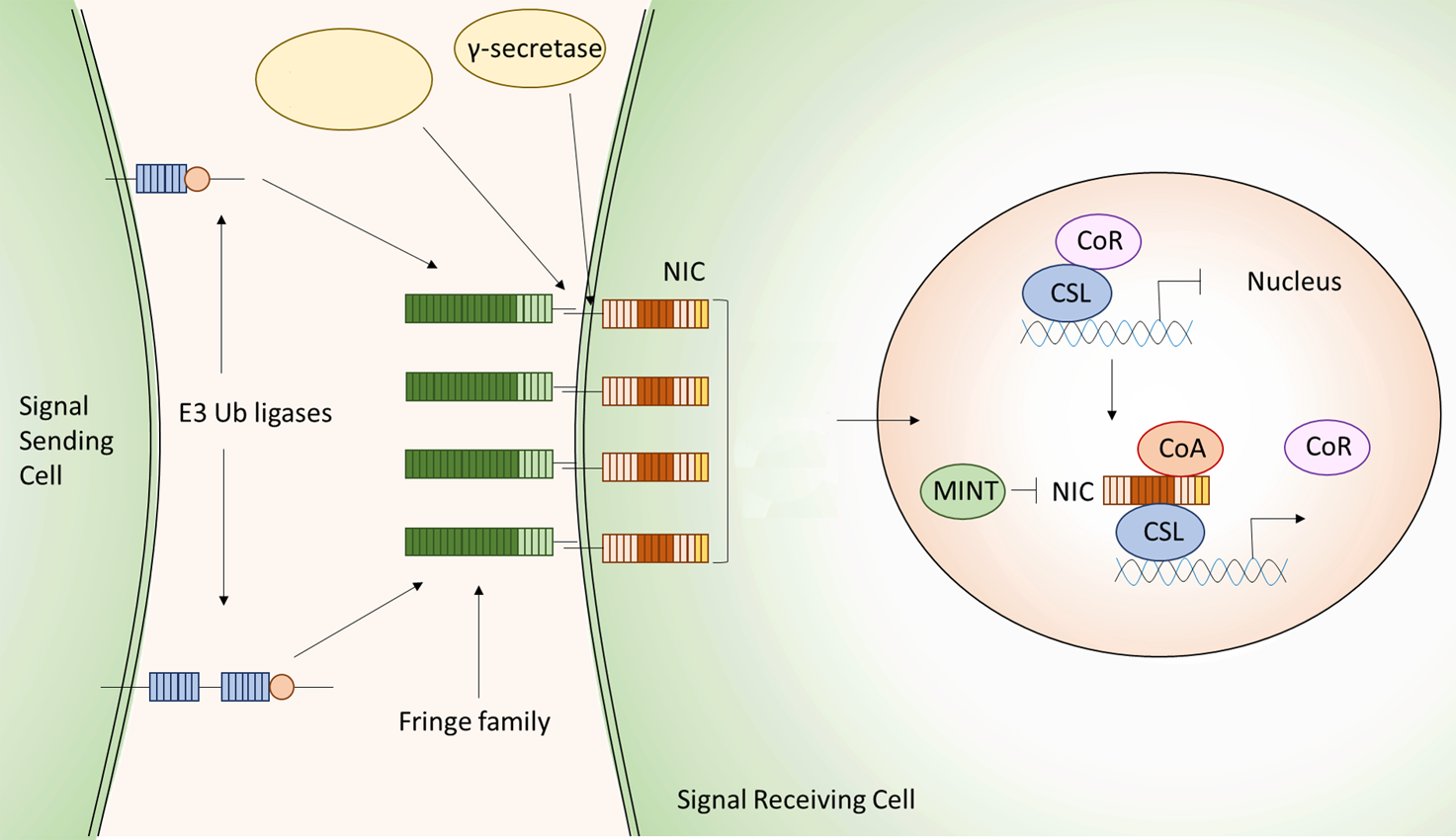 The canonical Notch signal pathway is also known as CBF1 / RBPJκ dependent pathway. CBF1 / RBPJκ is a transcriptional repressor that binds specifically to the DNA sequence "CGTGGGAA" and recruits proteins such as SMRT, SKIP, and type I / II histone deacetylases to form costimulatory complexes and inhibit the transcription of downstream genes. After Notch signaling is activated, NICD is released into the nucleus by the enzyme cleavage reaction, and the co-suppression complex is dissociated by binding of the RAM domain and the ANK repeat to CBF1 / RBPJK and recruitment of SKIP and MAML1 to form the co-active complex and activate the transcription of downstream genes. Many of the target genes for Notch signaling are members of the basic helix-loop-helix transcriptional repressor family, such as HES in mammals, XHey-1 in Xenopus laevis, and recently discovered BLBPs. In addition, a CBF1 / RBPJK independent Notch signal transduction exists. Recently, it has been reported that Drosophila Notch-binding protein Deltex is required for certain tissue-specific non-Su (H) dependent signals and that Deltex also has antagonistic function against Notch.

The function of the Notch signaling pathway was first found in studies of the nervous system of Drosophila. In the normal development of the nervous system, there is a side-effect suppression mechanism, so that the neural progenitor cells around neurons no longer differentiate into neurons, and develop into epithelial cells. The study found that Notch signal upregulates Notch molecules on the surface of the cell membrane and down-regulates the expression of its ligand Delta. On the contrary, Delta expression down-regulates the expression of Notch. This positive feedback mechanism allows the nuanced expression of Notch and its ligand during early development to be gradually magnified during development and thus determines the direction of differentiation of the cells. Not only the normal development and formation of the nervous system, Drosophila mesoderm, germ cells, sensory organs, etc., depend on Notch-mediated differentiation inhibition. However, the function of different Notch molecules in mammals is not exactly the same, and its mode of action is more complicated than that in Drosophila. The study found that Notch signaling plays a pivotal role in the development of lymphocytes. It can promote the formation of Tαβ cells and synergistically regulate the differentiation of CD4+ cells to Th1 / Th2 type with Gata3 gene and increase the number of peripheral immune organ borderline B cells. In addition, Notch signaling is essential for hematopoietic stem / progenitor cell self-renewal and plays an important regulatory role in the development and progression of blood vessels.

Notch signaling pathway has a very conservative mechanism in signal transduction, the abnormality of this regulatory mechanism often leads to congenital genetic diseases. It has been confirmed that the mutations of related genes in the Notch signaling pathway are associated with genetic diseases such as CADASIL, Aligile's syndrome and hypogastric hypoplasia. CADASIL is an autosomal dominant cerebral artery disease with subdural necrosis and leukoencephalopathy. The pathogenesis was mainly due to deletion or insertion of cysteine ??residues in the extracellular domain of Notch 3 gene expressed on vascular smooth muscle cells. Aligile's syndrome is an autosomal dominant genetic disease that can lead to the developmental defects of many organs such as heart, liver and kidney. The main cause of Aligile's syndrome is that the Jagged 1 gene mutation and cannot produce normal translation products. Delta 3 gene mutations can cause autosomal recessive diseases. In addition, the study found that Notch signaling disorders associated with certain cardiovascular diseases. Animal model experiments show that it may affect the cardiovascular system from four aspects, including vascular remodeling, vascular stability, choice of arteriovenous and heart development. Recent studies have found that the cleavage of amyloid precursor protein and Notch receptor are all dependent on γ-secretase / presenilin. So it is speculated that Notch signaling pathway may have some connection with the occurrence and development of Alzheimer's disease, and AD related research confirmed the change of Notch signal. 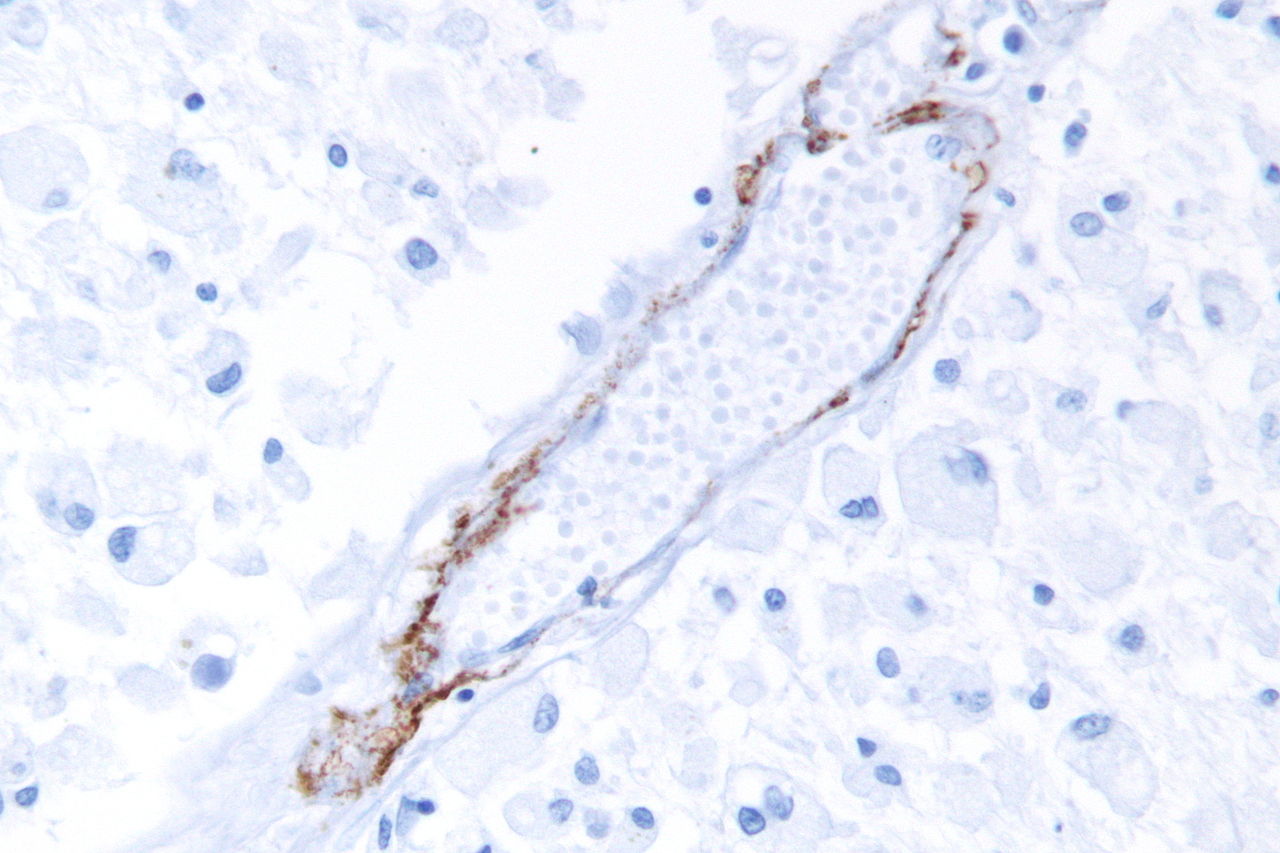 Figure 4. A micrograph showing punctate immunostaining (brown) with a Notch 3 antibody, as is characteristic in CADASIL.

Notch signaling pathway plays an important role in cell differentiation, proliferation and development of the body. It is also expected that the signal transduction abnormality will lead to the tumor. This relationship was first confirmed in human acute T-lymphoblastic leukemia due to chromosomal translocations in which the hNotch 1 gene is fused to the T-cell receptor β gene and a constitutively activated hNotch 1 mutant results in an over-activation of Notch signaling. Subsequent studies found that in prostate cancer, breast cancer, cervical cancer and other tumor cells, as well as their derived cell lines, there are abnormal expression of Notch receptors and ligands. In addition to mutations in Notch receptors and ligands that can cause tumors, mutations in cofactor MAML that mediate association of NICD with CSL in the signaling pathway can also lead to tumorigenesis. In addition, Notch signaling can interact with other signaling pathways to induce tumors. For example, Notch 1 mutants accelerate lymphoma formation and progression by synergizing with Myc. However, it was found that Notch also plays a role of tumor suppressor, which also reflects the cell microenvironment closely related to the specific function of Notch signaling.