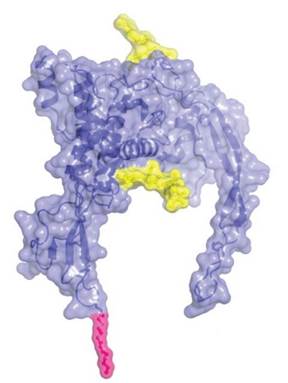 Wnt proteins are secreted glycoproteins, a total of 19 species in the human body. The Wnt gene was first discovered in 1982 in the study of the transcriptional mechanism of mouse mammary tumor virus. A protein mediated signal transduction of growth and development between cells was found in mouse breast cancer. The coding gene of the protein was called int1. Further study found that the gene in the normal embryonic development can make Drosophila be wingless. Combine the two words “wingless” and “int1”, known as Wnt. Since the crucial signal pathways during embryonic development are tightly regulated, the expression of both Wnt and Wnt antagonists are limited in time and space levels during development. The Wnt protein binds to the extracellular N-terminal cysteine-rich domain of the Fz receptor (there are 10 Fz in humans). The Fz protein is a family of transmembrane proteins that cross the cell membrane seven times which have a similar topological structure as the G protein-coupled receptors. The interaction of Wnt with Fz requires co-receptors to co-regulate the Wnt signal pathway. For example, low-density-lipoprotein-related protein 5/6 (LRP5/6) is required to mediate the canonical Wnt signal pathway. When Wnt binds to the receptor complex, the signal is transmitted to the cytoplasmic phosphoprotein Dsheveled (Dsh / Dvl), and studies show that Dsh interacts directly with Fz.

Wnt is a secreted glycoprotein ligand that is heavily modified and released into the extracellular environment prior to its transport. Studies found that Wnt protein is glycosylated and palmitoylated in the endoplasmic reticulum (ER). Porcupine proteins play an important role in Wnt palmitoylation. In the extracellular matrix, Wnt proteins can be bound and stabilized by heparan sulfate proteoglycans, including Dally and Glypican 3, which further limits the ability of Wnt to diffuse and modulate signals. Many secreted proteins that bind to Wnt and block their interaction with Fz or LRP5/6 in the extracellular matrix have been identified, including Dickkopf (Dkk), Wnt inhibitor WIF, soluble Frizzled-related protein (SFRP), Cerebrus, Frzb, and context dependent Wnt inhibitor Wise. All these suppressors are tightly regulated during embryonic development and are used to limit and form a gradient Wnt signaling to regulate developmental processes. The study also found that the regulatory factors Norrin and R-Spondin2 can bind to the LRP5/6 receptor and activate the Wnt signal pathway independent of Wnt ligand. SOST protein can inhibit Wnt signaling by binding to LRP5/6.

The canonical Wnt/β-catenin signal pathway was originally found in Drosophila and subsequently studied in flies, worms, fish and mice in depth and established a basic signal pathway framework. The hallmark of the canonical Wnt signal pathway is the accumulation and translocation of adhesion-related protein β-catenin within the nucleus. Without Wnt signaling, β-catenin in the cytoplasm is degraded by β-catenin destruction complex, which includes Axin, adenomatosis protein APC, protein phosphatase 2A (PP2A), glycogen synthase kinase 3 (GSK3), and casein kinase 1α (CK1α). Among them, CK1α and GSK3 are responsible for β-catenin phosphorylation, making it ubiquitinated and subsequent proteolytic destruction by the proteosomal machinery.

The complex of Wnt with its receptors Fz and LRP5/6 triggers a series of activities that target the destruction complex of β-catenin. Binding of Wnt to the Fz / LRP5/6 complex induces membrane translocation of the key signaling negative regulator Axin, which binds to the conserved sequence of the LRP5/6 cytosolic tail. It has been reported that microtubule-actin cross-linking factor 1 (MACF1) may play an important role in the membrane translocation of Axin, but the exact mechanism is still unclear. Axin binding to LRP5/6 during its membrane translocation is catalyzed by CK1γ or GSK3-mediated phosphorylation of LRP5/6. Importantly, CK1 and GSK3 play different roles at two levels of the canonical Wnt signal pathway. At the LRP5/6 level, they act as a positive regulator, and at the β-catenin level, they act as a negative regulator. Binding of Axin to LRP5/6 abolishes the negative activity of Axin on Wnt signaling, which in some way leads to the activation of Dsh. Dsh is phosphorylated by many kinases, including casein kinase 1 (CK1), casein kinase 2 (CK2), metastasis associated kinase (MAK), protein kinase C (PKC) and Par1. Phosphorylation of Dsh regulates the subcellular localization of Dsh and its ability to interact with effectors of Wnt signal pathway. Dsh protein is a modular protein that contains three distinct domains, DIX, PDZ and DEP. Among them, DIX and PDZ play a key role in regulating signals. Once Dsh protein is activated, it inhibits the activity of GSK3 enzyme and activates a series of complex signals to stop the degradation of β-catenin and induce its stability and accumulation in the cytoplasm. Stabilized β-catenin then enters the nucleus while the mechanism is not yet clear. The β-catenin has no nuclear localization sequence (NLS) and does not require importin proteins or Ran-mediated nuclear import into the nucleus. One hypothesis currently proposed is that β-catenin is "piggybacked" to the nucleus by other factors, possibly including Axin, which also appears to undergo nuclear shuttling. There is also no nuclear export sequence (NES) on β-catenin. Current research has identified two mechanisms for this process. One is related to Ran binding protein 3 (RanBP3) and the NES-bearing APC protein; the other is directly involved in nuclear pore complexes independent of Ran. In the nucleus, β-catenin acts as a transcriptional coactivator to exert its effects on gene transcription. A large number of nuclear β-catenin binding partners have been identified, of which the most representative is the DNA-binding transcription factor LEF/TCF. The complex binds to promoters of target genes including those required for tissue formation during embryogenesis, such as Siamois and Twin, and genes involved in cancer development, such as Myc and CyclinD1.

The PCP signal pathway emerged from the genetic study of Drosophila in which mutations in Wnt signaling proteins Fz and Dsh randomize the orientation of epithelial structures, including the stratum corneum and the sensory mane. The study also found that this signal pathway regulates the structure and directional migration of the actin cytoskeleton and appears to function independently of gene transcription. Fz co-receptors of non-canonical PCP signaling have not been specifically identified and demonstrated, and candidate factors include NRH1, Ryk , PTK7 and ROR2. The signal is then passed on to the Dsh, resulting in the activation of Dsh. The PDZ and DEP domains of Dsh were used to activate two parallel pathways respectively that activate the small GTPases Rho and Rac. In order to activate the Rho signaling branch, Wnt signaling induces the formation of the Dsh-Daam1 complex and activates Daam1. Dishevelled associated activator of morphogenesis 1 (Daam1) is a Formin homology protein that, in combination with Dsh and RhoA, suggests a positive feedback loop signal. Activated Rho induces activation of Rho-associated kinase (ROCK) and myosin, resulting in modification of the actin cytoskeleton and cytoskeletal rearrangement. The second branch requires the DEP domain of Dsh to activate Rac. This activation is independent of Daam1 and the activated Rac in turn activates JNK. JNK downstream factors of non-canonical signal pathways are still unknown. Although both Rho and Rac are involved in transcriptional regulation, it remains unclear what genes are regulated by these two GTPases in the non-canonical Wnt signal pathway.

The second branch of the non-canonical Wnt signal pathway is the Wnt/Ca2+ signal pathway. Although sharing many components of the PCP signal pathway, this pathway also has a clear distinction. This pathway can further regulate the classic Wnt/β-catenin signal pathway as well as the PCP signal pathway. The Wnt/Ca2+ pathway revealed that Wnt and Fz receptors stimulate intracellular Ca2+ release from the endoplasmic reticulum (ER), which is dependent on the G protein. Wnt5a, Wnt11 and Fz2 promote intracellular Ca2+ release without affecting the stability of β-catenin. Ca2+ release, which is caused by over-expression of Wnt5a and Fz2 in zebrafish embryos, can be inhibited by pertussis toxin and the alpha subunit of transducin, which also inhibit G protein signaling. These studies indicate that Wnt/Fz signaling induces intracellular Ca2+ release via the G protein. Ca2+ release and intracellular accumulation activate various Ca2+ sensitive proteins, including PKC and calmodulin-dependent kinase II (CamKII). Studies have shown that CamKII activates the transcription factor NFAT to regulate the fate of abdominal cells in the Xenopus embryos. CamKII also activates TGFβ kinase TAK1 and Nemo-like kinase (NLK) to inhibit β-catenin/TCF signaling. Ca2+ can also activate PKC, which regulates the process of tissue separation during gastrulation by activating the small GTPase CDC42. Taken together, these studies suggest that the Wnt/Ca2+ signal pathway plays an important regulatory role in both classical Wnt signaling and non-classical PCP signaling.

Wnt signal pathway involves in many complex cellular physiological activities and biochemical reactions, the dysfunction can lead to a variety of diseases. Abnormal activation of Wnt signaling or loss of intercellular adhesion function can induce tumorigenesis. The key role of β-catenin is out of control, which leads to colon cancer and rectal cancer. The Wnt signal pathway has both oncogenes and tumor suppressor genes that play important roles in the development of many human malignancies. Wnt signaling also regulates the proliferation and differentiation of hematopoietic stem cells and mesenchymal stem cells. The role of Wnt protein in embryonic development is obvious, affecting the formation of central nervous system, limbs, and heart, which can lead to a variety of birth defects and cardiovascular disease.