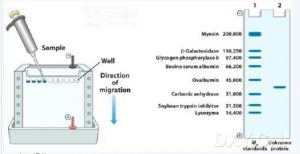 During the experiment, the protein sample was loaded in the stacking gel. To prevent protein sample diffusing in the electrode buffer, adding an equal volume of 40% sucrose or 50% glycerol to increase the density would be a good choice. To observe the mobility of protein samples, it’s better to add bromophenol blue dye or some other tracer dyes into the sample. These colored substances can migrate faster than any macromolecules. As long as the dye dose not move out of the gel, there would be no danger for the sample.

In the discontinuous system, as soon as the power is turned on, Glycine, proteins, chloride ions and bromophenol in HCI would be dissociated into anion, forming an ion flow and moving to the anode. Its mobility depends on the number of electric charges of the ion, molecular size and shape. However, when the glycine ions of electrophoresis buffer (pH8.3) entered into the stacking gel and encountered lower pH (6.7), which lowered down by nearly two units, almost close to the isoelectric point (5.97) of glycine, the dissociation degree of glycine suddenly drop, the amount of charge reduced significantly and then the mobility became slower.Protein sample entered into the stacking gel, pH changes has impact on its dissociation degree either, but the impact is much smaller than on glycine. Thus it has larger mobility than glycine. What’s more, the pore size of stacking gel is too large to cause obstruction to protein molecular. So, in the stacking gel, the mobility of various ions is in the order of: glycine <protein <BPB <Cl.

The decline of dissociation degree after the glycine entering into the stacking gel makes the sudden absence of mobile ions flowing, resulting in reduced conductivity and electric current decline. However, the entire electric current of the other part of the electrophoresis system remain unchanged. On the basis that conductivity is inversely proportional to potential gradient (E=I/n, E stands for potential gradient, I stands for current intensity and N stands for conductivity), there suddenly formed a high local potential gradient between Leading Ion-CI and slow ion-glycine. Protein components in this local potential gradient region quickly migrate to the CI-ions region at different speed under the function of the high electric field. Through this process, the protein sample has been concentrated for several hundred fold and the protein components are arranged in a certain order to form layer.

When the ion flow continued to move forward and entered into the resolving gel prepared by pH8.9 buffer, the protein molecule encountered resistance. Then the mobility became slow. At the same time, under the conditions of pH8.9, glycine would fully dissociate. Its electricity would increase, eliminating the phenomenon of ion missing. Each section of the gel recovered with a constant electric strength. Proteins begin to migrate at different rates, because of the sieving properties of the gel. Smaller protein-SDS complexes migrate more quickly than larger protein SDS complexes. Within a certain range determined by the porosity of the gel, the migration rate of a protein in the running gel is inversely proportional to the logarithm of its MW.

Seen from the principle above, main advantages of discontinuous polyacrylamide gel electrophoresis is that when the protein samples go through the stacking gel, they can form a tightly compressed layer and flow into the separating gel. With the protein components separated previously and compressed into layer, it can reduce the interference caused by the zone overlapping, thus improving the distinguish ability of electrophoresis. Just because of this advantage, a small amount of protein samples can be well separated too.

6. TEMED (N, N, N, N – tetramethylethylenediamine): by catalyzing ammounium persulfate to form free radicals, TEMED accelerated the polymerization of acrylamide and bis-acrylamide. Since TEMED only functions in a free base form, the polymerization reaction would be inhibited when the pH is low.

2. Inject the separating gel into the gap of the two glass sheets quickly, leaving space for the infusion of stacking gel (comb teeth length plus 1cm); cover the separating gel with 0.1% SDS carefully( when the concentration of acrylamide ≤ 8%) or isobutanol or water (w 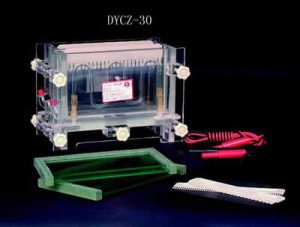 hen the acrylamide concentration ≥10%); the cover layer can prevent the diffusion of oxygen into the gel and inhibit the polymerization of the gel; place the gel vertically at room temperature.

3. When the polymerization of the separating gel completed, pour the cover liquid; wash the top of the gel for several times to remove the acrylamide that were unpolymerized; exclude the liquid on the gels as far as possible.

4. Determine the volume of the stacking gel in need; prepare the desired stacking gel according to the ingredients listed for the preparation of Tris- glycine SDS-polyacrylamide gel electrophoresis of stacking gel; Pipette the stacking gel directly on the separating gel, and insert clean supporting comb immediately, to avoid air bubbles; then add stacking gel solution to fill the gap between comb. Remove the comb after stacking gel polymerization, then the sample hole is formed.