Since the outbreak of COVID-19, it still seriously affects our lives. Therefore, the research on the pathogenesis of COVID19 and the development of related drugs will help to alleviate the epidemic situation and help to make our lives return to normal as soon as possible. Previous studies have shown that COVID19 is a disease with unique characteristics, including pulmonary thrombosis, frequent diarrhea, abnormal activation of inflammatory response and alveolar edema, rapid deterioration of lung function, and so on. However, the pathological basis behind these phenomena is still elusive.

In a recent study published in the journal Nature, Mauro giacca’s team from King’s College London, UK, analyzed the morphological characteristics of infected lung cells in the lungs of patients with COVID19, and found that they were morphologically abnormal and often multinucleated. The production of these syncytial bodies is due to the stimulation of SARS-CoV-2 spike protein on receptor cells. Based on these observations, they performed two high-power microscopic examinations on more than 3000 approved drugs to find inhibitors that inhibit spike-induced syncytial production. The authors focused on identifying 83 drugs that inhibit spike-mediated cell fusion, and focused on effective drugs that can prevent virus replication and related cytopathy.

First, the authors examined the organs of 41 consecutive patients who died of COVID19 between March and May 2020 at the University Hospital in Trieste, Italy. In addition to diffuse alveolar injury, frequent thrombosis, and extensive fibrosis, nearly 90% of these patients also found a special lesion, that is, atypical cells with syncytial characteristics, which contains a large number of multinucleated cells, and the number of nuclei ranges from 2 to 20. Most of these syncytial cells are true pneumonia cells because they express two kinds of pneumonia cell-specific markers (naspin and Surfactant B). In situ hybridization showed that these cells were positive for viral RNA. 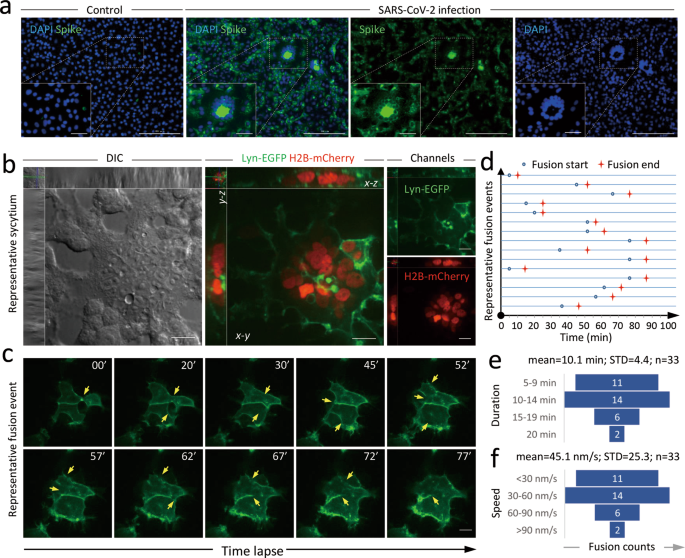 The authors suggest that the presence of lung syncytia in patients with COVID19 may be due to the fusion activity of SARS-CoV-2 spike protein. In vitro, the expression of spike protein cDNA in Vero cells leads to the production of syncytia. When these cells express ACE2 receptors, their presence on the plasma membrane also triggers the fusion of heterologous cells. At high magnification, the spike expressing Vero cells and spike positive syncytial bodies showed a large number of plasma membrane processes, showing filamentous pseudopodia extending and contacting with the plasma membrane of adjacent cells. These spike expressing cells and syncytia showed a sudden Ca 2+ oscillation in their cytoplasm. In contrast to SARS-CoV-2, no syncytial formation was observed when spike protein from SARS CoV was expressed, and the overexpression of MERS CoV spike protein also promoted syncytial formation.

Furthermore, the authors hope to find a clinically approved drug to inhibit SARS-CoV-2 spike mediated cell fusion. In this regard, they developed two detection methods for high-throughput screening (HTS) using high-content imaging. The first is based on the heterologous fusion between Vero and U2OS cells expressing spike (CFIA), and the second is based on the direct expression of the spike in Vero cells (SIA). Through these two methods, the authors screened 3825 drugs from two FDA / EMA-approved drug libraries (Prestwick chemistry library and the spectrum collection, MS discovery). In addition to the common drug molecules, a total of 3049 different small molecules in the two libraries were screened.

Subsequent studies have found that one of the most effective molecules is Niclosamide, which can significantly reduce the calcium oscillation and membrane conductance response in spike expressing cells by inhibiting TMEM16F / Anoctamin6 (calcium-activated ion channel and the activity of scramble to expose phosphatidylserine on the cell surface). These findings suggest the underlying mechanism of the pathogenesis of the disease and highlight the potential of using Niclosamide for the treatment of the disease.