According to the report of Grand View Research, the demand for recombinant technology, pharmaceutical biotechnology, and DNA sequencing technology is increasing based on disease diagnosis and treatment requirement, and the global biotechnology market is expected to grow at a compound annual growth rate of 12.3%. By 2020, the market size will be $606.8 billion.

The United States and Europe account for 81% of the global market. The biggest recombinant protein drug research firms (Amgen, Biogen IDEC, Johnson & Johnson, Eli Lily, Novo Nordisk, and Roche) are all from the United States or Europe, occupies 75% market share. From the number and speed of new drugs listed, the United States ranks first, which has a clear relationship with the freer drug price environment and high acceptance of new drugs for the doctors in the US. Europe has developed rapidly in recent years, taking the lead in approving the listing of recombinant human antithrombin (GTC biotherapeutic company), which is produced by transgenic animals (sheep).

The biological function of the recombinant protein is highly correlated with the folding and modification of the peptide, which determines that its research and development is much more difficult than small molecule chemical drugs. Recombinant protein production depends on a variety of biosynthesis systems, including choosing from bio-engineering E. coli, yeast, mammalian cells, etc. The determination of production system selection, vector construction, parameter optimization, separation and purification, activity testing and other steps depends on long-term theoretical guidance, experience, and practical results. 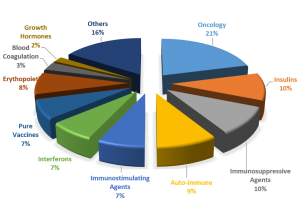 2. Current drug classification
According to the function and nature, recombinant drugs can be divided into eight categories

V. Human bone formation protein: applies for acute tibial fractures, spinal healing and promoting bone healing.
VI. Recombinant enzyme: applies to congenital enzyme deficiency replacement therapy.
VII. Fusion protein: is a small number of the recombinant drugs whose mechanism is inhibition.
VIII. Exogenous recombinant proteins: exogenous proteins can be used in the treatment of human disease, which has been validated during the development of monoclonal antibody drugs. However, only recombinant hirudin was approved on market, applies to thrombotic disease.

3. Research and development trends
The rapid development of recombinant drugs is inevitable, but there are several issues that must be addressed or optimized for development, including the production host, production yield, genetic engineering, post-translational modification and drug routing.

2) Genetically engineering and post-translational modifications of recombinant drugs
Highly purified recombinant proteins are identical or highly similar to human endogenous proteins, which could avoid immune responses. But about 30% of recombinant protein drugs are genetically engineered or modified by other means of translation. The genetic engineering change should be very cautious, for small changes in the sequence may lead to a large change in protein conformation, which will induce an immune response. Frequently used post-translational modifications are lipidation and PEGylation. Lipidization refers to the covalent attachment of fatty acids to the protein, thereby increases the drug affinity with serum albumin and prolongs the cycle and effect time in serum. PEGylation is divided into single PEGylation and multi-point PEGylation. PEGylation could achieve long-term effect purpose by reducing plasma clearance and degradation and inducing receptor-mediated intake. Additionally, PEGylation could shield antigen epitopes to improve drug safety. 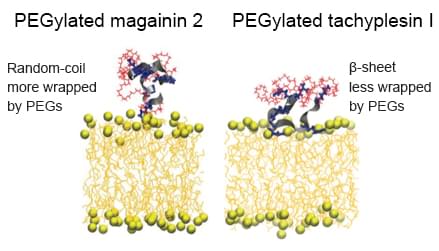 3) Administration approaches change
The majority of recombinant protein drugs are injectable or intravenous. But some diseases, such as diabetes, renal failure anemia, etc. require long-term use of drugs, injection or intravenous approach is very inconvenient. So there is a lot of experimentation going on improving administration approaches, for example, pharmaceutical spray. In this process, the biggest technical difficulty is the dose accuracy and drug stability.