Signal pathway refers to the phenomenon that when a certain reaction takes place in a cell, the signal transmits a kind of information from the outside of the cell to the inside of the cell, and the cell responds based on this information. The introduction of the signal pathway can be traced back to 1972, but it was called signal transmission at that time. In 1980, M. Rodbell mentioned signal transduction in a review, and the concept has been widely used ever since. Signal pathway refers to a series of enzymatic reaction pathways that can transfer molecular signals outside the cell into the cell through the cell membrane to exert effects. These extracellular molecular signals (called ligands) include hormones, growth factors, cytokines, neurotransmitters, and other small molecule compounds.

NF-kB (nuclear factor-kappa B) is a transcription factor found from the nuclear extract of B lymphocytes in 1986. It can specifically bind to the enhancer B sequence GGGACTTTCC of the immunoglobulin kappa light chain gene and promote κ light chain gene is expressed. It is a member of the Rel family of eukaryotic transcription factors and is widely present in various mammalian cells. So far, five types of NF-kB/Rel family members have been found in mammalian cells. They are RelA (ie p65), RelB, C-Rel, p50/NF-kB1 (ie p50/RelA), and p52/NF. -kB2. Each of these members has a Rel homology domain (RHD) of about 300 amino acids. This highly conserved domain mediates the formation of homo or heterodimers of the Rel protein, and this domain is also the specific binding region of NF-kB to the target gene DNA sequence. The activation process of intracellular NF-kB is finely regulated. Normally, NF-kB in the cytoplasm is in an inactive state and combines with an inhibitor protein of NF-kB to form a trimer complex. When TNF-a signal, inflammatory factors, LPS, UV and other external stimuli appear, cytokines bind to TNF receptors on the surface of cell membranes, TNF receptors multimerize and interact with TRADD molecules in the cytoplasm. 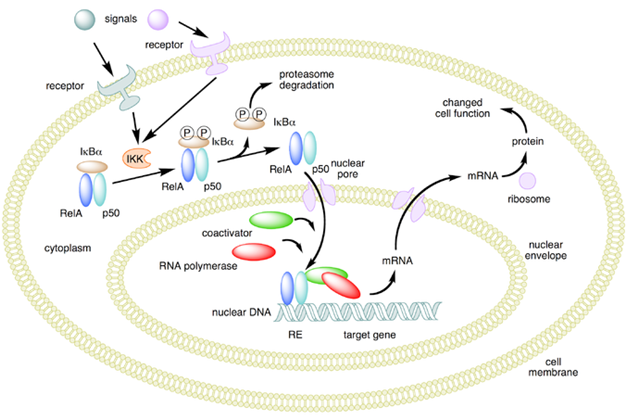 The JAK-STAT signal pathway is a cytokine-stimulated signal transduction pathway discovered in recent years. It is involved in many important biological processes such as cell proliferation, differentiation, apoptosis, and immune regulation. Compared with other signaling pathways, the transmission process of this signaling pathway is relatively simple. It is mainly composed of three components, namely the tyrosine kinase-related receptor, the tyrosine kinase JAK, and the transcription factor STAT.

Compared with other signal pathways, the transmission process of JAK-STAT signal pathway is relatively simple. The signal transmission process is as follows: The binding of cytokines to the corresponding receptor causes the dimerization of the receptor molecule, which makes the receptor-coupled JAK kinases approach each other and are activated by interactive tyrosine phosphorylation. After JAK activation, tyrosine residues on the catalytic receptor undergo phosphorylation, and these phosphorylated tyrosine sites form a "docking site" with the surrounding amino acid sequence. STAT proteins were recruited to this "berthing site". Finally, the kinase JAK catalyzes the phosphorylation of the STAT protein bound to the receptor, and the activated STAT protein enters the nucleus as a dimer to bind to the target gene and regulate gene transcription. It is worth mentioning that one JAK kinase can participate in the signal transduction process of multiple cytokines, and one cytokine signal pathway can also activate multiple STAT kinases, but cytokines have certain choices for activated STAT molecules. Sex. For example, IL-4 activates STAT6, while IL-12 specifically activates STAT4. 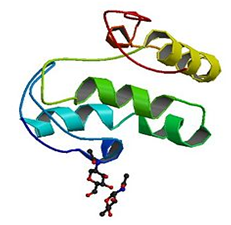 Figure 4. Crystal protein structure of Wnt8 and the cysteine-rich domain of Frizzled 8.

BMP (bone morphogenetic protein) is an important member of the TGF-β (transforming growth factor-β) superfamily. By regulating the activity of a series of downstream genes, it controls many important biological processes such as mesoderm formation, nervous system differentiation, tooth and bone development, and cancer development. The BMP signal is transmitted through the ligand BMP specifically binding to the serine/threonine kinase receptor (BMPR) on the cell membrane to form a ligand receptor binary complex. At the same time, type II receptor (BMPR2) can activate type I receptor (BMPR1) and further transmit signals to Smad molecules in the cell. The Smad protein plays a key role in transmitting BMP and TGF-β signals from the cell membrane to the nucleus. 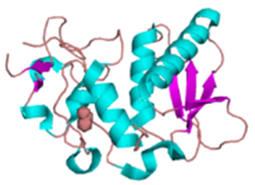