The immune system is made up of a network of cells, tissues, and organs that work together to protect the body from harmful things like germs, viruses, and diseases like cancer. To function properly, an immune system must detect a wide variety of agents, known as pathogens, from viruses to parasitic worms, and distinguish them from the organism's own healthy tissue. After first finding a foreign substance, the immune system takes action to destroy foreign substances and abnormal cells, including cancer cells. 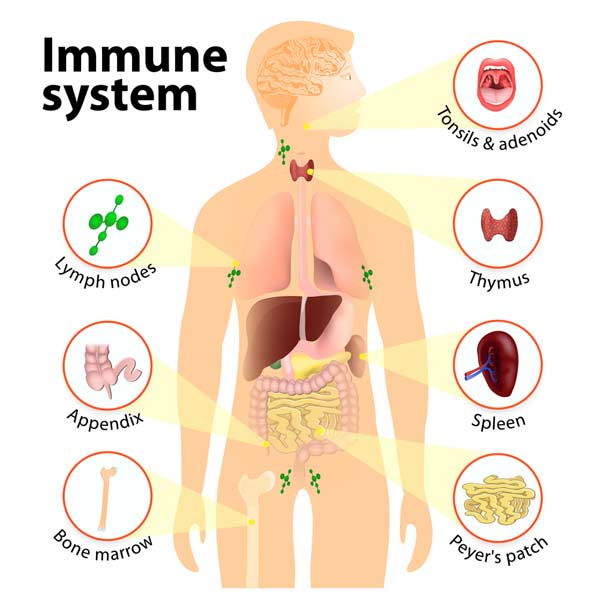 There are two main parts of the immune system:

Immuno-oncology is an innovative area that utilizes the body’s own immune system to fight cancer by modifying it to recognize the tumor as a foreign substance to the body that needs to be attacked. Compared with current treatments for cancer, such as surgery, chemotherapy, and radiation, immuno-oncology allows cancer cells to be targeted, leaving the rest of the cells unharmed. It also has fewer limitations on the stages of cancer that can be targeted.

There are several immuno-oncology treatments that are currently available, such as immune cell therapy (CAR-T), cytokines, monoclonal antibodies, cancer vaccines, and checkpoint inhibitors. Below is a diagram showing the immune checkpoint proteins and their inhibitor drugs.

Immune checkpoints are regulators of immune activation. They play a key role in maintaining immune homeostasis and preventing autoimmunity. In cancer, to eradicate tumor cells and induce antitumor immunity, T cells are able to recognize tumor antigens presented to T cell receptors (TCRs) by antigen-presenting cells (APCs). After binding to TCR, a second signal (signal two, also called costimulatory signal) is needed for T cell activation. The costimulatory signal comes from the binding of the CD28 molecule on T cells with its ligand, B-7 molecules (CD80 and CD86) on APCs. After CD28 binds to its ligand, the B7 protein, on the surface of APCs, T cell proliferation is activated to enhance immunity. Cytotoxic T lymphocyte antigen-4 (CTLA-4) and programmed death-1 (PD-1) transmit inhibitory signals when bound to their ligands, B7-1/B7-2, and PD-L1 (B7-H1)/PD-L2 (B7-DC), respectively, on APCs or tumors. Such protein molecules involved in immune regulation are referred to as immune checkpoints.

As mentioned before, tumor cells can exploit the inhibitory mechanism and evade the host antitumor activity by suppressing the proliferation of immune cells, subsequently survive, and continue to proliferate. 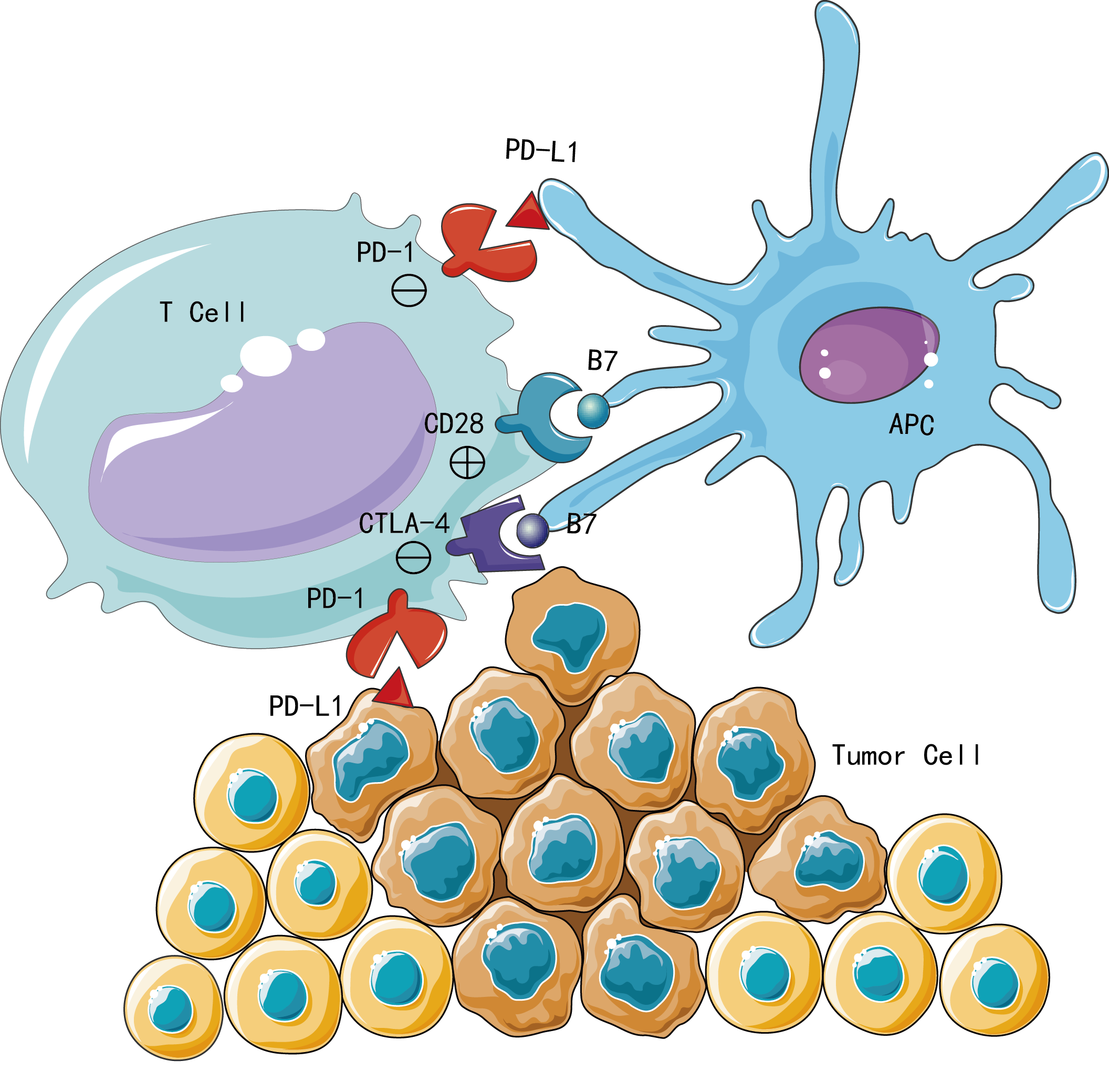 Cytotoxic T Lymphocyte antigen 4 (CTLA-4) (CD152) and CD28 are homologous receptors expressed by both CD4+ and CD8+ T cells, which mediate opposing functions in T cell activation. Both receptors share a pair of ligands expressed on the surface of antigen-presenting cells (APCs). 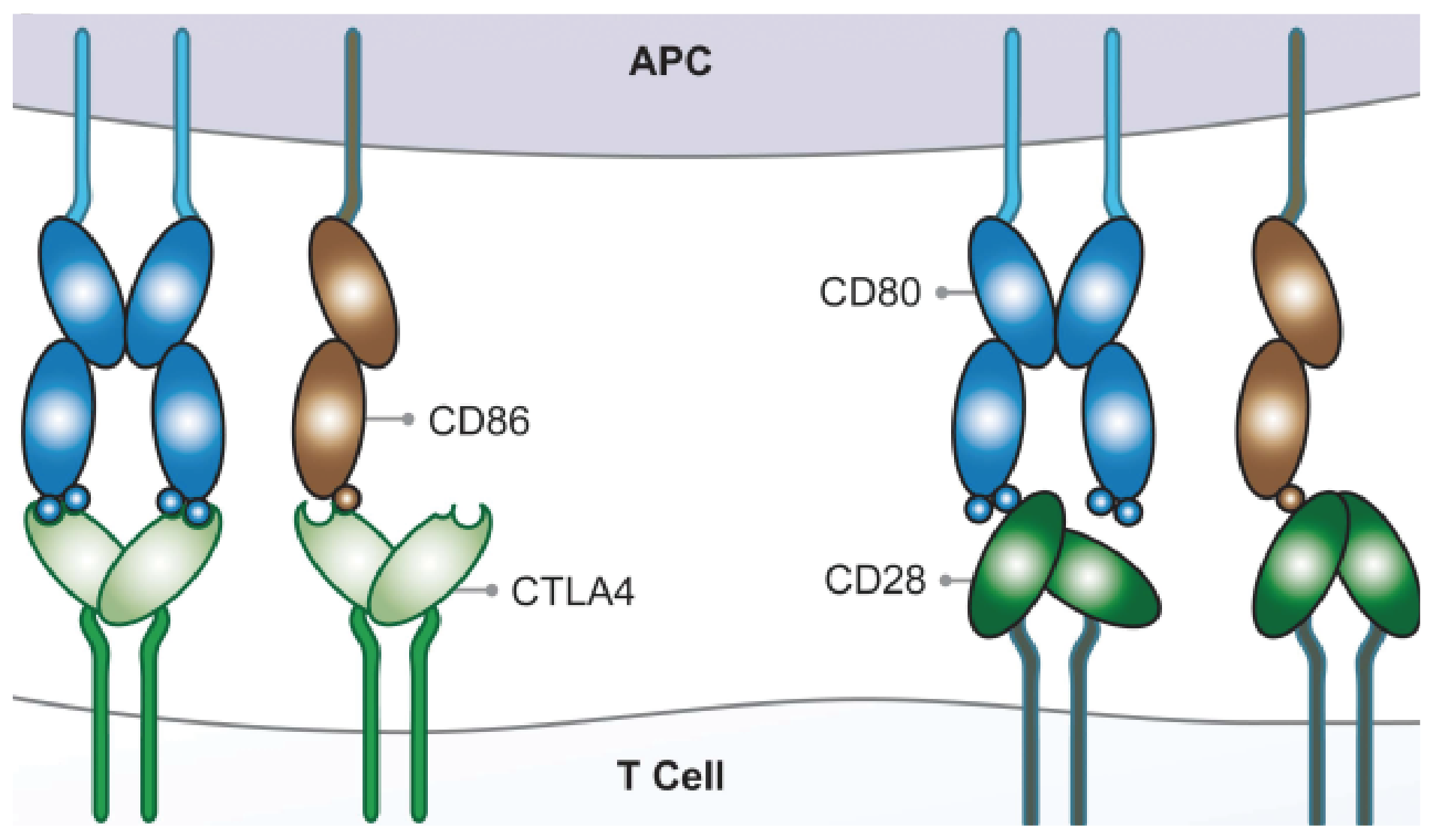 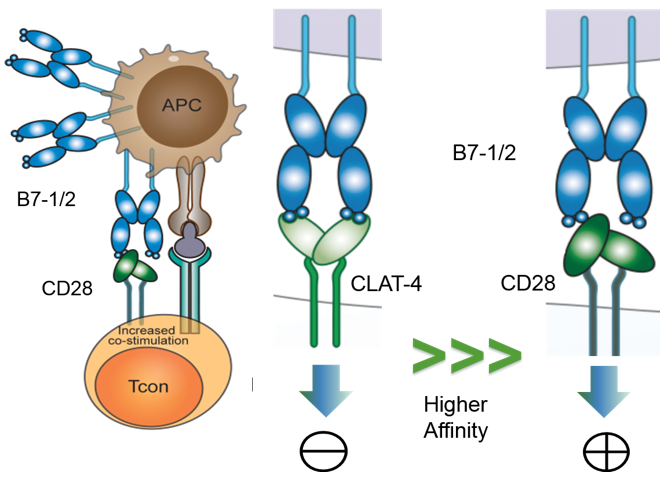 A number of different models have been proposed to explain the mechanism in the function of CTLA-4. The simplest of these involves competition between CD28 and CTLA-4 for ligand binding, which has been proposed alongside other cell-intrinsic inhibitory signaling models. CTLA-4 has a higher binding affinity for B-7 ligands than CD28, which binds these B7 proteins with an approximately 20 times greater affinity and can, therefore, outcompete CD28 for binding, leading to attenuation and termination of T cell responses and establishment of tolerance, to minimize the development of autoimmunity. 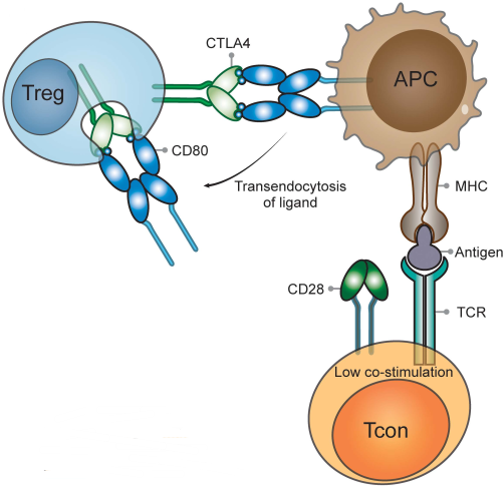 While CD28 is constitutively expressed on the plasma membrane and co-stimulates T cells, CTLA-4 is predominantly found in intracellular vesicles in FoxP3+ Treg cells or activated conventional T cells. This localization is due to the constitutive endocytosis of CTLA-4 from the plasma membrane and results in approximately 90% of CTLA-4 being intracellular. One molecular mechanism that is consistent with a dominant cell-extrinsic role for CTLA-4 is the physical capture of CD80 and CD86, and their subsequent removal from APCs: a process known as trans-endocytosis.

The concept of using immune checkpoint inhibitors to break T cell dysfunction in tumor patients appears to be an intriguing approach to cancer therapy. This was first demonstrated by the success of Ipilimumab, an antiCTLA-4 mAb, resulting in the approval of Ipilimumab by the FDA for advanced melanoma.

Initially, PD-1 was demonstrated to be a receptor for cell death; however, the PD-1 pathway was later found to play a regulatory role in inhibiting T cell activation and restraining T cell function. In contrast to CTLA-4, PD-1 predominantly regulates effector T cell activity within tissues and tumors as opposed to regulating T cell activation in lymphoid organs. While CTLA-4 mainly affects naïve T cells, PD-1 is primarily expressed on mature T cells in peripheral tissues and the tumor microenvironment. It is also expressed on other non-T cell subsets including B cells, professional APCs, and natural killer (NK) cells.

PD-L1 and PD-L2 (also referred to as B7-H1 and B7-DC, respectively) are both type I transmembrane proteins. Though PD-L1 is expressed infrequently in normal human tissues outside of the placenta and macrophage-like cells, its expression is upregulated by IFN-γ and other cytokines that are released by activated T cells. In contrast to the positive costimulatory signal delivered by CD28 receptors, PD-1 delivers a negative signal when bound to its ligands, PD-L1, and PD-L2. PD-1 suppresses T cell activation through the recruitment of phosphatase SHP-2 and the subsequent inactivation of Zap 70, which plays a critical role in T-cell receptor signaling. 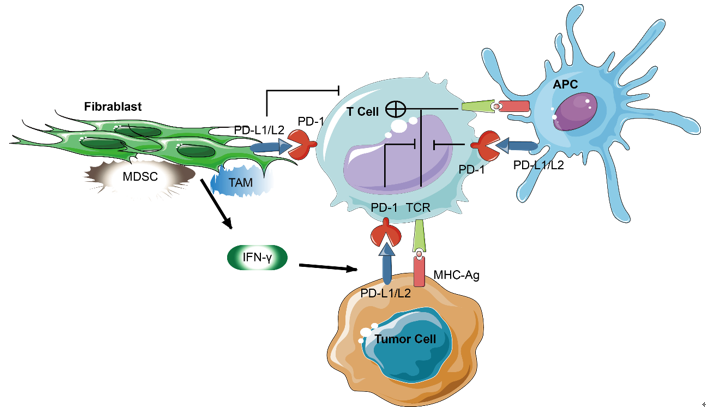 Cells from many different human tumors can evade host immune surveillance by expressing PD-L1 on their surface. Expression of this immune-checkpoint ligand by tumor cells is thought to be induced by an antitumor immune response. Tumor-infiltrating lymphocytes (TILs) recognize tumor antigens presented by tumor cells, tumor stromal cells, and APCs, and subsequently release IFN-γ to induce PD-L1 expression in these cells, resulting in an adaptive immune resistance microenvironment.

Given the expression of PD-1 on TILs and the upregulation of PD-1 ligands on tumor cells, an anti-tumor host immune response has the foundation. Antibody blockade of PD-1 and its ligands leading to enhanced antitumor immunity in mouse models shows that targeting PD-1 and other immune checkpoints is able to reverse this dysfunctional state and reinvigorate T cell activity in chronic viral infections and cancer. 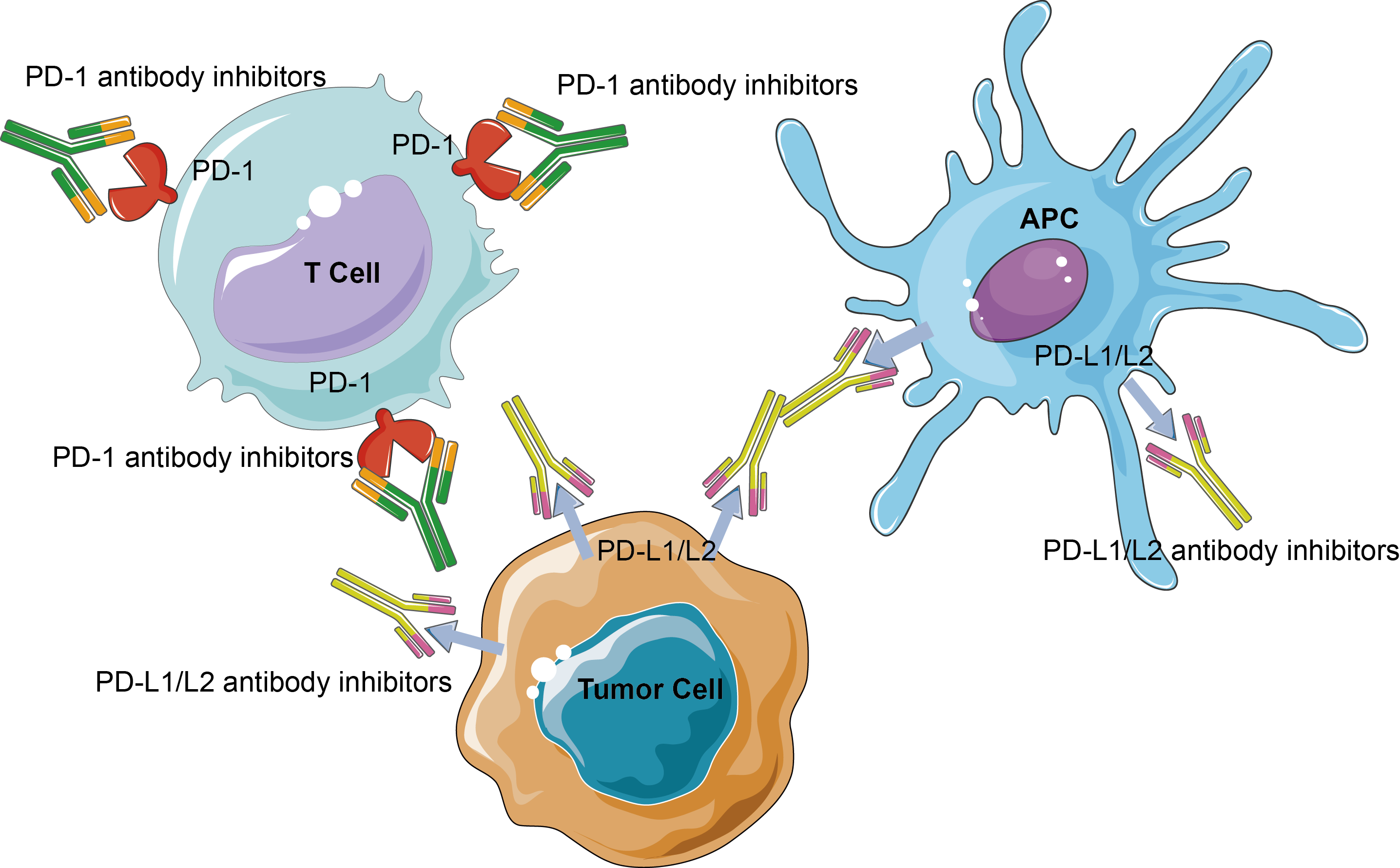 Immune checkpoint blockade is game-changing and revolutionary in at least two senses. First, the target for therapy is on immune cells but not tumor cells. Second, the approach is not to attack tumor-specific antigens but to remove an inhibitory pathway.

Recent studies demonstrated that immune checkpoint inhibitors are able to induce durable, long-lasting cancer control. These inhibitors have shown promising efficacy in melanoma, renal cell carcinoma, NSCLC, and bladder UC. As in the case with immunotherapy for other types of cancers, these drugs show a limited response rate, but the efficacy in achieving long-lasting benefits for some patients has changed the paradigm of cancer treatment.

However, we also need to notice that immunotherapy, helping to prompt an “immune response”, can attack healthy cells as well as cancer cells, certain side effects may be experienced, including digestive tract symptoms, loss of appetite, fatigue, and flu-like symptoms.