JAK-STAT signal pathway is a cytokine-stimulated signal transduction pathway found in recent years. It is involved in many important biological processes such as cell proliferation, differentiation, apoptosis and immune regulation. Compared with other signaling, the JAK-STAT signal pathway is relatively simple. It consists of three major components: receptor tyrosine kinase (RTK), Janus kinase (JAK) and signal transducer and activator of transcription (STAT).

Many cytokines and growth factors signal through the JAK-STAT signal pathway, including interleukin 2/7 (IL-2/IL-7), granulocyte/macrophage colony stimulating factors (GM-CSF), growth hormones (GH), epidermal growth factors (EGF), platelet-derived growth factors (PDGF), interferons (IFN) and so on (Figure 1). These cytokines and growth factors have corresponding receptors on the cell membrane. These receptors belong to the cytokine receptor superfamily and can be classified into two groups: Type I, the extracellular portion contains four conserved cysteines and one WSXWS unit at the C-terminal. Type II, the N-terminal and C-terminal of the extracellular part have a few pairs of cysteine, respectively. A common feature of these RTKs is that they does not have kinase activity, but the intracellular domain has a binding site for the tyrosine kinase JAK. After binding to the ligands, receptors activate JAK. Tyrosine residues of various target proteins are phosphorylated by activation of JAK to effect signal transduction from the extracellular to the intracellular. 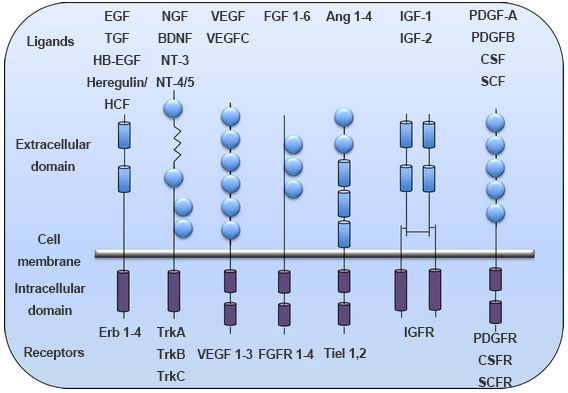 The structure and function studies of RTKs showed no obvious homology. There is only a homologous region in the cytoplasmic near membrane region, which was a functional segment that bound to JAK. This homology region usually consists of two structures that are highly conserved among various receptors, one of which is the prolyl-rich "box1" and the other is the "box2" near the cell membrane, which are the most important structure that determines the mutual coupling between a cytokine receptor and a JAK kinase. The dimerization of receptors can be homologous or heterologous. In the dimerization of homologous receptor, only JAK2 is activated. In contrast, heterodimers consisting of different subunits activate a wide range of JAKs. Once activated, JAKs phosphorylate receptor subunits and other substrates.

Many tyrosine kinases are cell membrane receptors, collectively referred to as RTKs, whereas JAKs are a class of non-transmembrane tyrosine kinases that have only catalytic domains but no Src homology 2 (SH2) domain. JAK is an acronym for Janus kinase. In Roman mythology, Janus is the god in charge of the beginning and the end. It is called a Janus kinase because JAK phosphorylates both the cytokine receptors and multiple signaling molecules containing SH2 domain.

The JAK protein family consists of four members: JAK1, JAK2, JAK3 and Tyk2, which have seven JAK homology (JH) domains. The JH1 domain is a kinase domain and the JH2 domain is a pseudo-kinase domain, JH6 and JH7 are receptor binding regions (Figure 2). For example, in JAK3, JH1 is the C-terminal tyrosine kinase domain. Adjacent to the kinase domain is the JH2, or pseudo-kinase domain, which itself lacks catalytic activity but is essential for regulating normal kinase activity. The amino terminus of the JAKs (JH5–JH7) has homology to the band four-point-one, ezrin, radixin, moesin (FERM)-domain containing proteins. This region of the JAKs mediates binding to cytokine receptors and also regulates catalytic activity. Mutations have been identified in all of these domains; most have considerable effects on the protein expression of JAKs, but some missense mutations or small in-frame deletions allow for some protein expression. These mutations affect kinase activity, receptor binding and intracellular transport.

STAT is called "signal transducer and activator of transcription." As its name implies, STATs play a key role in signal transduction and transcriptional activation. Since the first STAT protein STAT1 was purified in 1991, other members of the STAT protein family have also been cloned. Currently, six members of the STAT family have been found, STAT1, STAT2, STAT3, STAT4, STAT5, and STAT6. STAT proteins are structurally divided into the following functional segments: N-terminal conserved sequence, DNA binding domain, SH3 domain, SH2 domain and C-terminal transcriptional activation domain (Figure 3). Among them, the most conserved and functionally most significant sequence is the SH2 domain, which has the exact same core sequence "GTFLLRFSS" as the SH2 domain.

Compared with other signaling, JAK-STAT signal pathway is relatively simple. The signaling process is as follows: The binding of cytokines to the corresponding receptors results in the dimerization of the receptor, which brings the JAKs that are coupled to the receptors close to each other and are activated by interacting tyrosine phosphorylation. The tyrosine residues on the catalytic receptor undergo the phosphorylation modification after JAK activation. Then, these phosphorylated tyrosine sites form a "docking site" with the surrounding amino acid sequence. At the same time, the STAT protein containing SH2 domain is recruited to this "docking site". Finally, JAK catalyzes the phosphorylation of the STAT that binds to the receptor. The activated STAT protein enters the nucleus as a dimer and binds to the target gene, regulating gene transcription. It is worth mentioning that a JAK can participate in the signal transduction process of a variety of cytokines. One cytokine signaling pathway can also activate multiple JAKs, but cytokines have a certain choice of activated STATs. For example, IL-4 activates STAT6, whereas IL-12 specifically activates STAT4. 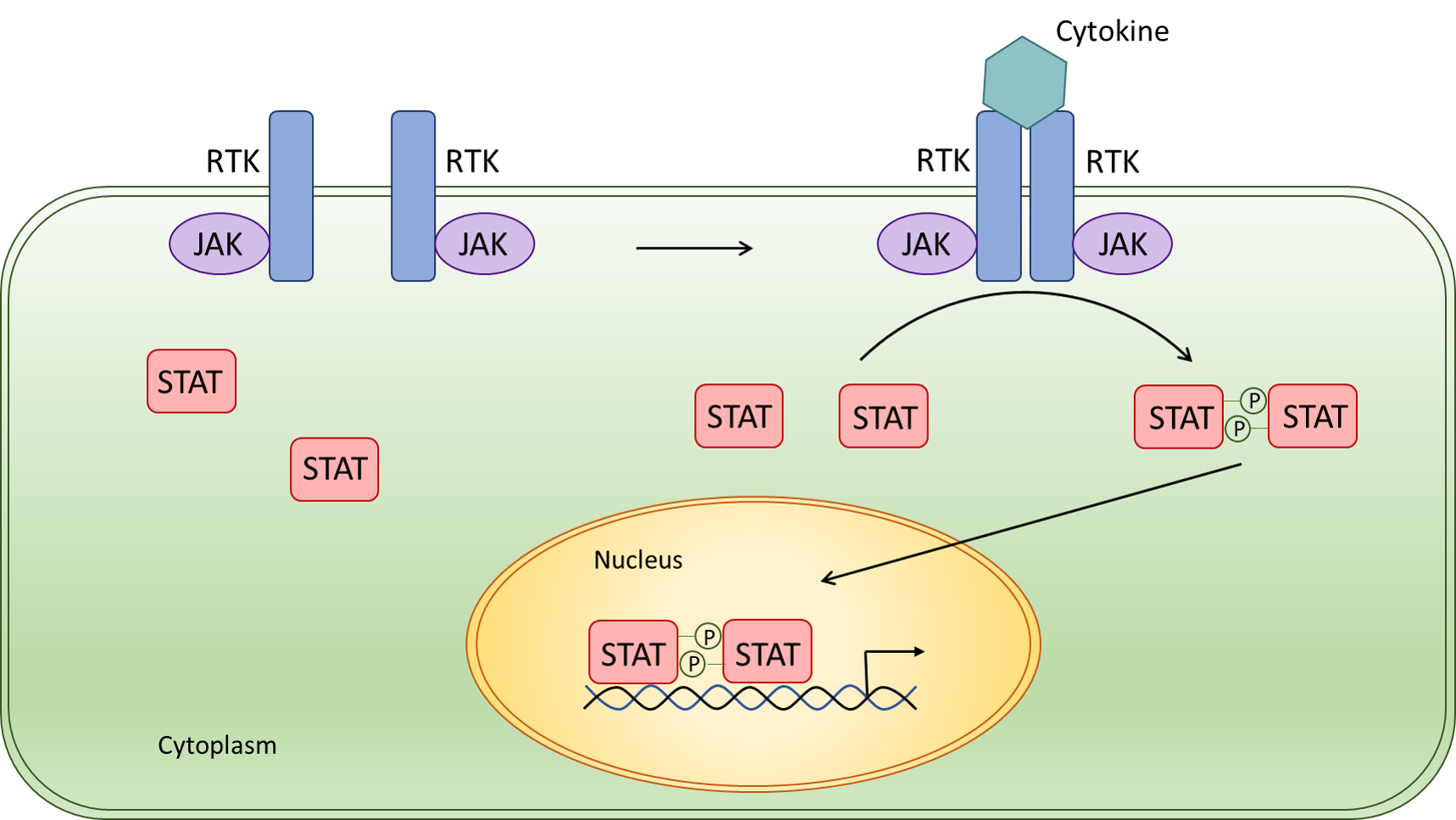 STAT is involved in the regulation of cell growth, differentiation and apoptosis. In normal physiological conditions, the activation of STATs is transient and tightly regulated. However, the persistent activation of STATs is found in many human tumors. The abnormal activation of STAT3 is found in almost all head and neck tumors. STAT3 also continues to be activated in various myelomas. Leukemia is a malignant disease of hematopoietic tissue, also known as "blood cancer." In leukemic cells, JAK-STAT signaling pathway is constantly activated, therefore, STAT protein has become one of the key detection indicators. For example, STAT1, STAT3 and STAT5 are the most common and persistent activators of leukemia. Different types of leukemia cells may manifest abnormal activation of one or more STAT proteins. For example, lymphocytic leukemia and monocystic leukemia cells are commonly activated by STAT5, while myeloid leukemia cells are activated continuously by STAT3.

Altogether, these findings suggest that targeting the aberrant JAK/STAT signaling in carcinoma may hold great potential as a novel therapeutic intervention for the treatment of patients with cancer; and that the drugs/inhibitors of JAK/STAT cascade currently in clinical trials for solid tumors and hematopoietic malignancies (Figure 5) should also be tested for their efficacy as therapeutics in carcinoma. 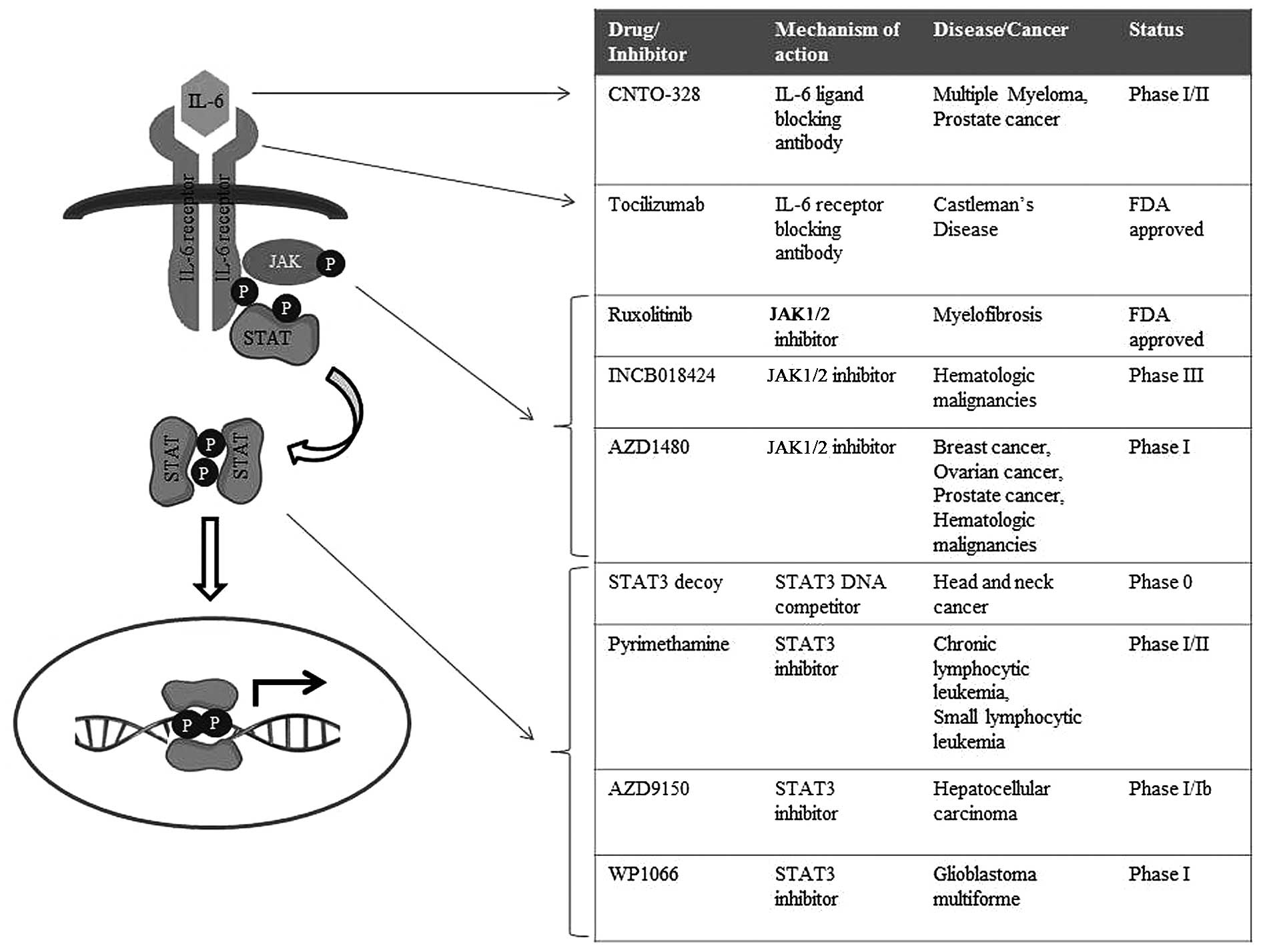 Although there is ample evidence that sustained activation of the JAK-STAT signal pathway is closely linked to diseases, the development of diseases is the result of multiple genetic anomalies that involve multiple steps. Therefore, we need further research to explore the detailed mechanism of JAK-STAT signal pathway. In addition, since the pathogenesis of JAK-STAT activation is closely linked, proteins such as JAK and STAT are likely to be the best drug targets for the treatment of these diseases. Designing specific inhibitors against these proteins will undoubtedly bring new hope for the treatment of the diseases. We believe that in-depth studies of cancer signal pathways and drug targets will open up broad prospects for human beings to eventually overcome cancer.