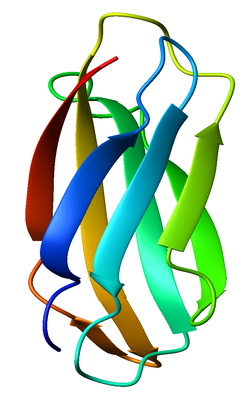 Tenascin-C is a founding member of the family. It was discovered in 1983 as a protein rich in glioma 1 and myotonic antigen 2. Tenasin C expression is highly regulated during development and in adults. Ordinary tenascin-C is expressed during transient organs, is absent or is greatly reduced in the most fully developed organs, but pathological conditions such as infection, inflammation, tumorigenesis or reappearance. 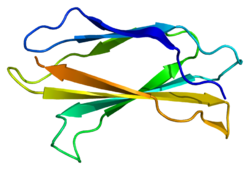 Tenascin-X was found in the human MHCIII affinity gene X10. Like tenascin C and tenascin R, tenascin X is very weak because it is a cell adhesion protein, and cells generally do not spread on the substrate of tenascin X11. The main parts of its expression are connective tissue in the heart and skeletal muscle and the dermal layer of the skin 12,13. The closest homologue of chicken tenascin-X is tenascin-Y, and judging from its sequence similarity and its similar expression pattern, it can be considered as an orthopaedic protein orthotenin-X 14,15. Tenascin-X and -Y are mainly separated as monomers, but may also form disulfide-linked oligomers15.

Tenascin-W is the latest member and has not been well identified. It was first described in the developing skeleton of zebrafish 16, and the corresponding human genes and putative human cDNA were annotated as a Tenascin-R-like gene in the DNA database (accession number AL049689). However, it has higher homology to zebrafish tenascin-W than any other tenascin, so it can be clearly identified as a human tenascin-W ortholog. 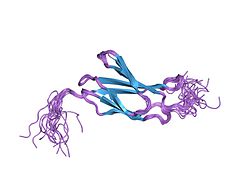 Tenascin is a large, modular ECM protein, so their interaction with cells is almost simple. Research reports published over the years on the role of tendin on various cultured cells are puzzling and often difficult to reconcile. However, it seems clear so far that often paradoxical effects are the true feature of this ECM protein family. Obviously, tendin is not a classic and universal adhesion protein, such as fibronectin. Instead, in the same experimental setup, tenascin can be adherent and migrating to one cell type and inhibiting to another cell type. Conversely, the effect of tendin on a single cell type may vary depending on how the cell is exposed to other ECM components. To give just one example, when we plated embryonic dorsal root ganglion explants on a patterned ECM matrix, sensory neurites easily cross the border between laminin and tenascin C stripes, their growth cone Still well spread and continued to move rapidly on tenascin C.

The role of tenascin C in inflammation

For many injuries and diseases, it is common to strongly induce tenascin-C in connective tissue that normally expresses connective tissue. The accumulation of this protein from scratch does not appear to be disease-specific, suggesting that its appearance may often be related to inflammation rather than the disease itself. This is true in most cases (but not always, as we will see here and in the following paragraphs). In normal human skin, expression of tenascin C is limited to the dermal-epidermal junction of germinating and endocrine glands, and the intima of larger blood vessels [. A variety of acute inflammation-stimulating stimuli induce tenascin C mRNA and protein anywhere in the upper dermis, without (even without) significant physical damage. For example, due to erythema caused by UVB, tenascin C increases rapidly and strongly under the epidermis; like wound healing 56, corticosteroid 57 inhibits this response. Similar results were obtained with gamma-ray irradiation, which is expected to cause tenosylin C (but not tenascin X) to upregulate the deeper appearance of skin and muscle. In hapten-induced allergic reactions leading to dermatitis, the synthesis and renewal of tenascin-C is highly increased during the acute inflammatory phase. When leukotriene-B4 is directly applied to human skin, tenascin-C will accumulate in the dermis and the influx of polymorphonuclear cells (PMN) is related to the invasion of T cells. In incisions or abrasions, the situation is more complicated: the inflamed granulation tissue is again rich in tenascin C, but the protein also appears in the epithelial layer as a result of direct interaction with the healing epidermis (ie, proliferating keratinocytes). This finding is related to observations of acne, psoriasis, and patients with vesicular disease. In this case, tenascin C is again strongly expressed in the dermal inflammation area. However, the first observable induction of the protein in the primary lesion occurred just below the hyperproliferative epidermis, ie before inflammation. This suggests that in some cases, the same tissue mediators that initially triggered inflammation may induce protein expression through autocrine or paracrine mechanisms, rather than indirect protein expression through leukocyte-derived cytokines.