The evolutionarily conserved hedgehog (Hh) pathway is essential for normal embryonic development and plays a vital role in the maintenance, regeneration and regeneration of adult tissues. The secreted Hh protein acts in a concentration- and time-dependent manner to trigger a range of cellular responses ranging from survival and proliferation to the designation and differentiation of cell fate. Proper Hh signalling levels require regulation of Hh ligand production, processing, secretion, and transport-in mammals, including sonic (Shh), India (Ihh), and desert (Dhh). All Hh ligands are synthesized as precursor proteins, which undergo autocatalytic cleavage at the carboxyl terminus and are accompanied by cholesterol modification, palmitoylation occurs at the amino terminus, thereby producing a secreted dilipid protein. Hh ligands are released from the cell surface through the combined action of Dispatched and Scube2, and then transported in multiple cells by interacting with the Glypican family of cell surface proteins LRP2 and heparan sulfate proteoglycans. 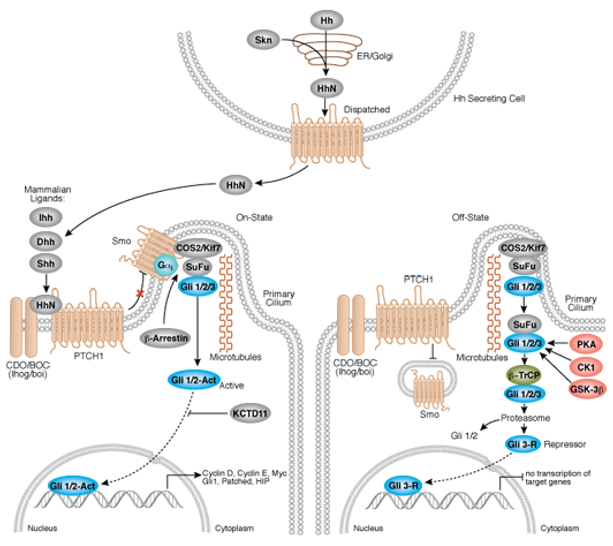 Hh protein initiates signaling by binding to the classical receptor Patched (PTCH1) and co-receptors GAS1, CDON and BOC. Binding of Hh to PTCH1 results in inhibition of GPCR-like protein smoothing (SMO), which causes SMO to accumulate in the cilia and phosphorylate the cytoplasmic tail. SMO mediates downstream signal transduction, including isolation of the GLI protein (transcription effector of the Hh pathway) from the kinesin family protein Kif7 and the key intracellular Hh pathway regulator SUFU. The GLI protein is also transported through the cilia and is isolated by SUFU and Kif7 in the absence of Hh signals, allowing PKA, GSK3β, and CK1 to phosphorylate GLI and then process it into transcriptional repressors (through carboxyl-terminal cleavage) or targeted degradation (E3 ubiquitin ligase β-TrCP). In response to the activation of Hh signaling, GLI proteins are differentially phosphorylated and processed into transcriptional activators, which induce the expression of Hh target genes, many of which are components of this pathway (such as PTCH1 and GLI1). Feedback mechanisms include induction of Hh pathway antagonists (PTCH1, PTCH2, and Hhip1) that interfere with Hh ligand function, and GLI protein degradation mediated by the E3 ubiquitin ligase adaptor adaptor protein SPOP. In addition to its important role in normal embryonic development and adult tissue homeostasis, abnormal Hh signaling has also caused more and more cancers, including classic basal cell carcinoma, neuroblastoma, and rhabdomyosarcoma. Recently, Hh signal overactivity has been linked to pancreatic cancer, lung cancer, prostate cancer, ovarian cancer, and breast cancer. Therefore, understanding the mechanisms that control the activity of the Hh pathway will help develop new therapies to treat an increasing number of Hh-driven diseases.

The most common way to target this pathway is to regulate SMO. Antagonists and agonists of SMO have been shown to influence downstream pathway regulation. The most clinically advanced SMO targeting agent is competitive with cyclopamine. Itraconazole (Sporanox) has also been shown to target SMOs through mechanisms other than cyclopamine and vismodegib. Itraconazole inhibits SMO in the case of mutations conferring resistance to vismodegib and other cyclopamine competitive antagonists such as IPI-926 and Novartis's LDE-225. Antibodies to PTCH and Gli3 (5E1) are also one way to regulate this pathway. Downstream effector and strong transcription activator siRNA Gli1 have been used to inhibit cell growth and promote apoptosis. Trisenox has also been shown to inhibit hedgehog signaling by interfering with Gli function and transcription. Several environmental modifiers of hedgehog signaling have been identified, which are potential health or developmental hazards. Dietary alkaloids found in tomatoes (tomophylline), potatoes (solanine), and eggplants (such as pepper and eggplant) (solazodine). Turmeric and turmeric (curcumin) have been shown to antagonize SMO and interfere with hedgehog signaling. In addition, certain environmental toxicants may prevent hedgehog signaling. Piperonyl butoxide (PBO) is a semi-synthetic pesticide additive developed in the 1940s and can be found in thousands of household and agricultural products. Despite its widespread use, the ability of PBO to suppress hedgehog signaling and act as an effective developmental teratogenic agent has not been recognized until recently.