Oxidative phosphorylation is a biochemical process that occurs in the mitochondrial inner membrane of eukaryotic cells or in the cytoplasm of prokaryotes. It is the coupling reaction between the energy released by a substance when it is oxidized in the body and the ADP and inorganic phosphate to synthesize ATP through the respiratory chain. Phosphorylation refers to the role of ATP generation in biological oxidation. There are two types of metabolite-linked phosphorylation and respiratory chain-linked phosphorylation. That is, there are two ways to generate ATP. One is that after the dehydrogenation of metabolites, the internal energy of the molecule is redistributed, so that the inorganic phosphate is first formed into a high-energy intermediate metabolite, which promotes ADP to ATP. This is called substrate-level phosphorylation. For example, glyceraldehyde 3-phosphate is oxidized to produce glyceric acid 1,3-diphosphate, which is then degraded to glyceric acid 3-phosphate. The other is the coupling of ATP generation during the electron transfer of the respiratory chain, which is oxidative phosphorylation. 95% of ATP in the organism comes from this way. 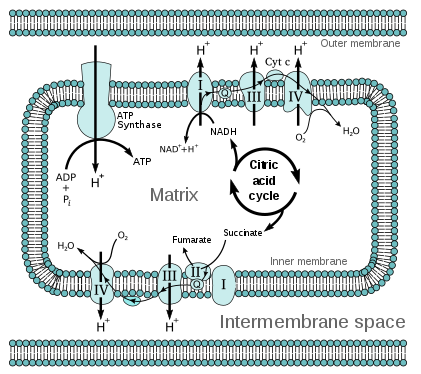 Figure 1. The electron transport chain in the cell is the site of oxidative phosphorylation in prokaryotes.

Oxidative phosphorylation refers to the energy released by the oxidative steps in the decomposition process of organic substances including sugars, lipids, amino acids, etc., and drives the process of ATP synthesis. In eukaryotic cells, oxidative phosphorylation occurs in mitochondria, and the systems involved in oxidation and phosphorylation are distributed in the form of complexes on the inner membrane of mitochondria, forming the respiratory chain, also called the electron transfer chain. Its function is to carry out electron transfer, H+ transfer and utilization of oxygen to generate H2O and ATP.

The electron transfer chain can carry protons and electrons, transfer electrons from the donor to the acceptor, and carry the protons between the membranes. These processes use soluble protein-binding transfer molecules. In mitochondria, electrons are transported by the water-soluble electron transfer protein cytochrome c in the membrane space. It transports electrons through the reduction and oxidation of an iron atom of the heme group in its structure. Cytochrome c is also found in the periplasmic space of some bacteria. 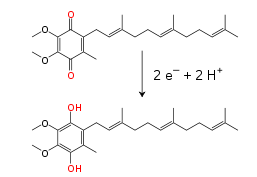 Figure 2. Reduction of coenzyme Q from its ubiquinone form (Q) to the reduced ubiquinol form (QH2).

NADH-Q reductase is the first protein in the electron transport chain. It is a huge enzyme, and in mammals the complex consists of 46 subunits. Only the detailed structure of a bacterial complex is known so far; most biological complexes resemble boots with a large "ball" that pass from the membrane to the mitochondria. Genes encoding a single protein are contained in both the nucleus and the mitochondrial genome, as is the case with many mitochondrial enzymes. 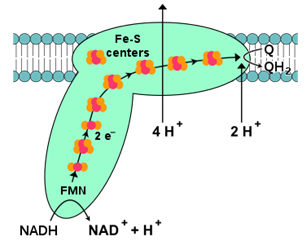 Figure 3. Complex I or NADH-Q oxidoreductase.

Succinate-Q oxidoreductase is the second entrance to the electron transport chain. It is special because it is the only enzyme that belongs to both the tricarboxylic acid cycle and the electron transport chain. Complex II contains four protein subunits, one attached flavin adenine dinucleotide (FAD) cofactor, iron-sulfur clusters, and one that is not involved in transferring electrons to coenzyme Q. It oxidizes succinic acid to fumaric acid and reduces ubiquinone. This reaction releases less energy than oxidized NADH, so complex II does not transport protons across the membrane and does not affect the proton gradient. 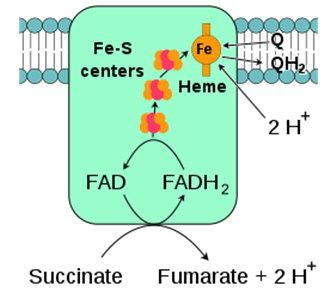 Electron transfer flavin protein-ubiquinone oxidoreductase (ETF-Q oxidoreductase, Figure 5), also known as "electron transfer-flavin protein dehydrogenase", is the third entrance of the electron transfer chain. It is an enzyme that accepts electrons from the mitochondrial matrix to transfer flavin proteins and uses these electrons to reduce ubiquinone. This enzyme contains a flavin and a [4Fe-4S] cluster, but unlike other respiratory chain complexes, it only attaches to the surface of the membrane and does not cross the lipid bilayer. In mammals, this metabolic pathway is important in beta oxidation of fatty acids and catabolism of amino acids and choline because it accepts electrons from multiple acetyl-CoA dehydrogenases. In plants, ETF-Q oxidoreductase is also important for metabolic responses that allow plants to survive long periods of darkness. 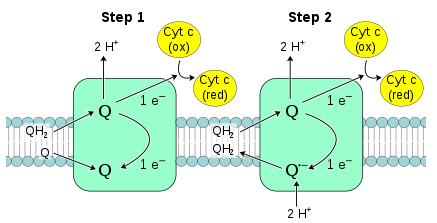 Q-cytochrome c oxidoreductase in mammals, this enzyme is a dimer, each subunit contains 11 protein subunits, 1 [2Fe-2S] iron-sulfur cluster and 3 cytochromes: 1 Cytochrome c1 and 2 cytochrome b. Cytochrome is a protein that transports electrons and contains at least one heme group. When electrons are transferred through the protein, the iron atom in the heme group in complex III switches between reduced divalent iron (+2) and oxidized trivalent iron (+3). The reaction catalyzed by complex III is the oxidation of one molecule of ubiquitin and the reduction of two molecules of cytochrome c, and the heme protein part is related to mitochondria. Unlike Coenzyme Q, which carries two electrons, cytochrome c carries only one electron.

Figure 6. The two electron transfer steps in complex III: Q-cytochrome c oxidoreductase. After each step, Q (in the upper part of the figure) leaves the enzyme.

The rate of oxidative phosphorylation in normal organisms is mainly regulated by the level of ADP. Only when ADP is phosphorylated to form ATP, electrons flow to oxygen through the respiratory chain. If ADP is provided, as the concentration of ADP decreases, electron transfer proceeds and ATP is synthesized, but the electron transfer slows as the concentration of ADP decreases. This process is called breathing control, which ensures that electron flow occurs only when ATP synthesis is needed.