Tumor protein p53, known as p53, is any isoform of a protein encoded by homologous genes in various organisms, such as TP53 (humans) and Trp53 (mice). The p53 signal pathway is crucial in multicellular organisms, where it prevents cancer formation, thus, functions as a tumor suppressor.

Vertebrates typically have three p53-family members (p53, p63, and p73) that evolved from a p63/p73-like common ancestor via two gene duplications and subsequent diversification [1,2]. There is some functional overlap between the three paralogs, but they also have distinct functions. Although p53 is best known for its tumor suppressor function, the main roles of p63 and p73 are in development and differentiation [3]. In humans, the TP53 gene is located on the short arm of chromosome 17 (17p13.1). Human p53 is active as a homotetramer of 4×393 amino acids with a complex domain organization, consisting of an intrinsically disordered N-terminal transactivation domain (TAD), a proline (Pro)-rich region, a structured DNA-binding domain (DBD) and tetramerization domain connected via a flexible linker, and an intrinsically disordered C-terminal regulatory domain [4]. Cellular p53 protein levels in vertebrates are under the strict control of its negative regulators MDM2 and MDMX (also known as MDM4). MDM2 is a transcriptional target of p53 and acts as an E3 ubiquitin ligase, which, together with its homolog MDMX, ubiquitinates p53, resulting in nuclear export and proteasomal degradation of p53 [5].

The tetrameric transcription factor p53 is activated upon cellular stress through multiple phosphorylation events. Depending on the type of stress, this activation results in upregulation or repression of genes involved in cell-cycle arrest, DNA repair, apoptosis, and senescence. In addition to these canonical p53 functions, many other p53 target genes have been identified that have important roles in autophagy, anti-angiogenesis, protection against oxidative stress, the regulation of metabolic homeostasis, and stem cell maintenance. [6] In unstressed cells, p53 protein levels are tightly regulated via a negative-feedback loop, whereby p53 induces the transcription of its own negative regulator, MDM2. In conjunction with its homolog MDMX, MDM2 ubiquitinates p53, resulting in nuclear export and proteasomal degradation of p53. [7] 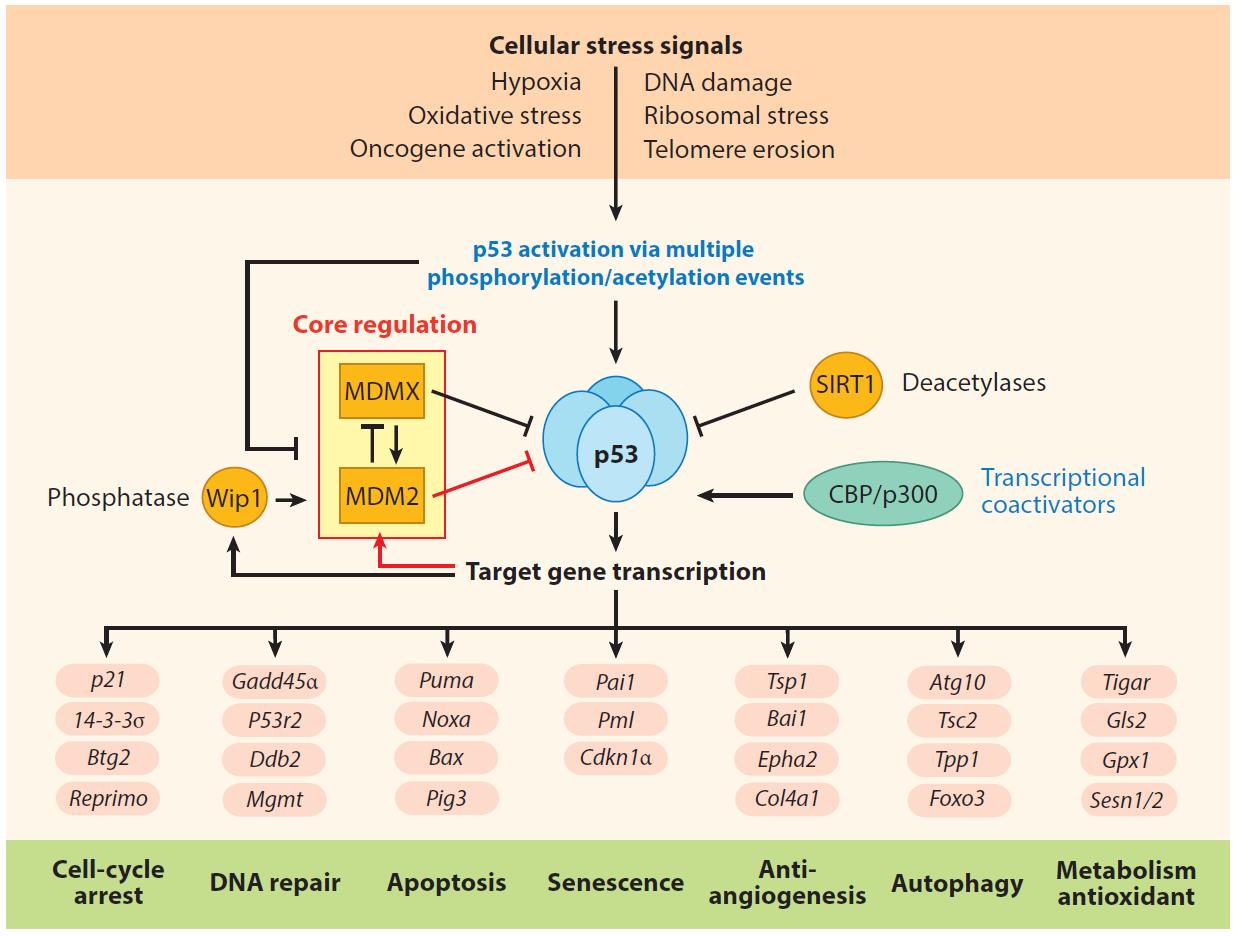 The transcription factor p53 plays a central part in the cell cycle and is arguably the most important tumor suppressor [8]. Upon cellular stress signals, such as DNA damage or oncogenic stress, p53 is activated through a cascade of phosphorylation events and other posttranslational modifications (PTMs), resulting in the expression of p53 target genes involved in cell-cycle arrest, DNA repair, or apoptosis, if the damage is irreparable (Figure 1). The p53 target genes also have important roles in senescence, angiogenesis, and autophagy, connecting, for example, p53 and mammalian target of rapamycin (mTOR) signaling. Over the years, countless studies on p53 have increasingly revealed the complexity and connectivity of the p53 pathway, which extends to roles in metabolic regulation, development, and stem cell biology [6,9]. More importantly, the aberrant regulation of p53 is seriously relevant to cancers. Studies showed that in 50% or more of human cancer types, p53 is directly inactivated by mutation. And the prevalence of p53 mutation varies significantly by cancer type and also depends on the developmental stage of a tumor. [10]