There are many different calcium binding proteins with different cell and tissue distributions and participation in specific functions. Calcium binding proteins are also important physiological roles of cells. The most prevalent Ca2+ sensitive protein found in all eukaryotes including yeast is calmodulin. Intracellular storage and release of Ca2+ from the sarcoplasmic reticulum are associated with the high-capacity, low-affinity calcium-binding protein calsequestrin. Calretinin is another calcium binding protein weighing 29kD. It is involved in cell signaling and is shown to be present in neurons. This type of protein is also abundantly present in malignant mesothelial cells, which can be easily distinguished from cancer. This differentiation was later applied to the diagnosis of ovarian stromal tumors. In addition, another member of the EF-hand superfamily is the S100B protein, which regulates p53. P53 is called a tumor suppressor protein and in this case acts as a transcriptional activator or inhibitor of many genes. S100B proteins are abundantly present in cancerous tumor cells, causing them to be overexpressed, thus making these proteins useful for classifying tumors. Furthermore, this explains why this protein readily interacts with p53 when transcriptional regulation occurs.

Calmodulin. CaM is a 17 kDa CaBP that is a Ca2+ sensor and second messenger and is highly selective to Ca2+. Each CaM protein contains four EF-hand motifs and thus four Ca2+ binding sites, two high affinity sites (Kd < 10-5 M) and two lower affinity sites (Ka = 10-4 to 10-5 M). CaM is not active by itself; it requires the binding of Ca2+ to form the Ca2+-CaM complex. At rest, the binding sites on CaM are unoccupied by Ca2+, but may be occupied by Mg2+. Once the cell is stimulated and intracellular levels of Ca2+ rise, the Mg2+ is removed and Ca2+ binds to the four binding sites. The binding of Ca2++ to CaM results in a conformation change of the protein, becoming more helical and compact. The influx of Ca2+ into the cell and binding to CaM triggers various pumps, buffers, and channels that regulate the levels of Ca2+ within the cell. Thus, a disruption in the CaM system, through loss of CaM, change in affinity of CaM, or loss in effectiveness of CaM, could lead to disruption in Ca2+ homeostasis. 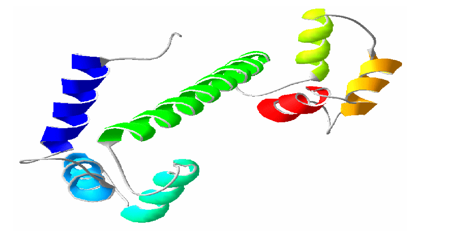 Aequorin. Aequorin is a 21 -22 kDa CaBP found in the jellyfish Aequorea victoria and contains three EF-hand Ca2+-binding sites. The protein contains 189 amino acids. In the presence of Ca2+, aequorin emits a blue light, and the light emmision is proportional to the amount of Ca2+ bound, with maximal light emission when two calcium ions are bound. Aequorin is then converted into a blue fluorescent protein, which dissociates into two components, apoaequorin and a chromophore consisting of coelenterazine and molecular oxygen. The apoaequorin component contains the EF-hands that bind Ca2+, while the coelenterazine component provides the fluorescence. The sensitivity of aequorin to Ca2+ depends upon the available Ca2+ and other cations (for example, Sr2+, Pb2+, and Mg2+). While only certain cations (for example, Ca2+ and Sr2+) will result in light emission, other cations (for example, Mg2+) do not fluoresce in the presence of aequorin but will compete for the binding sites. Aequorin is classically used in the lab as an autofluorescent indicator of Ca2+, but no one to date has examined its possible therapeutic value as a Ca2+ chelator.

Calbindin. Calbindin D-28k (CB) is a 30 kDa EF-hand CaBP. CB was first observed in the chicken intestine as a protein induced by Vitamin D. CB contains 261 amino acids and has six EF-hand domains and thus six Ca2+ binding sites. However, on two of the binding sites (EF-hands 2 and 6) some of the amino acids required for the coordination of Ca2+ binding have lost their Ca2+-binding ability, leaving only four intact Ca2+ binding sites. Of the remaining four functional binding sites, EF-hand 1 has a very high affinity for Ca2+, EFhands 4 and 5 have high affinity for Ca2+, and EF-hand 3 has the lowest affinity; however, the affinity constants of each site are fairly similar, Kd = 10-8 to 10-6.