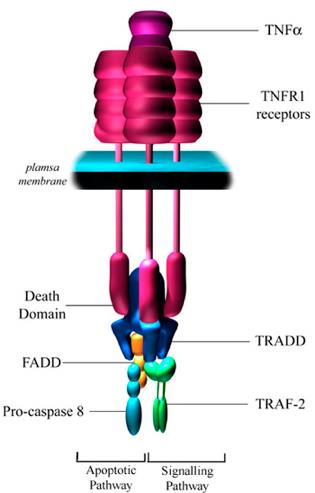 Tumor necrosis factor (TNF) superfamily composes of a group of cytokines and their receptors which can reduce cell death (apoptosis). This superfamily is composed of 19 ligands and 29 receptors in humans. TNFα and Lymphotoxin-alpha (LTα) is first identified members of the family.

TNF is a pro-inflammatory cytokine that was identified over 4 decades ago as the factor induced by lipopolysaccharide (LPS) that causes apoptosis and necrosis (cell death) of several cancer cell lines and the regression of some cancers in experimental animal models. The factor was isolated as a 17 kDa polypeptide that in its active state is a homotrimer. TNF is important for immunity and inflammation, and is part of the host response to bacteria, viruses and cancers. Local increases of TNF around sites of injury induce cardinal signs of inflammation, which include heat, swelling, pain and redness. Initially used to treat cancers, in some systems TNF can promote tumor progression. While there are many problems associated with systemic high dose treatment with TNF, recent evidence has demonstrated that local administration in conjunction with interferon γ (IFNγ), promotes the regression of adenomas and melanomas in patients due to apoptosis of the angiogenic endothelium.

TNF has also been called cachectin and differentiating factor (DIF) due to its role in chronic wasting disease and its ability to promote differentiation in some hematopoetic cells. Since its discovery, more than 20 homologues of TNF have been identified with 15-20% identity between family members, all of which have affects upon the immune system. Thus, there is a TNF superfamily composed of related proteins.

TNF promotes the apoptosis, programmed cell death, or necrosis of certain cancer cell lines in pM concentrations. Apoptosis and necrosis is induced by TNF activation of pro-death pathways. TNF can induce the hemorrhagic necrosis of tumors in organisms by synergizing with vascular endothelial growth factor (VEGF), to increase procoagulant activity in blood vessels leading to thrombosis. But systemic administration of high dose TNF induces septic shock and death, due to systemic capillary leakage syndrome. Other effects of systemic high dose TNF are hypotension and liver toxicity. To understand how TNF induces cancer death or progression and its role in immunity, autoimmunity and inflammation require understanding its mechanism of action.

TNF is expressed as a 26 kDa membrane-bound precursor protein (membrane-bound TNF or mTNF) which can be cleaved by proteolytic activity of a metalloproteinase TNFa converting enzyme (TACE) and released as a 17 kDa subunit (soluble TNF or sTNF) to extracellular spaces, Both sTNF and mTNF are trimeric in their mature bioactive form. The wide range of TNF activities is explained by the presence of two types of TNF receptors on cell membranes: TNF receptor type 1 (TNFR1; also referred to as p55 or CD120a) and TNF receptor type 2 (TNFR2; also called p75 or CD120b), TNFR1 is constitutively expressed on almost all nucleated cell types, whereas TNFR2 is typically expressed on immune cells. While mTNF activates both TNF receptors, sTNF has been shown to predominantly stimulate TNFR1 and has limited signaling capacities on TNFR2. This difference has been attributed to the difference in the stability (half-life) of the ligand/receptor complexes. TNF recruits immune cells to sites of inflammation and increases ex

TNF is involved or implicated in many immunological disorders, as well as various disease states. TNF is a mediator of inflammation observed in patients with rheumatoid arthritis and inhibition of TNF with neutralizing antibodies can stop progression of the disease. TNF is involved in the inflammation observed during the onset of multiple sclerosis and type 1 diabetes. TNF induces the migration of various immune cells to the targeted areas, where they become activated. In cachexia, such as seen in AIDS and possibly cancer patients, TNF plays a key role in the reallocation of energy reserves, by promoting breakdown of muscle and fat. This is associated with concomitant expansion of the number of immune cells and the production of acute phase reactive proteins. TNF can also be produced by adipocytes and induces insulin resistance associated with type 2 diabetes by decreasing insulin signaling and abrogating glucose transport.

The TNF family of ligands and receptors has been targeted for use in combination with chemotherapeutic treatment in cancer therapy. Frequently cancer cells develop resistance to chemotherapy or irradiation through mutations in the p53 tumor suppressor gene, and death receptors are able to induced cell death through alternative signaling pathways. The cytokines, TNFα and Fas, have proven to be cytotoxic to a variety of cell types which requires that their clinical use be limited to local applications. Alternatively, TRAIL is capable of killing cancer cells, yet does not induce apoptosis in most normal human cell types. It will be important to characterize the susceptibility of ovarian granulosa cells to TRAIL induced cell death in an effort to determine the potential for this therapy to enhance the infertility and premature menopause that often accompanies chemotherapeutic treatments.