ADD1 is a universally expressed protein that is part of the cytoskeleton and can regulate ion transport. Adducins are a family of cytoskeletal proteins encoded by three genes (α, β, γ). Adducin is a heterodimeric protein composed of related subunits, which are produced by different genes but have similar structures. The α- and β-adducts include a protease-resistant N-terminal region and a protease-sensitive, hydrophilic C-terminal region. Universal expression of α- and γ-endoproteins. In contrast, β-adducin is expressed at high levels in the brain and hematopoietic tissues. ADD1 binds to Ca2+/calmodulin with high affinity and is a substrate for protein kinases A and C. Alternative splicing results in multiple variants encoding different subtypes; however, not all variants are fully described. ADD1 gene polymorphism is related to hypertension. 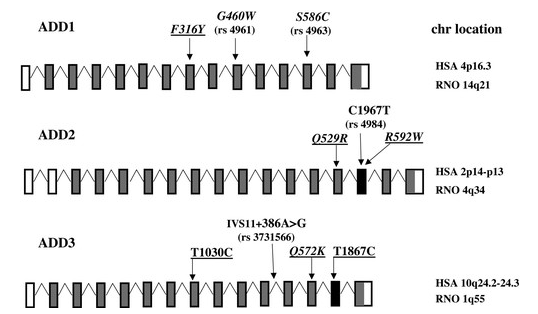 In a 1997 family contact study, it was found that the non-synonymous SNP Gly460Trp in the ADD1 gene encoding α-adducin is associated with sensitivity to changes in sodium balance. Compared with Gly / Gly homozygotes, patients with 460Try allele carriers had lower plasma renin activity and a greater response to BP reduction after two months of HCTZ treatment (mean arterial BP reduction was 15.9 versus 7.4 mmHg, p=0.001). Later studies used red blood cells as mirrors to transport in the cell membrane. It was reported that the Gly460Trp polymorphism may affect the treatment of Na by the kidney by changing the ion transport across the cell membrane. Later studies have confirmed the association between this polymorphism and BP's response to thiazide diuretics, but no other studies have been conducted. 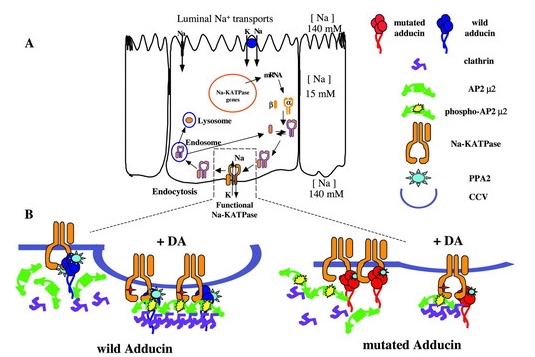 In most tissues involved in cardiovascular homeostasis (kidney, brain, heart, and blood vessels), adducin is expressed as a heteromeric protein composed of α- and γ-subunits. Therefore, this protein structure justifies the search for epistatic interactions between ADD1 and ADD3. ADD3 mutation epitope interaction and interaction ADD1 polymorphism and blood pressure level in F2 population. Administration of angiotensin II and other procedures to increase blood pressure will reduce the level of Add3 in the brain stem. Based on these findings, a hypothesis was proposed that the decrease in Add3 expression observed in SHR may be beneficial to or mediate an increase in the basic firing rate of neurons in cardiovascular regulatory brain regions. Like SHR, the expression of Add3 in the same brain region of MHS is also reduced. This suggests that the missensed Add3 mutation may be related to changes in protein expression and neuronal firing rate in MHS and SHR. The researchers also found that the epistatic interaction between ADD1 and ADD3 is related to pulse pressure.

Adducins are heteromeric proteins composed of different subunits called Adducin α, β and gamma. These three subunits are encoded by different genes and belong to the assembly of the spectrin-actin network in red blood cells and the membrane skeleton protein family at the cell-cell contact site in epithelial tissue. Although adducins α and γ are ubiquitous, the expression of adducin beta is limited to the brain and hematopoietic tissues. It was found that the originally purified Adducin from human erythrocytes was a heterodimer of Adducins α and β. The polymorphisms leading to amino acid substitutions in these two subunits are related to blood pressure regulation in animal models of hypertension. Heterodimers composed of alpha and gamma subunits have also been described. Structurally, each subunit consists of two different domains. The amino terminal region is resistant to proteases and is spherical, while the carboxy terminal region is sensitive to proteases. The latter contains multiple phosphorylation sites of protein kinase C, the binding site of calmodulin, which is necessary for binding to spectrin and actin. Various adducin β mRNAs have been described, which are selectively spliced and internally spliced at the 3′ end and encode different isoforms. The function of all the different isoforms is unclear. 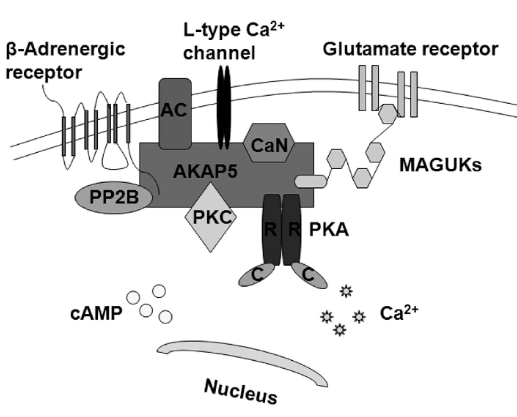 AKAP is a group of diversely structured proteins that have the common function of binding to the regulatory subunit of protein kinase A (PKA) and restricting holoenzymes to discrete locations within the cell. This gene encodes a member of the AKAP family. The encoded protein binds to the RKA-regulatory subunit of PKA, and also binds to protein kinase C and calcium phosphate phosphatase. It is mainly expressed in the cerebral cortex and may anchor the PKA protein to the post-synaptic density (PSD) and participate in the regulation of post-synaptic events. It is also expressed in T lymphocytes and may inhibit interleukin 2 transcription by disrupting calcineurin-dependent NFAT dephosphorylation.

AKAP5 is a protein coding gene. Diseases related to AKAP5 include Crouzon syndrome with acanthosis nigricans. Its related pathways include the transmission across chemical synapses and the integration of energy metabolism. Gene ontology (GO) annotations related to this gene include calmodulin binding and adenylate cyclase binding.