Caspase is a key effector of a physiological death process called apoptosis, although some are involved in cytokine activation rather than cell death. They are present in most of our cells as inactive precursors (zymogens), and once activated, they kill the cells. Caspase can be controlled in two ways. The processing and activation of caspase can be regulated by molecules such as FADD, APAF-1, members of the Bcl-2 family, FLIP and IAP. Active caspase can be controlled by a variety of inhibitors that directly interact with proteases. 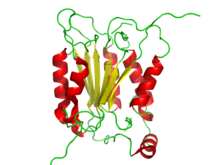 The virus must choose a cell's synthetic machinery to reproduce. Therefore, the most effective way to prevent virus replication is to have infected cells kill themselves. However, just as apoptosis is used to defend against viruses, viruses carry cell death inhibitors to prevent this response from their host cells. Several viral cell death inhibitors work by binding to activated caspase. The first caspase inhibitor identified was the vaccinia virus product cytokine response regulator A (CrmA), which was found to inhibit caspase 1 (interleukin 1b converting enzyme or ICE). The role of death has been previously identified by crmA, so it can be speculated that the virus uses CrmA to bind to active caspase 1 to reduce the defensive inflammatory response triggered by IL-1b. Although it is true, the identified caspase is a key mediator of apoptosis, and it has been clearly found that CrmA can be used to prevent defensive suicide in infected cells, leaving more time for virus replication. These observations also highlight the close connection between inflammation and defensive apoptosis.

CrmA can bind to and inhibit Caspase 1 with an inhibitory constant (Ki) of *10 picomolar and Caspase 8 with a Ki of less than 300 pM. In this way crmA can prevent production of mature IL-1b and IL-18 by Caspase 1, and apoptosis triggered by TNF receptor family members, which is mediated by Caspase 8.4 – 6 The inhibitory constants indicate crmA is unlikely to inhibit caspases 3, 6, 7 in vivo whilst there is some discrepancy in results regarding Caspase 10.8,9 Although it inhibits caspase 9 with a Ki of 2 nM in vitro, the fact that lymphocytes from Caspase 9 knock out animals were resistant to dexamethasone, but lymphocytes from transgenic mice expressing crmA were not,10,11 suggests crmA cannot inhibit Caspase 9 in vivo.

p35 is a baculovirus protein that blocks insect cells' defensive apoptotic response to viral infections. 19p35 not only inhibits several insect caspases, but also inhibits C. elegans CED-3 and mammalian cysteine proteases 1, 3, 6, 7, 8, and 10 with Ki values less than 10 nM,but does not inhibit non-cysteine cysteine proteases or serine proteases. After caspase cleaves its P1 residue (Asp87), p35 forms a complex that can be dissociated by SDS. 20 Since the cleaved subunit of p35 is still inhibited along with the cysteine protease, p35 can fundamentally function in different ways to display crmA.