Chromosomes are specific forms of DNA present in a cell during mitosis or meiosis. Within the nucleus, DNA is tightly wound around a protein called histone and packaged into a linear structure. When the cells do not divide, the chromosomes are not visible in the nucleus - as is the case under the microscope. However, the DNA that makes up the chromosome becomes more compact during cell division and is visible under the microscope. Each chromosome has a contraction point called the centromere (point) that divides the chromosome into two parts, the "arm." The short arm is the "p arm"; the long arm is the "q arm". The location of the centromere on each chromosome provides a unique shape for the chromosome that can be used to help describe the location of a particular gene. Chromosomes are species-specific, and vary in number, size, and morphology depending on the species, cell type, and stage of development. 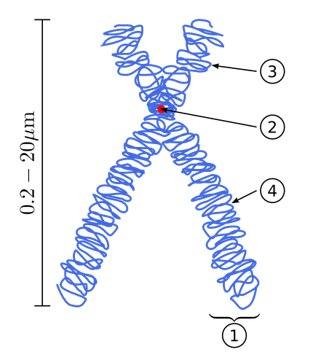 Figure 1. Diagram of a replicated and condensed metaphase eukaryotic chromosome. (1) Chromatid – one of the two identical parts of the chromosome after S phase. (2) Centromere – the point where the two chromatids touch. (3) Short arm (p). (4) Long arm (q).

In 1975 scientists presented evidence that chromatin structure is comprised of a repeating unit that they described as "beads on a string". Those beads are now known as nucleosomes, which are small protein discs that DNA (the 'string') wraps around. These nucleosomes are separated by 10-60 bp of linker DNA and coil to form an array along the DNA that is about 11 nm in diameter. This array is then supercoiled into a 30 nm fiber, which winds upon itself into the microscopic unit known as a chromosome. The nucleosome is comprised of 146 bp of DNA wrapped 1.7 times around a histone octamer, comprised of a histone H3/H4 tetramer flanked by two H2A/H2B dimers. Nucleosomes serve to package the DNA while still allowing access for gene transcription and DNA replication and repair. In addition to the electromicrographs showing beads on a string, nucleosomes were also identified by digestion of chromatin with nucleases resulting in approximately 200-bp ladders as well as by centrifugal isolation of 11.5S nucleoprotein complexes. It has long been thought that the behavior of chromatin is a direct result of the properties of these nucleosomes. Chromatin is now known to consist of DNA and histones, as well as a plethora of other protein complexes that assist in the DNA-related cellular functions. Histones play both structural and functional roles in these processes, which include replication, repair, recombination, transcription, and segregation. 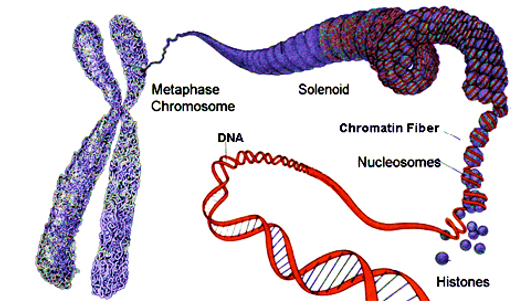 Chromosomes in eukaryotes are composed of chromatin fibers. Chromatin fibers are made up of nucleosomes (histone octamers, a portion of the DNA strand joined and wrapped). Chromatin fibers are packaged by proteins into a concentrated structure called chromatin. Chromatin is present in mitochondria, most of which is DNA, and the mother inherits a small amount. Chromatin is present in most cells, with a few exceptions, such as red blood cells. Chromatin can make very long DNA molecules suitable for the nucleus. During cell division, chromatin further condenses to form chromosomes visible under the microscope. The structure of the chromosome changes with the cell cycle. During cell division, chromosomes are replicated, split and successfully delivered to their progeny cells, ensuring genetic diversity and survival of offspring. Chromosomes can be repeated or not repeated. A repeating chromosome is a single duplex, and a repeating chromosome contains two identical copies (called chromatids or sister chromatids) and is joined by centromeres. 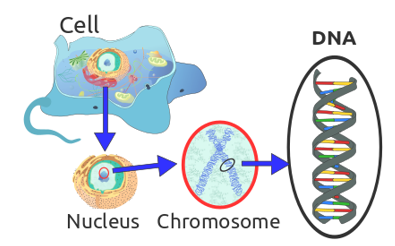 Figure 3. Organization of DNA in a eukaryotic cell.

Prokaryotes usually have one copy per major chromosome, but most cells can easily survive in multiple copies. For example, the symbiont of locust Buchnera has multiple copies of its chromosome, each cell having a replication range of 10-400 copies. However, in some large bacteria, such as Epulopiscium fishelsoni, there can be up to 100,000 chromosome copies. Like eukaryotes, the copy number of plasmid and plasmid-like minichromosomes is highly variable. The number of plasmids in a cell depends almost entirely on the rate of fragmentation of the plasmid - rapid division leads to high copy numbers.