The cytoskeleton is a kind of scaffolding present in all cells. It is made of protein that keeps cell shape, protects the cell and enables cells to move (using structures such as flagella and cilia). It helps transport inside the cytoplasm (the movement of vesicles and organelles, for example), and in cell division. The concept and the term (cytosquelette, in French) was introduced by French embryologist Paul Wintrebert in 1931. Eukaryote cells contain three main kinds of cytoskeletal filaments, which are microfilaments (actin filaments), intermediate filaments, and microtubules. They give the cell structure and shape. Cytoskeletal elements interact closely and often with the cell membrane and the endoplasmic reticulum.

Actin. Microfilament is also ubiquitous in all eukaryotic cells. It is a solid fiber with a diameter of 4nm-7nm. The average cell content is about 1%-2% of the total protein in the cell, but it is more active. The cells can account for 20%-30%. In general, cells are mainly distributed on the surface of cells, directly affecting the shape of cells. Microfilaments have multiple functions and are different in different cells. In non-muscle cells, it mainly plays a supporting role, non-muscle movement and information transmission.

Microfilaments are mainly composed of actin and act together with myosin, a molecular motor protein, to move cells. They are involved in the amoeba movement of cells, the cytoplasmic flow of plant cells, and the contraction of muscle cells.

Microtubule. Microtubules are a more complex molecule. The building block of this protein is a dimer called tubulin, which consists of two subunits: alpha-tubulin and beta-tubulin, tubulin and β-tubulin form a filamentary chain called a "raw strand". Microtubules were constructed by arranging 13 such strands around the hollow core. This creates a tubular structure (hence the name microtubule) which is harder, longer and wider than actin. Microtubules have unique tissue sites called "central bodies." Microtubule polymerization begins in this organelle. The end where faster polymerization occurs is called the positive end. The end where the slower polymerization occurs is called the negative end. Microtubules grow from the centrosome to the membrane by immobilizing their negative ends on the organelle. Once the microtubules reach the membrane, they separate from the central body and form a highly dynamic network. The formation of this network is aided by a group of proteins with a microtubule-binding domain called microtubule-associated protein (MAP). 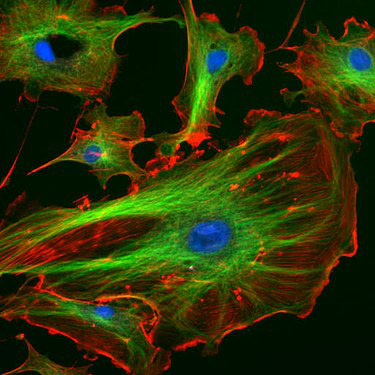 Figure 1. The eukaryote cytoskeleton. Actin filaments are shown in red, microtubules in green, and the nuclei are in blue.

In biology, the extracellular matrix (ECM) is a three-dimensional network of extracellular macromolecules, such as collagen, enzymes and glycoproteins, which provide structural and biochemical support to surrounding cells. Since multicellularity evolves independently in different multicellular lineages, the composition of ECM varies between multicellular structures; however, cell adhesion, intercellular communication and differentiation are common functions of ECM.

The animal extracellular matrix includes an interstitial matrix and a basement membrane. The interstitial matrix is present between various animal cells. The gel of polysaccharide and fibrin fills the interstitial space and acts as a compression buffer to resist the stress exerted on the ECM. The basement membrane is a flaky deposit of ECM with various epithelial cells resting on the ECM. Each type of connective tissue in an animal has an ECM: collagen fibers and bone minerals including ECM of bone tissue; reticular fibers and matrix including ECM of loose connective tissue; plasma is the ECM of blood.

The plant ECM includes cell wall components, like cellulose, in addition to more complex signaling molecules. Some single-celled organisms adopt multicellular biofilms in which the cells are embedded in an ECM composed primarily of extracellular polymeric substances (EPS).