G protein-coupled receptors (GPCRs) represent the largest family of cell surface receptors regulating many human and animal physiological functions. Their implication in human pathophysiology is obvious with almost 30–40% medical drugs commercialized today directly targeting GPCRs as molecular entities. However, upon ligand binding GPCRs signal inside the cell through many key signalings, adaptor and regulatory proteins, including various classes of heterotrimeric G proteins. Therefore, G proteins are considered to be interesting targets for the development of pharmacological tools that are able to modulate their interaction with the receptors, as well as their activation/deactivation processes. Most of the signals from outside the cell are transmitted to the interior of the cell through various receptors distributed on the cell surface, causing physiological responses of the cells and functioning accordingly. There are more than 1000 genes encoding GPCRs, accounting for more than 2% of the total human genome. GPCR is a seven-transmembrane receptor. There are at least thousands of human GPCR proteins. GPCRs are divided into three large families based on sequence homology: A, B, and C. There is at least 25% sequence homology in the transmembrane core region between members of each family, and the amino acids at some key sites are highly conserved.

Signaling of G protein-coupled receptors is required to be transmitted to downstream effector proteins (Effectors) by heterotrimeric guanine nucleotide binding protein (G-Proteins). The heterotrimeric G protein has three different subunit, Gα, Gβ and Gγ. The Gα subunit is large (~35-55 kDa) and has the ability to bind and hydrolyze guanine nucleotides. In most cases, when the Gα subunit binds to guanine diphosphate (GDP), it can bind to one Gβ subunit (~35 kDa) and one Gγ subunit (~8 kDa) to form a heterotrimeric complex. When the Gα subunit binds to guanine triphosphate (GTP), the Gα subunit is separated from the Gβγ complex to form two complexes with independent signaling functions. However, the Gα subunit has an intrinsic GTP hydrolysis activity that catalyzes the hydrolysis of GTP to GDP, resulting in the trimer returning to a relatively inactive GDP binding state. In most cases, the Gα subunit that binds to GTP is activated and has the ability to regulate the activity of downstream effector proteins, while the Gα subunit that binds GDP can only be active in rare cases.

The basic principle of a typical G-protein coupled receptor signaling is that when a specific ligand binds to the corresponding 7-transmembrane G-protein coupled receptor (GPCR), it will cause a conformational change in GPCR. The GPCR after the conformational change is able to bind to the corresponding GDP-bound trimeric G protein and induce a change in the conformation of the Gα subunit of the trimer, releasing the bound GDP. The Gα subunit in the vacant state quickly binds to GTP in the surrounding environment. The Gα subunit that binds GTP is immediately separated from the GPCR and Gβγ subunit complexes (Figure 1). The free Gα subunit and Gβγ subunit bind to downstream effector proteins, respectively, and signal transduction is achieved by modulating the activity of effector proteins. After the binding of the Gα subunit to the effector protein, the hydrolyzed GTP becomes GDP, so the Gα subunit closes its function under its own regulation, returns to the inactive GDP binding state, and forms a trimer with the Gβγ subunit, waiting for the next signal transduction. The trimeric G protein is used to achieve the "on" and "off" of the molecular signal through such a cycle, so that the signal can be correctly and effectively conducted. 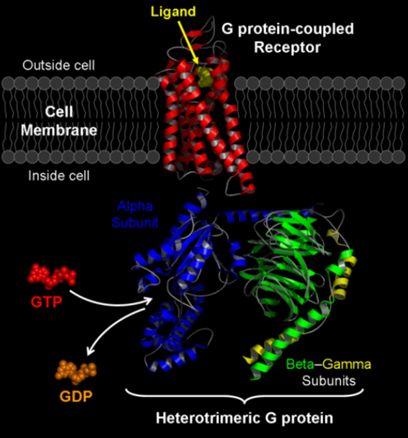