Members of the homeodomain (Hox) transcription factor family are characterized by the presence of a homology domain, which is a 60 amino acid helix-turn-helix DNA binding domain. A DNA sequence encoding a homologous domain is referred to as a "homology box" and a gene containing a homeobox is referred to as a "hox gene." The homeodomain is very highly conserved and consists of three helical regions that fold into a tight globular structure that binds to the 5'-TAAT-3' core motif. The recognition coil in the homologous domain binds to the DNA major groove, while the amino terminal tail contacts the DNA minor groove. Interestingly, homeodomains are also important for nucleoplasm transport of hox transcription factors. Members of the hox transcription factor family can function as monomers or homodimers to directly drive transcription of the target gene. The primary function of the hox transcription factor is to mimic the pre- and post-body axis of the embryo. More specifically, hox gene expression is critical for normal spatiotemporal limb and organ development.

The Hox gene is a type of gene in a living organism that regulates a biological form. Once these genes are mutated, a part of the body is deformed. Its mechanism of action is mainly to regulate other genes involved in cell division, spindle orientation, and development of bristles and appendages. The Hox gene is a member of the homeobox family. In most Hox genes, it contains a 180-nucleotide homeobox that can be transcribed to contain about 60 amino acid sequences. A homologous protein segment (homeodomain).

One of the characteristics of the Hox gene is that its order is related to its order of action and location. For example, a gene located closer to the 3' end (one end of the DNA) acts closer to the head. Moreover, members of the animal kingdom have similar Hox gene arrangements, products and modes of action. The influence of the Hox gene on animal patterns can lead to evolutionary biology research with clues about type transitions.

The Hox genes of various organisms behave in a similar manner. The genes near the 3' end are expressed in the front of the animal's body, and the 5' end is displayed in the back of the body. In addition to this rule, the Hox gene will behave differently in different states for some reason.

The human Hox gene can be divided into four gene clusters, which are located on different chromosomes. These chromosomes are No. 7, No. 17, No. 12 and No. 2. The human Hox gene is expressed in all uppercase when writing, such as HOXA, HOXB, HOXC and HOXD. In addition, these genes can be divided into 13 paralogous families, represented by numbers, such as HOXA4, HOXB4, HOXC4 and HOXD4. The DNA sequences of these family members are similar to the transcribed protein sequences. Among them, the mutation of HOXD13 causes syndiodactyly; while the mutation of HOXA13 causes hand-foot-genital syndrome (HGFS). In addition, 8 members of the HOXB cluster will affect the development of red blood cells, and HOXB4 and HOXB7 will affect T cells and B cells.

Hox proteins are transcription factors because they bind to specific nucleotide sequences on DNA, called enhancers, which activate or inhibit genes. The same Hox protein acts as a repressor of one gene and as an activator of another gene. For example, in Drosophila melanogaster, the protein product of the Hox gene Antennapedia activates a gene designating a second thoracic segment that contains legs and wings and inhibits genes involved in eye and antenna formation. Therefore, no matter where the antenna protein is located, legs and wings are formed, but no eyes and tentacles are formed. The ability of a Hox protein to bind to DNA is conferred by a portion of the protein known as the homeodomain. 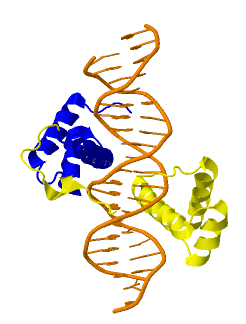 The N-terminal two helices of the homeodomain are antiparallel and the longer C-terminal helix is ​​roughly perpendicular to the axes established by the first two. It is this third helix that interacts directly with DNA via a number of hydrogen bonds and hydrophobic interactions, as well as indirect interactions via water molecules, which occur between specific side chains and the exposed bases within the major groove of the DNA. Homeodomain proteins are found in eukaryotes. Through the HTH motif, they share limited sequence Similarity and structural similarity to prokaryotic transcription factors, such as lambda phage proteins that alter the expression of genes in prokaryotes. he HTH motif shows some sequence similarity but a similar structure in a wide range of DNA-binding proteins. One of the principal differences between HTH motifs in these different proteins arises from the stereo-chemical requirement for glycine in the turn which is needed to avoid steric interference of the beta-carbon with the main chain: for cro and repressor proteins the glycine appears to be mandatory, whereas for many of the homeotic and other DNA-binding proteins the requirement is relaxed.