There are three main pathways for degradation of proteins in eukaryotic cells, the lysosomal pathway, the ubiquitination pathway, and the caspase pathway.

1. Lysosome pathway: Protein is degraded by the corresponding enzyme in the acidic environment of the same enzyme, and then transported to the cell fluid through the carrier protein of the lysosomal membrane to supplement the cytosol metabolism library. Intracellular proteins: Some proteins in the cytosol contain a KFERQ signal at the N-terminus, which can be recognized by HSC70. HSC70 helps these proteins to enter the lysosome and be degraded by proteolytic enzymes. Extracellular protein: enters cells through endocytosis or pinocytosis and degrades in lysosomes.

2. Ubiquitin-proteolytic enzyme pathway: an important pathway for specific protein degradation, involved in various metabolic activities of the body, mainly degrading Cyclin, spindle-related proteins, cell surface receptors such as epidermal growth factor receptor, Transcription factors such as NF-KB, tumor suppressor factors such as P53, oncogene products, etc.; intracellular denaturing proteins and abnormal proteins are also degraded by this pathway under stress conditions. This pathway is dependent on ATP and consists of two steps, namely polyubiquitination of the target protein. The polyubiquitinated protein is hydrolyzed by the 26S proteolytic enzyme complex.

The meaning of caspase means that the active site of this type of protease is the highly conserved cysteine ​​(cysteine) and the asparagine (aspase) which specifically cleaves the substrate, referred to as caspase. According to its specific function, it is divided into caspase (caspase1, 2, 4, 5, 8, 9, 10) and effect caspase (caspase 3, 6, 7, 11). Caspase is present in normal cells as a zymogen and is activated upon initiation of apoptosis. One pathway is mediated by the death domain of the death signaling molecule and the receptor, which causes caspase-8 to catalyze itself as a protease with hydrolase activity, hydrolyzing downstream caspase-3,6,7, etc., caspase-3,6 , 7 acts on the substrate to degrade, leading to apoptosis; the other pathway is mediated by cytochrome C located on the mitochondria, activates caspase-9, activates caspase-9 and activates caspase-3. The proteins that are degraded in apoptosis are: DNA damage repair enzyme, U1 small nuclear ribonucleoprotein component, lamin, actin and lining protein. The degradation of these enzymes and proteins leads to small apoptosis of cells. The body is eventually engulfed and digested by phagocytic cells. 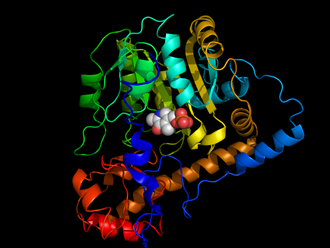