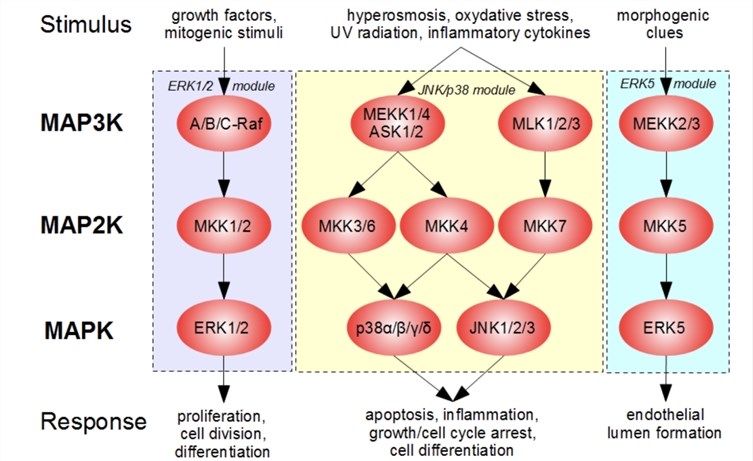 MAPK (Mitogen-activated protein kinase) is an important transmitter that transmits signals from the cell surface to the inside of the nucleus. MAPK is a group of serine-threonine that can be activated by different extracellular stimuli, such as cytokines, neurotransmitters, hormones, cell stress and cell adhesion Protein kinase. MAPKs are named because they are activated when cultured cells are stimulated by mitogens such as growth factors. All eukaryotic cells can express MAPK. The basic composition of the MAPK pathway is a conserved tertiary kinase model from yeast to humans, including MAPK kinase kinase (MAP kinase kinase kinase, MKKK), MAPK kinase (MAP kinase kinase, MKK) and MAPK It activates in turn, and together regulates many important cell physiological / pathological processes such as cell growth, differentiation, stress adaptation to the environment, and inflammatory response.

The mitogen-activated protein kinases (MAP kinase, MAPK) chain is one of the important pathways in the signal transmission network of eukaryotes, and plays a key role in the regulation of gene expression and cytoplasmic functional activities. The MAPK chain is composed of three types of protein kinases MAP3K-MAP2K-MAPK, which in turn transmits upstream signals to downstream response molecules through phosphorylation. MAPK belongs to the CMGC (CDK / MAPK / GSK3 / CLK) kinase group. Proteins closest to MAPKs are cyclin-dependent kinases (CDKs). MAPK is an important transmitter that transmits signals from the cell surface to the inside of the nucleus. Fourteen MKKK, seven MKK and 12 MAPK have been identified in mammalian cells. Analysis shows that these kinases belong to different subfamilies. The four subfamilies of MKKK have been identified, of which the Raf subfamily is the most thoroughly studied, including B-Raf, A-Raf, and Raf1. The MEKK subfamily is composed of 4 kinds of MEKK (MEKK1 ~ MEKK4). ASK1 and Tpl2 form the third subfamily of MKKK. The fourth subfamily is quite different from the above three. It includes MST (mammalian sterile 20-like), SPRK, MUK (MAPK upstream kinase), TAK1, and the least relevant MOS (molony sarcoma oncoprotein).

MAPK can be divided into 4 subfamilies: ERK, p38, JNK and ERK5. These pathways are named after them. For example, the MAPK pathway using JNK is called the JNK pathway.

MAPK signaling pathway is closely related to cell proliferation and differentiation. Continuous activation of MAPK signaling has been found in many malignant tumors. Cell proliferation greatly promotes tumorigenesis. Tumor metastasis and invasion are fatal causes. Of the mammalian MAPK pathways, the ERK pathway is the best studied and is relaxed in about one-third of human cancers. The ERK1 / 2 pathway plays an important role in the proliferation, differentiation, metastasis and invasion of tumor cells. Many studies have shown that the p38 MAPK pathway plays an important regulatory role in MMP (matrix metalloproteinase) produced by extracellular stimulation. MMP is a proteolytic enzyme closely related to tumor invasion and migration. In addition, the p38 MAPK pathway promotes tumor angiogenesis necessary to maintain tumor cell growth.

Cancer is usually exposed to various stress conditions, such as oxygen deficiency and inflammation. Many MAPK pathways are involved in stress signal transduction. Therefore, in response to inflammation, DNA damage, and apoptosis, certain kinases are activated by stress in cancer. Hypoxic conditions are widespread in solid tumors. Hypoxia signals stimulate the activation of MKP-1. MKP-1 further activates SAPK/JNK, thereby activating c-Jun. Active c-Jun promotes the transcription of multiple downstream genes, which is essential for the proliferation and survival of cancer cells. Abnormal MAPK signal transduction will affect most cancerous processes and is essential for the occurrence and development of cancer.

Figure 4. Schematic diagram of the drug mechanism of anticancer drug IDE196. (From IDEAYA)