Protein metabolism refers to the various biochemical processes responsible for the synthesis of proteins and amino acids (anabolism), as well as the breakdown of proteins through catabolism.

Protein catabolism is the process by which proteins are broken down into amino acids. Also known as proteolysis, amino acid degradation can then proceed.

Originally thought to disrupt only enzymatic reactions, proteases (also known as peptidases) actually help catabolize proteins by cleavage and produce new proteins that did not previously exist. Proteases also help regulate metabolic pathways. One way they do this is by cutting enzymes in pathways that don't need to run (ie, glycogen engraftment when blood glucose levels are high). This helps save as much energy as possible and avoids futile cycles. An ineffective cycle occurs when both catabolic and anabolic pathways are effective at the same time and at the same rate of reaction. Because the intermediates produced are consumed, the body does not generate a net gain. Energy disappears through a futile cycle. Proteases block this cycle by changing the rate of one of these pathways, or they can block one of these pathways by cleaving key enzymes. When bound to substrates, proteases are also non-specific, allowing a great deal of diversity within cells and other proteins because they can be more easily lysed in an energy efficient manner. 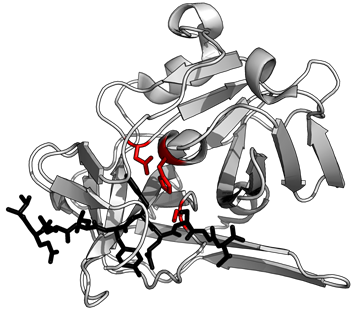 Exopeptidase is an enzyme that cleaves the ends of amino acid side chains mainly by adding water. There are two types of these enzymes: aminopeptidases and carboxypeptidases. Aminopeptidase is an enzyme that removes amino acids from the amino terminus of a protein. They exist in all life forms and are vital to survival because they perform many cellular tasks in order to maintain stability. This form of peptidase is zinc metalloenzyme, which is inhibited by transition state analogs. This simulation is similar to the actual transition state so it allows the enzyme to bind to it instead of the actual transition state, preventing substrate binding and reducing the reaction rate. Carboxypeptidases cleave at the carboxy terminus of proteins. Although they can catabolize proteins, they are more commonly used for post-transcriptional modifications.

Endopeptidase refers to the internal hydratase peptide bond in the peptide chain and breaks the bond. The three common endopeptidases are pepsin, trypsin, and chymotrypsin. Chymotrypsin undergoes a hydrolysis reaction and is cleaved after aromatic residues. The main amino acids involved are serine, histidine and aspartic acid. They all play a role in cleaving peptide bonds. These three amino acids are called catalytic triads, which means that all three amino acids must be present in order to function properly. Trypsin cleaves after long positively charged residues and has a negatively charged binding pocket at the active site. Both are produced as zymogens, meaning that they initially exist in their inactive state, and they are activated after cleavage by a hydrolysis reaction. Non-covalent interactions, such as hydrogen bonding between the peptide backbone and the catalytic triad, help increase the rate of reaction, allowing these peptidases to efficiently cleave many peptides.

Cell proteins are maintained at a relatively constant pH to prevent changes in the protonation status of amino acids. If the pH drops, if the pka of its R group is higher than the new pH, some amino acids in the polypeptide chain can be protonated. Protonation can change the charge of these R groups. If the pH is raised, some of the amino acids in the chain can be deprotonated (if the pka of the R group is below the new pH). This also changed the cost of Group R. Since many amino acids interact with other amino acids based on electrostatic attraction, changing the charge can break these interactions. The loss of these interactions changes the structure of the protein, but most importantly it changes the function of the protein, which may be beneficial or harmful. Significant changes in pH can even disrupt many of the interactions produced by amino acids and denature proteins.