Diabetes can strike anyone, from any walk of life. And it does – in numbers that are dramatically increasing. Today, more than 30 million Americans have been diagnosed with diabetes. Worldwide, more than 422 million people have diabetes.

So just what is diabetes?

Diabetes is a serious condition that causes higher than normal blood sugar levels. Diabetes occurs when your body cannot make or effectively use its own insulin, a hormone made by special cells in the pancreas called islets (eye-lets). Insulin serves as a “key” to open your cells, to allow the sugar (glucose) from the food you eat to enter. Then, your body uses that glucose for energy. But with diabetes, several major things can go wrong to cause diabetes. Type 1 and type 2 diabetes are the most common forms of the disease, but there are also other kinds, such as gestational diabetes, which occurs during pregnancy, as well as other forms.

The blood insulin level can be measured in international units, such as µIU/mL or in molar concentration, such as pmol/L, where 1 µIU/mL equals 6.945 pmol/L. A typical blood level between meals is 8–11 μIU/mL (57–79 pmol/L). 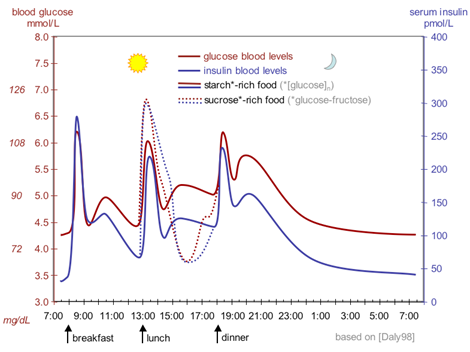 Figure 1. The idealized diagram shows the fluctuation of blood sugar (red) and the sugar-lowering hormone insulin (blue) in humans during the course of a day containing three meals.

There is significant genetic heterogeneity in both type 1 and type 2 diabetes. Diabetes has a family tendency, and 1/4 to 1/2 patients have a family history of diabetes. There are at least 60 genetic syndromes clinically associated with diabetes. Multiple DNA sites are involved in the pathogenesis of type 1 diabetes, and the DQ site polymorphism in the HLA antigen gene is most closely related. A number of definite genetic mutations have been found in type 2 diabetes, such as insulin genes, insulin receptor genes, glucokinase genes, mitochondrial genes, and so on.

Obesity caused by excessive eating and reduced physical activity is the most important environmental factor in type 2 diabetes, which makes individuals with a genetic susceptibility to type 2 diabetes prone to disease. Patients with type 1 diabetes have abnormal immune systems, which cause autoimmune reactions and destroy insulin beta cells after infection with certain viruses such as coxsackie virus, rubella virus, and mumps virus.

Insulin is a protein hormone secreted by pancreatic islet beta cells in the pancreas stimulated by endogenous or exogenous substances such as glucose, lactose, ribose, arginine, glucagon and the like. Insulin is the only hormone in the body that lowers blood sugar and promotes glycogen, fat, and protein synthesis. Exogenous insulin is mainly used for the treatment of diabetes. 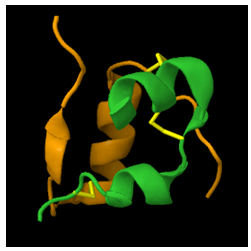 The amino acid sequence of insulin is highly conserved. Bovine insulin differs from humans only by three amino acid residues, while porcine insulin differs only by one. Insulin is produced and stored in the body as a hexamer (a unit of six insulin molecules), while the active form is a monomer. Hexamers are inactive forms with long-term stability and can be used as a way to keep highly reactive insulin protected but still readily available. Hexamer-monomer conversion is one of the main aspects of insulin preparations for injection. Hexamers are much more stable than monomers, which is ideal for practical reasons. However, because the diffusion rate is inversely proportional to the particle size, the monomer is a faster-reacting drug. Fast-response drugs mean that insulin injections need not be taken several hours before a meal, which in turn makes the scheduling of diabetics more flexible. Insulin can aggregate and form fibrillar finger-like β-sheets. This leads to amyloidosis and prevents long-term storage of insulin. 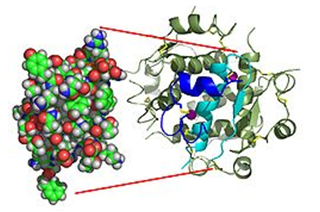 Insulin deficiency is a protein catabolic state. In vivo studies have shown that insulin can enhance the uptake of short-chain amino acids in cells, stimulate RNA transcription and translation, increase gene expression of albumin and other proteins, and inhibit liver proteolytic enzymes. In IDDM patients, most systemic protein renewal studies have shown that insulin deficiency increases protein breakdown and increases amino acid oxidation, and insulin treatment reverses these effects. Recent studies have shown that a significant increase in leucine transamination during insulin deprivation contributes to leucine catabolism in patients with IDDM. Protein synthesis in an insulin-deprived state has also increased, albeit to a lesser extent than proteolysis, and this increased systemic protein synthesis is reduced by injecting insulin. Therefore, the effect of insulin is mainly mediated by its effect on proteolysis. Metabolic disorders in diabetes often involve disorders of substrates and hormones other than insulin. The effects of insulin deficiency observed in diabetics vary among different body parts. Most of the effects of insulin on protein synthesis appear to occur in non-muscle tissues, especially in the visceral area. In addition, insulin has different effects on liver protein synthesis, that is, it inhibits fibrinogen synthesis and promotes albumin synthesis. The anti-metabolic effect of insulin on IDDM patients is mainly due to its inhibition of protein breakdown. Insulin-induced net protein anabolic occurs mainly in skeletal muscle. In NIDDM patients, these effects are not noticed and may be due to residual endogenous insulin secretion. In fact, treatments that lead to improved glucose metabolism in obese NIDDM patients do not affect protein metabolism.